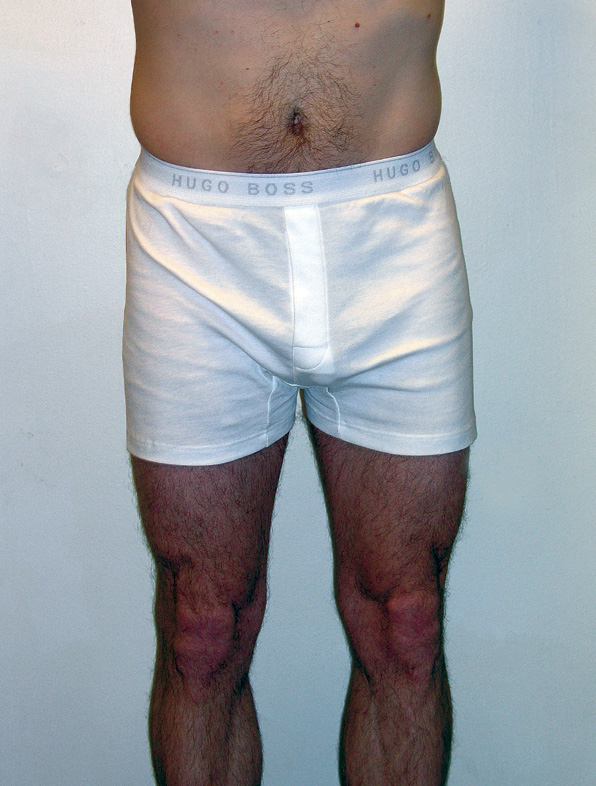 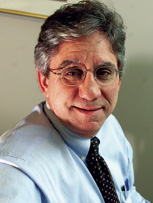 A Message from
Dr. Hartley Stern
Since integrating with The vice including physicians, nurses, ad- closely with other regional partners Ottawa Hospital last Jan- vanced practice nurses, social work- including the Community Care Ac- uary, the Cancer Centre has ers, spiritual care providers and secre- cess Centre, Sisters of Charity Health made great strides in taries. The team provides multidisci- Service and the Hospice at Maycourt.
streamlining cancer care in plinary advice in both the inpatient We are taking a lead role in local and Eastern Ontario.
and outpatient setting to facilitate and regional palliative care network plan- support the work of the patient's pri- ning and held a daylong retreat held In a little over a year, we have been mary oncologist or physician. The in January that has left the team in- able to include a number of aspects of team works closely with the primary vigorated and committed to taking a cancer care into one comprehensive care team, patients and families to en- leadership role in education and re- program. Last year, integration meant sure comfort, compassion and dignity search in the field of palliative care.
that prevention, screening, ambulato- for complex symptom management ry care and a portion of in-patient The changes we're seeing in the and end of life care.
care joined forces. Soon after pallia- palliative care structure, along with tive care followed and, just weeks The team respects and promotes the current move towards regionaliza- ago, the Cancer Centre joined includ- ongoing open communication tion in health care will result in ed the remaining in-patient care unit amongst patients, families and health stronger partnerships, increased coor- and bone marrow transplants. It has care providers.
dination and enhanced care. This, been a wonderful and exciting year of combined with recent investment in This is truly good news as recent forging new partnerships and of tak- cancer surgery by the Ministry of recommendations from Cancer Care ing the initial steps towards our goal Health, will allow the Cancer Centre Ontario and Ministry of Health have of streamlined care.
to continue to lead the changes to- given priority to palliative care. The wards the most efficient and timely One of the most important changes Ministry's initiative to establish re- delivery of high quality cancer ser- for cancer patients and their families gional palliative care networks pro- vices in Eastern Ontario.
was the inclusion of palliative care in vided the impetus for the team to re- the program. Recognized by the World examine its role, vision, mission and Health Organization as an "approach model of service delivery. As the that improves the quality of life for largest palliative care consult team in patients and their families," it is an es- Canada, it is critical that the team Dr. Hartley Stern, sential service that deserves increased uses its resources to ensure best prac- Regional Vice-President attention, funding and support.
tice and maximum effectiveness of The Ottawa Hospital Regional care for its patients.
The Ottawa Hospital's Palliative Care team is a specialist consult ser- Our Palliative Care team is working

The Ottawa Hospital Regional
Cancer Centre presents
Life with Cancer The Ottawa Regional Cancer Centre Foundation Dr. Douglas Gray, Co-Chair Jamie Milner, Co-Chair Linda Eagen Volume 9, Issue 1
Shannon Gorman Ted Johnston Gail Macartney • • • • • • •
Diane Manii Allison Neill Christine Penn Letter from the Editor
Tom Sparling Dr. Hartley Stern "I've just seen Challenge magazine, and I wanted to tell you." I've had a number of visitors and phone calls lately saying that. The comments were from people I've known for a long time, but who had- Louise Rachlis n't been aware of my connection to Challenge. They hadn't seen the ART DIRECTOR
magazine, because they hadn't needed it.
Chris Macknie But then, while visiting a sick friend, or accompanying a relative to the Cancer Centre, or going to an appointment there themselves, they Challenge.Life with Cancer had come across the magazine and picked it up to read.
is produced in co-operation with the And they had kept reading. It was there when they needed it.
It's a good feeling to know that in the crush of what can be cancer in- CanWest Publications Inc.
formation overload, we are here and able to help.
In this issue, you'll find information and personal stories on many kinds of cancer, and For more information or to advertise in this magazine, call: particularly this issue, testicular.
The Ottawa Regional
We hope you'll find it useful.
Cancer Centre Foundation
Telephone: (613) 247-3527
Fax: (613) 247-3526
CPC Publication Agreement #40017370 Revenue Canada Charitable Registration No. 898311170 RR0001 • GST #89831117ORT The Ottawa Hospital Regional Cancer Centre Civic Division • 190 Melrose Ave., Ottawa K1Y 4K7 – Valberg Imaging General Division • 503 Smyth Rd., Ottawa K1H 1C4 A program of The Ottawa Hospital Affiliated with the University of Ottawa Challenge.Life with Cancer is published by the Ottawa Regional Cancer Centre Foundation.
Editorial in this publication is not intended as medical advice, and publisher disclaims any liability for use of medical information or any damages that may arise from reliance on such information.
Material from this magazine may be reprinted with written permission of the Editorial Board of the ORCC Foundation.
Fondation du
Challenge • Spring/Summer 2005 3 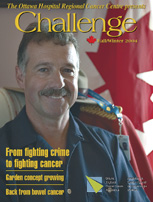 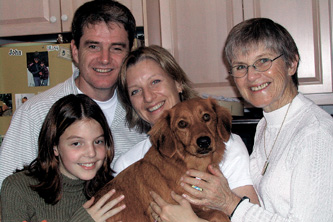 Letters from our readers
Editor, Challenge I met while I volunteered at TOHRCCas well as some current and past pa- This past summer presented a cou- tients. It is a small world! ple of different opportunities for meto move back into the work force after Some also have since commented my medical retirement.
upon the Challenge magazine.
I was offered a chance to travel to I hope in a small way that this arti- Jordan to assist the Canadian Govern- cle also has been a positive contribu- ment in the training of new Iraqi Po- tion to the great work the foundation lice cadets, however as one would does for cancer patients in Ottawa and imagine, my wife and family were not the surrounding areas, through the too keen on Dad being away. I too re- Cancer Centre, its great staff of physi- considered what life had dealt me cians, nurses, technicians, support through the past 26 months so I de- staff and volunteers.
Please count on me to join in as a It was the next week that an oppor- volunteer for the Telethon again this tunity opened at Algonquin College year. Let me know how I can help! and within two weeks I not only wasback teaching, but I took on anotherrole as coordinator for the newly ex- Thursday in the Upper Ottawa Valley panded two-year police diploma pro- and loving it.
Pete Thompson was the cover story gram at the Pembroke Campus.
Being at Algonquin, I have met a on the previous issue of Challenge So here I am Monday through great number of caregivers of patients Magazine. Editor, Challenge When my son read the article (Challenge, Fall/Winter 2004), hiscomment was "I'm reading the arti-cle, and it seems like it happened toanother person. It appears to havehappened so long ago. You're back toyour old energetic self again." Since our last chat we were blessed with a second grandson. I had a won-derful summer of cycling, socializing,weekend guests, and family dinners. Ilogged in close to 8,000 km on mybike. I cycled with the Ottawa BicycleClub, and participated in the 15 kmtime trials in Ottawa, and the hilly 40km time trials in Calabogie. My hus-band and I are looking forward to awinter of skiing and part time ski in-struction.
Mary Ajersch, right, with her daughter, son-in-law, his daughter, and the dog.
I have to point out a slight oversight in the article. There's a photo of me, Thanks again for your time, and my daughter, son-in-law, his daughter, continue your good work.
and the dog. Under the photo it states"The Ajersch children, Peter, Jennifer,and Michael." Most people wouldn't notice, but our family is teasing Peter, (Note: See a further letter from saying he's the young girl in the Mary on page 18 of this issue.) Challenge • Spring/Summer 2005

Volume 9, Issue 1 – Spring/Summer 2005
• • • • • • •
Two generous people, Matt Salvatore and Chris Jurewicz, get together and charities benefit Offering security and hope for the future Ignoring the odds
Barry Bokhaut celebrates ‘5 Alive' A little slice of heaven
Cottage Dreams creates precious memories Book Reviews
Jean Seasons reviews testicular cancer autobiogra-phies, and What About My Kids? is launched as a parent resource. SHOULD KNOW ABOUT A Helping Hand
The special nature of the Hospice at May Court TESTICULAR CANCER The Foundation Pages
Adam Hendriks stresses Many exciting upcoming events the importance of early checks, Keeping Spirits Up
and other important advice Mary Ajersch shares her experience and advice On the Frontier
Dr. Lorimer explains clinical trials Just Wanted to Help
Challenge introduces a new column FOR EARLY DETECTION by writer Rosa Harris-Adler Support groups
and information services
Challenge • Spring/Summer 2005 5 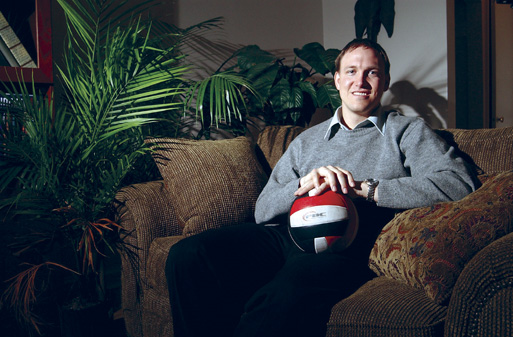 THE ENTERPRISE EXPLORER Issue 1 – Autumn/Winter 2014 www.enterprisepractice.co.uk Message from the Chair Surgery Opening . Welcome to the first issue of the Enterprise Practice Patient Group newsletter, which we hope you will find interesting and informative. Our main objective as a Patient Participation Group (PPG) is to enhance services at