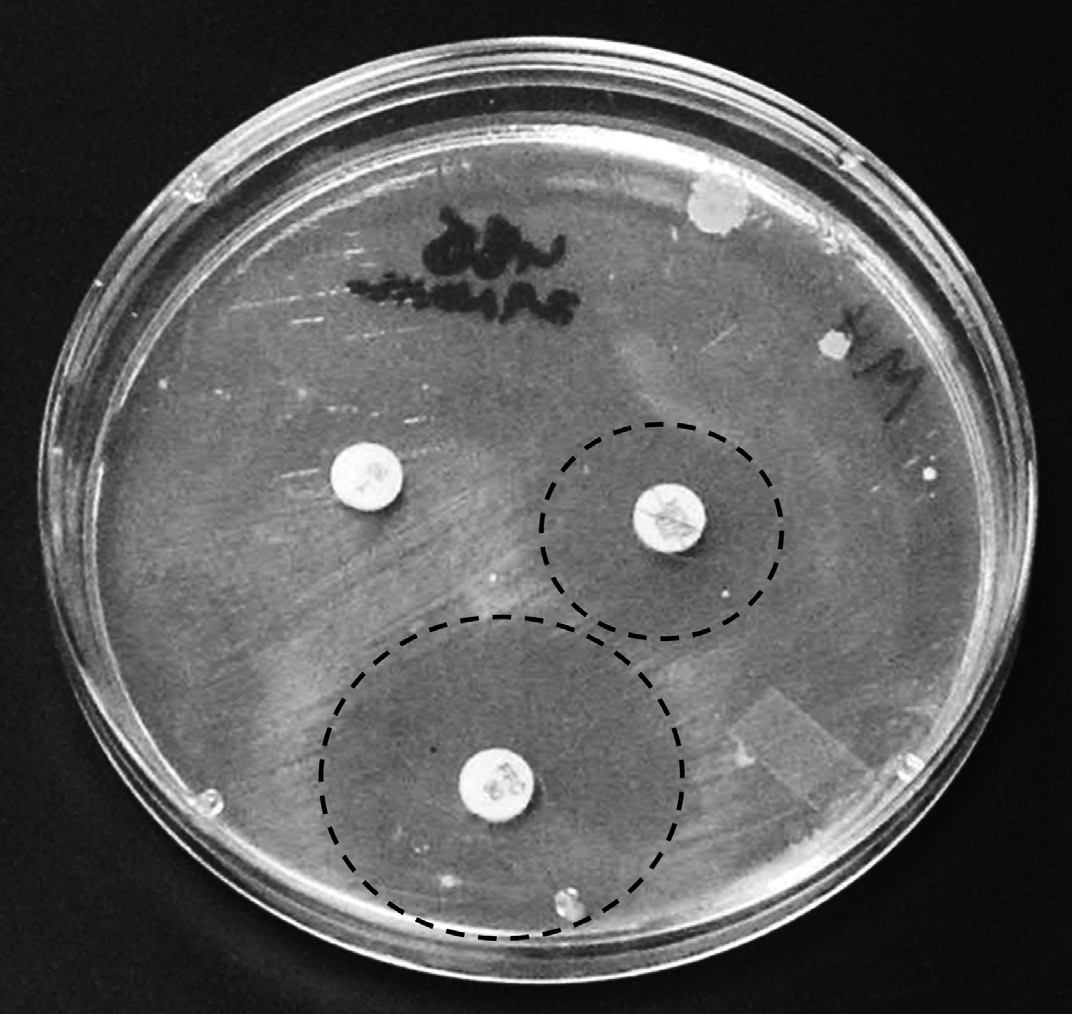 Selecting the proper medicated feed
salmoninarum, which is the cause of bacterial kidney disease in salmonids, or Mycobacterium species, which To optimize the response to medicated feed, the can occur in many food fish species including salmon and causative agent needs to be identified and a sensitivity test hybrid striped bass. This is why it is important to work should be performed to ensure that the correct antibiotic with a fish health specialist/fish veterinarian for proper is used. A sensitivity test (Fig. 1) shows the relative suscep- tibility of the disease-causing bacteria to various antibiot- ics. Small discs, each containing a different antibiotic are Treatment strategies
placed on an agar plate that has been recently inoculated with the isolated disease causing bacteria. If bacteria are Economics and other factors also help to determine unable to grow in the presence of a particular antibiotic, a the appropriateness of using medicated feed. If the cost clear area is present surrounding the disc. If the drug has of the treatment is more than the cost of the fish, it does no effect, the bacteria will grow up to or over the top of the not make economic sense to treat the fish. When possible, disc. The clear area is measured and compared to a stan- expensive treatments should be avoided unless they are dard to determine if the antibiotic would be effective in likely to save money for the producer. A good example is treating the bacterial infection. A fish health professional the treatment strategy for Enteric Septicemia of Catfish or disease diagnostic laboratory can perform the sensitiv- (ESC) caused by Edwardsiel a ictaluri. This disease occurs ity test for you and recommend an antibiotic to be used. when temperatures are between 68 and 82 °F (20 and 28 There are situations when antibiotic treatment may be °C) when the bacteria are in their optimum growth range. ineffective. Some disease outbreaks are caused by bacte- Fish dying from ESC will usually stop dying as tempera- ria that are resistant to particular antibiotics and some tures rise above 82 °F (28 °C) or fall below 68 °F (20 °C). bacterial diseases cannot be controlled with currently- Medicating fish just before temperatures are forecast to approved medicated feed. For example, there are no FDA be in the 90s, for example, is often not advised, because approved antibiotics currently available that are effective the disease stops on its own due to the high temperatures. against an active outbreak associated with Renibacterium Using this type of strategy can save a significant amount of money on medicated feed purchases. Mixing medicated feeds
All of the approved antibiotics for use in food fish are Type A medicated feeds. Producers may purchase Type A premixes only if they hold a valid feed mill license. The VFD form issued by the veterinarian will contain mix- ing or dilution instructions. Medicated feed mill license applications (Forms FDA 3448) may be obtained from the Public Health Service, Consolidated Forms and Publica- tions Distribution Center, Washington Commerce Center, 3222 Hubbard Rd., Landover, MD 20785, or electroni- cally from the Center for Veterinary Medicine home page at http:/ www.fda.gov/cvm. Additionally, a set of guidelines for manufacturing feed, referred to as Good Manufacturing Practices (GMPs), are designed to prevent feed contamination and provide reasonable assurance that medicated feed additives are used properly. These guidelines serve as Food and Drug Administration (FDA) Figure 1. Antibiotic discs on a bacterial plate (white circles). Clear area
regulations. Everyone involved in producing medicated around the disc (highlighted by the dash lines) indicates that the antibiotic or non-medicated feed, whether at a commercial off-farm is useful in fighting the infection. Clear areas are measured in mil imeters plant or with an on-farm mill or grinder/mixer, must and compared with standards in order to determine if antibiotic is effective comply with the GMPs.
against the bacteria disease.
Storage of medicated feed
Use of medicated feed
As with all fish food, medicated feed should be stored in alternative species
in a cool, dry place. If available, a freezer is ideal for stor- ing fish feed for extended periods provided it does not At the time of this writing, FDA will allow veterinar- get moist or wet. Antibiotics and essential nutrients will ians to prescribe the use of Terramycin® 200 for Fish and deteriorate rapidly in a warm, moist environment. Exces- Romet®30 or Romet® TC medicated feed for fish species or sive decomposition of antibiotics as a result of improper diseases other than those listed on the label. For example, storage can result in unsuccessful treatment. Any unused Terramycin® 200 for Fish, medicated feed that has been medicated feed, stored at room temperature, should be approved for use in catfish, may be prescribed extra-label discarded after 3 to 4 months. However, a VFD medicated for hybrid striped bass by a licensed veterinarian. Flor- feed is not valid 5 days after the prescribed treatment fenicol (Aquaflor®) cannot be legally used on species other terminates. Thus florfenicol (Aquaflor®) is a one-time use than those on the label, unless it is used under an INAD. purchase and any extra feed must be discarded and not Check with a qualified fish health professional or veteri- kept for future use. Be sure to follow all state guidelines narian on the current status of medicated feed use regula- for disposal of unused or old medicated feed.
tions before treating your fish. Additional information on use of medicated feeds approved for use in food fish can be found at: http:/ www.fda.gov/AnimalVeterinary/Development http:/ www.fws.gov/fisheries/aadap/home.htm Quick Reference Guide to Approved Drugs for Use in Aquaculture. 2011. http:/ www.fws.gov/fisheries/aadap/ SRAC fact sheets are reviewed annual y by the Publications, Videos and Computer Software Steering Committee. Fact sheets are revised as new knowledge becomes available. Fact sheets that have not been revised are considered to reflect the current state of knowledge.
The work reported in this publication was supported in part by the Southern Regional Aquaculture Center through Grant No. 2010-38500-21142 from the United States Department of Agriculture, National Institute of Food and Agriculture.