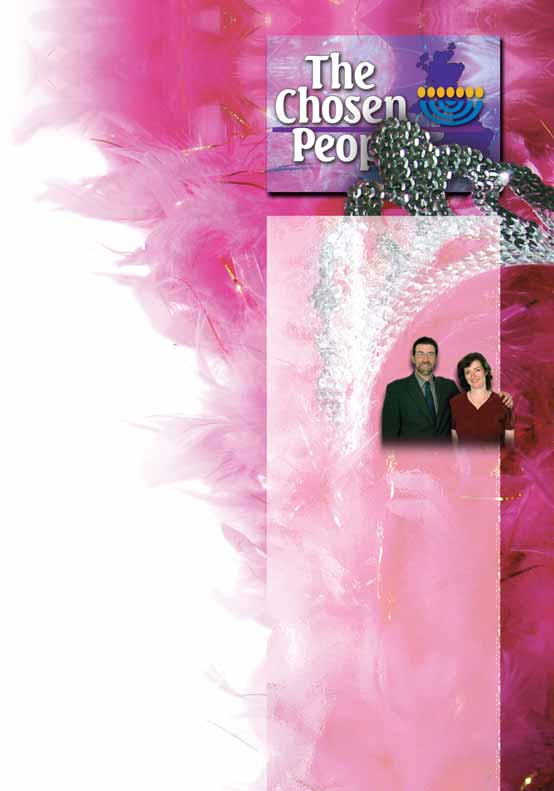 FEB_UKNL0702_7.qxp 4/17/07 9:43 PM Page 1 continued from page 1
Need Help Sharing Kingdom, yet this is very much home. Jewish people have lived in England since the readmission of Jews to England under Oliver Cromwell in 1656. We UK Director Daniel Nessim
don't really expect that antisemitism will disappearbefore the greatest Semite of all history, Yeshua,occupies His throne in Jerusalem to deliver and govern His people. Until then, we have theopportunity to teach about personal deliverance from the power and penalty of sin through Him. the streets of London and Jews in Israel are also painfully aware of the isolation Vol. 2, Issue 3 February, 2007 / Shevat 5767 the United Kingdom. This is their country suffers from, which is reasonably felt as no less true of the Jewish people.
a form of antisemitism. However, God continues His "I'm so lonely," "I'm so bored," and work in the midst of this situation. We regularly hear "I have no friends," are words we've wonderful reports of the growth of the Church in heard from more than one Jewish Israel. Our ministry there is a significant part of Orthodox friend. Sadly, we have only from around the World God's work over there, and our Messianic Centre in recently become keenly aware of their Jerusalem is more than fully utilized on a daily basis.  Adam and Susannah Ruditsky
loneliness. These are the people we Adam, from White Plains, New York, writes, ‘In For this, we need workers, called and committed to reach out to with the Gospel, and we 1984, I became convinced that Yeshua was the How to Introduce
evangelizing and discipling Jewish people. We care for them. Around the table or in Jewish Messiah and I Your Jewish Friends
continue to pray that God would bring people with a people's homes and coffee shops, we seek to dedicated my life to passion for these things. Our fellowship of Jewish to the Messiah
share our lives and most importantly, our bringing the Good believers and unbelievers continues to experience the relationship with the One who gives us life. News of Yeshua to We often find it difficult to share the Gospel with Lord's blessing, and we have been quite encouraged those whom we do not know well or feel we do The Lord stated long ago that it is possible for my own people. In to have new people coming to the last meeting. people to place stumbling blocks between not understand. This manual will help you reach May the Lord bless you as you bless the descendants others and the Kingdom of God (Romans wife, Susannah Lipson, Jewish people with the message of salvation.
of Abraham (Genesis 12:1-5).
14:13). Sadly, there are many stumbling at a Messianic conference in Grantham, £5 price plus £2 P&P
Yours in Messiah Yeshua, blocks between the Jewish people and their Pennsylvania. She is from London and was raised For more Messianic Jewish products, visit us online at
Messiah. These are cultural, historical, and as a second generation Jewish believer. theological in nature, and not easy to ‘We are currently planting a Messianic overcome. Still, some do come to faith in congregation among the 150,000 Jewish Yeshua, and it is our hope that we will begin people in Westchester County. This mostly The Chosen People Newsletter to see that happen more and more often in affluent and nonreligious community needs to our corner of the world, especially in the lives Chosen People Ministries has been taking the love of the Messiah to Jewish people worldwide since 1894.
hear that the Messiah has come.
of those to whom we are reaching out. One of Chosen People Ministries UK Board of Directors: Mr. Tim Bath • Mrs. Yvonne Bath • Dr. Mitch Glaser the greatest of these stumbling blocks is ‘I met Steve, an atheist, at one of our services.
• Rev. Kenneth Jefferson • Mr. Daniel Nessim • Rev. Keith Page • Dr. John Pretlove, Chair • growing antisemitism in the ‘Christian' world.
Over a period of time, we developed a friendship, Mr. Peter Pretlove, Treasurer • Rev. Caroline Hewlett (advisor) • Mrs. Elizabeth Hockenhull (advisor) and when crisis came into his life, I had the Soon it will be Purim, the first of the Jewish Serving in: Argentina • Australia • Canada • Great Britain • France • Germany • Israel • Mexico • Russia • opportunity to share Messiah and minister the holidays of spring. Like those who first Ukraine • United States Lord to him. His life has been transformed, and celebrated Purim, about 2,500 years ago, Jews The Chosen People UK Edition newsletter is published bimonthly by Chosen People Ministries. For more today, I continue to disciple him.' information or to receive a copy, write to: Chosen People Ministries, PO Box 47871, Golders Green, in the United Kingdom live dispersed from the LONDON NW11 1AL. Senior Editor: Zhava Glaser; Editor: Andrew Sparks; Design: Lois Gable. Land that God gave to the forefathers of the We look forward to the day when Susannah and Jewish people. British Jews are quite aware of her husband, Adam, come to visit us here in 2007 Chosen People Ministries (UK) Registered Charity No. 1095644, a company limited by guarantee in England the rising tides of antisemitism in the United London, her home city! No. 4611406. Printed in the United Kingdom. VISIT US ON THE WEB AT WWW.CHOSENPEOPLE.ORG.UK.
continued on page 4 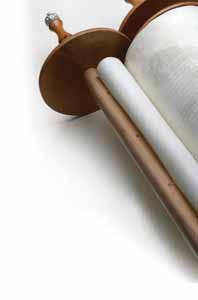 FEB_UKNL0702_7.qxp 4/17/07 9:43 PM Page 3 had attempted to enact a secret plan of his has told us that He own, but God would not allow it to come holds some secrets that preserved the Jewish people from the He may or may not evil Haman! The implications of this The secret plan for the destruction of the choose to reveal to you destruction would have been Jewish people created by Haman came head and me. Perhaps we immeasurable. Some of the Bible God's Will for Israel to head with the revealed plan of God. The could not handle the weight would not have been written and the Our world loves conspiracy theories.
Lord's revealed plan was not a secret or of such knowledge. Nevertheless, Messiah of Israel would not have been born! Unfortunately, many of those theories cast conspiracy. Centuries earlier, He had we may be curious about the things Neither Mary nor Joseph, nor Elizabeth nor the Jewish people in a negative light! spoken to Abraham and said: the Lord has selected to withhold from John would have existed—all would have us. The curiosity is natural, but we must Historically, conspiracy-minded antisemites been destroyed by Haman's hand. Clearly Get out of your country, from your family and be patient. One day we will know a lot have accused the Jewish people of a secret there was much at stake for the entire world.
from your father's house, to a land that I will more, as we will know Him because we will plan to achieve world domination. Theories show you. I will make you a great nation; I will Haman had actually tried to convince King be like Him when we see Him as He is like this, some recorded in the terribly bless you and make your name great; and you Ahasuerus that the Jewish (1 John 3:2-3).
antisemitic and destructive volume, shall be a blessing. I will bless those who bless people had formed a The Protocols of the Elders of Zion, you, and I will curse him who curses you; and Meanwhile, He has clearly revealed for all conspiracy to reject the have become the basis for the in you all the families of the earth shall be mankind to read in His Word that the Land king's leadership. He persecution of the Jewish people. blessed. (Genesis 12:1-3) of Israel is promised to the descendants ofAbraham, Isaac and Jacob. It is not a secret! The president of Iran recently held The Lord confirmed His creation of the Therefore, until Messiah returns, believers a Holocaust Denial conference in Jewish people and the granting of the Land should certainly support the right of the Tehran. He and many others declared Such a Time as This" to the descendents of Abraham (Genesis Jewish people to possess the Land of Israel.
the Holocaust to be a fraud—a Jewish Purim (Lots) is a holiday of 26:2-5, Genesis 35:9-12). Through them conspiracy to seek the sympathy of the unrivalled celebration in Jewish life. The would come the ‘seed,' Yeshua (Jesus) But, more importantly, if we want to see the world in order to bolster the case for the words from Esther 4:14 "for such a time as through whom all the peoples of the world remainder of God's revealed word come to existence of the State of Israel. His is a this" sum up the gripping drama of an would be blessed in turn. Clearly the pass then we should take seriously Paul's disgraceful and distasteful view—especially unlikely heroine who was willing to stand in destruction of the Jewish people was in statement in Romans 1:16: for those who believe that the Jewish people the gap for the sake of her people. Satan's plan—but it was not in God's.
For I am not ashamed of the gospel of Christ, Purim is celebrated with joyful gatherings are God's chosen people and for the many for it is the power of God to salvation for and special foods such as the hamentashen— Allied soldiers who had the unspeakable everyone who believes, for the Jew first and also a delicious cookie in the shape of the villain Have you ever wondered if God had a secret task of liberating the concentration camps. for the Greek. Haman's tricornered hat. Children perform plan? The truth is—He does! But, it is not a We know that the Holocaust really skits called Purimshpiel, playing the parts of conspiracy. In Deuteronomy 29:29, Moses, As believers in the Messiah Yeshua, we happened and that it was not part of a the Persian King Ahasuerus, Mordecai, under the inspiration of God Himself writes: should do everything within our power to conspiracy theory. Haman, and, of course, the lovely Queen make sure the Jewish people hear the Esther (Hadassah in Hebrew). During the The secret things belong to the LORD our Gospel—in Israel and throughout the The Purim Conspiracy services, children drown out the name of God, but those things which are world. This is why your partnership In a few weeks' time, Jewish people around Haman during the reading of the megillah revealed belong to us and to our with Chosen People Ministries is so the world will be celebrating the Festival of (scroll) with special noisemakers called children forever, that we may important. By praying for our staff and Purim. This is a favourite Jewish festival for a groggers. Even the grown-ups join in the do all the words of this law. supporting our staff and ministries, you are variety of reasons. The most significant of Purim is celebrated on the fourteenth and There it is, embedded in the heart taking hold of your role in reaching Jewish these is the fact that God fifteenth day of the month of Adar. This year, of the Torah. The Lord people for Jesus.
it begins at sundown on March 3.