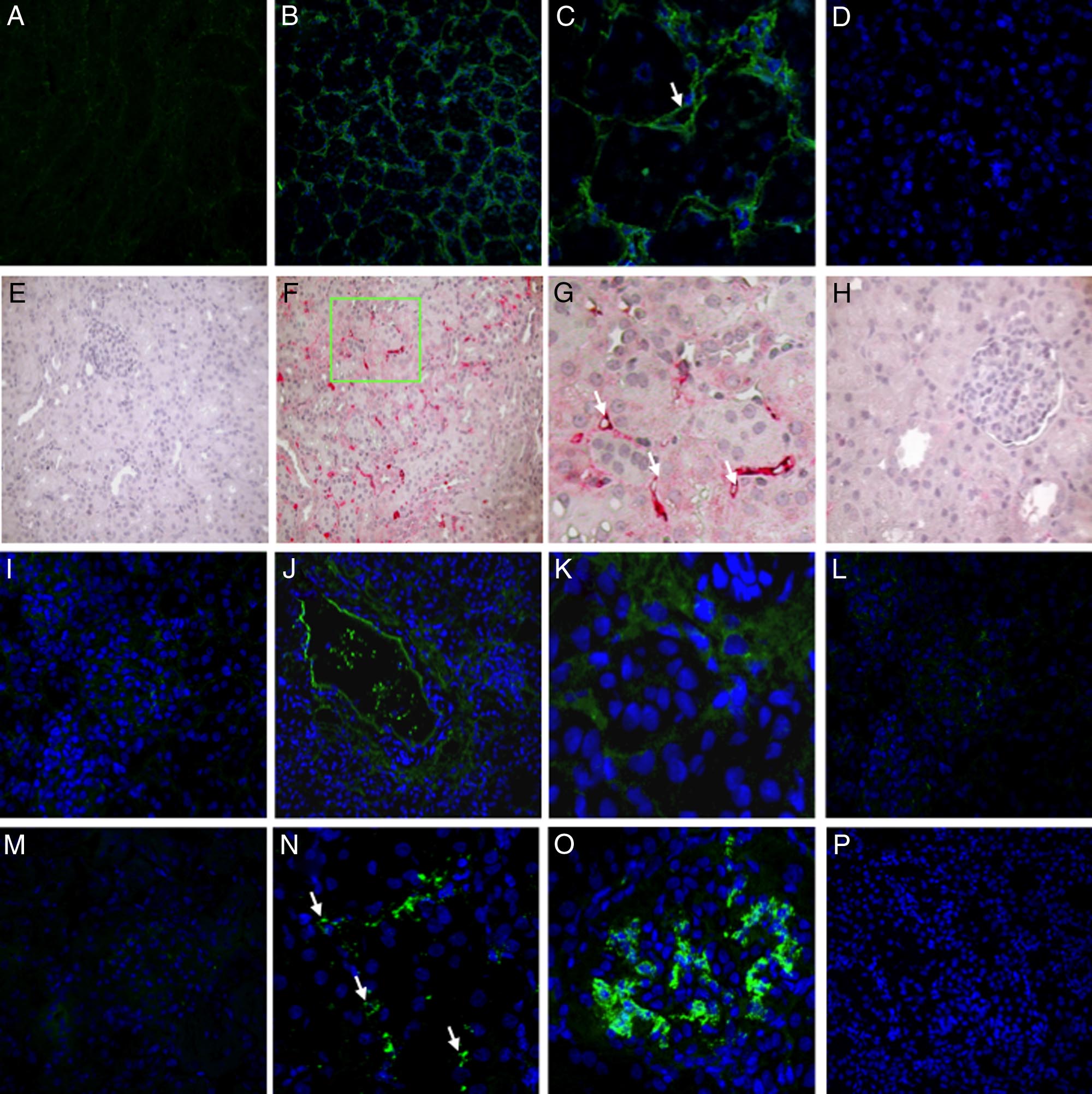 C1-Inhibitor in Renal I/R Injury AJP April 2010, Vol. 176, No. 4 Figure 1. Classical, alternative, and lectin pathway activation in a pig model of ischemia-reperfusion injury. Frozen pig kidney sections were examined for
expression of the membrane attack complex (C5b-9) by immunofluorescence and confocal analysis (A⫺D). C5b-9-deposition, completely absent before ischemia
(A), was significantly up-regulated 30 minutes after reperfusion (B), in particular at the peritubular and capillary level (C, arrow) and disappeared 24 hours after
reperfusion (D). C4d deposition was evaluated by immunohistochemistry on paraffin-embedded kidney sections (E⫺H). Specific C4d staining was not observed
at T0 (E). Thirty min of reperfusion induced a diffuse deposition of C4d (F) with a specific localization at the peritubular capillaries (G, arrows) that disappeared
at 24 hours (H). Factor B deposition was investigated by immunofluorescence and confocal analysis (I⫺L). Factor B deposition, completely absent before ischemia
(I), was significantly up-regulated 30 minutes after reperfusion (J), particularly at the interstitial and tubular level (K), and disappeared 24 hours after reperfusion
(L). Complement C3 deposition was investigated by immunofluorescence and confocal analysis (M⫺P). Complement C3 deposition, absent before ischemia (M),
was significantly increased 30 minutes after reperfusion (N⫺O; N, peritubular capillaries indicated by arrows), and disappeared 24 hours after reperfusion (P).
In confocal microscopy images nuclei were stained with TO-PRO-3 (blue).
biopsies (Figure 1A). Thirty minutes of ischemia caused a Subsequently, we investigated the presence of C4d in diffuse deposition of C5b-9 at 30⬘ of reperfusion (Figure kidney biopsies before and after reperfusion. As shown in 1, B and C), which disappeared after 24 hours (Figure Figure 1E, before the induction of ischemia, C4d deposits 1D). The complement terminal complex was localized at were undetectable in renal biopsies, whereas after 30 the peritubular level (Figure 1B) as well as within the minutes of reperfusion, we observed a significant depo- peritubular capillaries along the endothelial cell layer sition of C4d both at tubulointerstitial (Figure 1, F and G) (Figure 1C, arrow).
and glomerular (data not shown) levels. In both cases 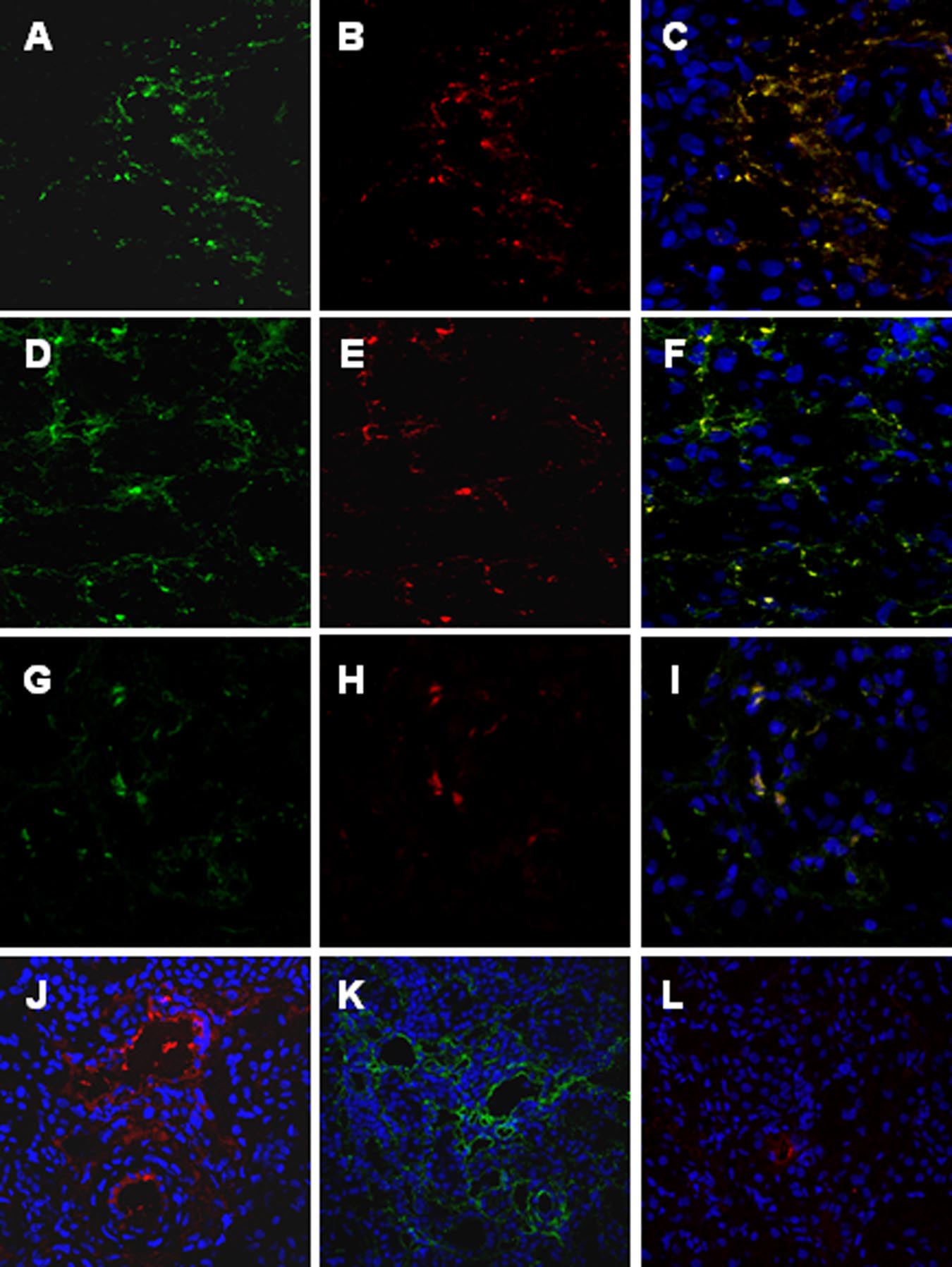 AJP April 2010, Vol. 176, No. 4 Figure 2. C4d deposition in the swine model of
ischemia-reperfusion-induced renal injury is due
to both classical and lectin pathways activation.
Co-localization of C4d with C1q (A⫺C), MBL
(D⫺F), and MBL/MASP-2 (G⫺I) was investi-
gated on frozen kidney sections by immunoflu-
orescence/confocal microscopy. A: Interstitial
and capillary deposition of C4d (green), (B) in-
terstitial deposition of C1q (red); (C) co-deposi-
tion of C1q-C4d at interstitial level (merge).
D: Interstitial and capillary deposition of C4d
(green), (E) interstitial and capillary deposition
of MBL (red); (F) co-deposition of MBL-C4d at
interstitial and capillary level (merge). The same
pattern of co-deposition was also observed for
MASP-2/MBL (G⫺I). The complement cascade
was predominantly activated by the lectin and
alternative pathways at 15 minutes of reperfu-
sion. MBL, factor B and C1q deposits were in-
vestigated by immunofluorescence/confocal mi-
croscopy. The extent of MBL (J) and factor B (K)
deposition was significantly higher than the one
observed for C1q (L). Nuclei were stained with
TO-PRO-3 (blue).
C4d deposits were localized at the endothelial cells sur- C4d deposits in our swine model of ischemia/reperfusion face (Figure 1G, arrows). As described for C5b-9, the colocalized with either C1q or MBL. We observed the deposition of C4d was markedly reduced at 24 hour co-deposition of C4d with both C1q (Figure 2, A⫺C) and (Figure 1H). Moreover, we confirmed the activation of the MBL (Figure 2, D⫺F). To further confirm the activation of alternative pathway in this setting. Indeed, factor B dep- the lectin pathway we studied also the deposition of osition, completely absent in the kidney before ischemia MASP-2. As shown in Figure 2, G⫺I, MASP-2 colocalized (Figure 1I), was significantly increased after 30 minutes of reperfusion (Figure 1, J and K). Factor B was mainly To clarify which of the three complement pathways present at the interstitial and tubular level (Figure 1J), as was primarily activated in our experimental model, we previously described. The alternative pathway was also investigated C1q, MBL, and factor B deposition 15 min- transiently activated in this model of renal ischemia- utes after reperfusion. The extent and diffusion of MBL reperfusion injury, since factor B deposits were virtually (Figure 2J) and factor B (Figure 2K) deposits were sig- absent after 24 hours of reperfusion (Figure 1L). Finally, nificantly more pronounced then C1q deposition (Figure the C3c deposits appeared with the same time and spa- 2L), suggesting a predominant role of the lectin and tial pattern of the previously described complement fac- alternative pathways in this setting.
tors (Figure 1, M⫺P). C3c was localized on peritubularcapillaries (Figure 1N, arrows), and on glomerular endo- rhC1INH Treatment and C4d Deposition thelial cells (Figure 1O).
Since C4 deposition could be due to either classical or On the basis of our data in the swine model of ischemia- lectin pathway activation, we then investigated whether reperfusion⫺induced renal injury, we hypothesized that 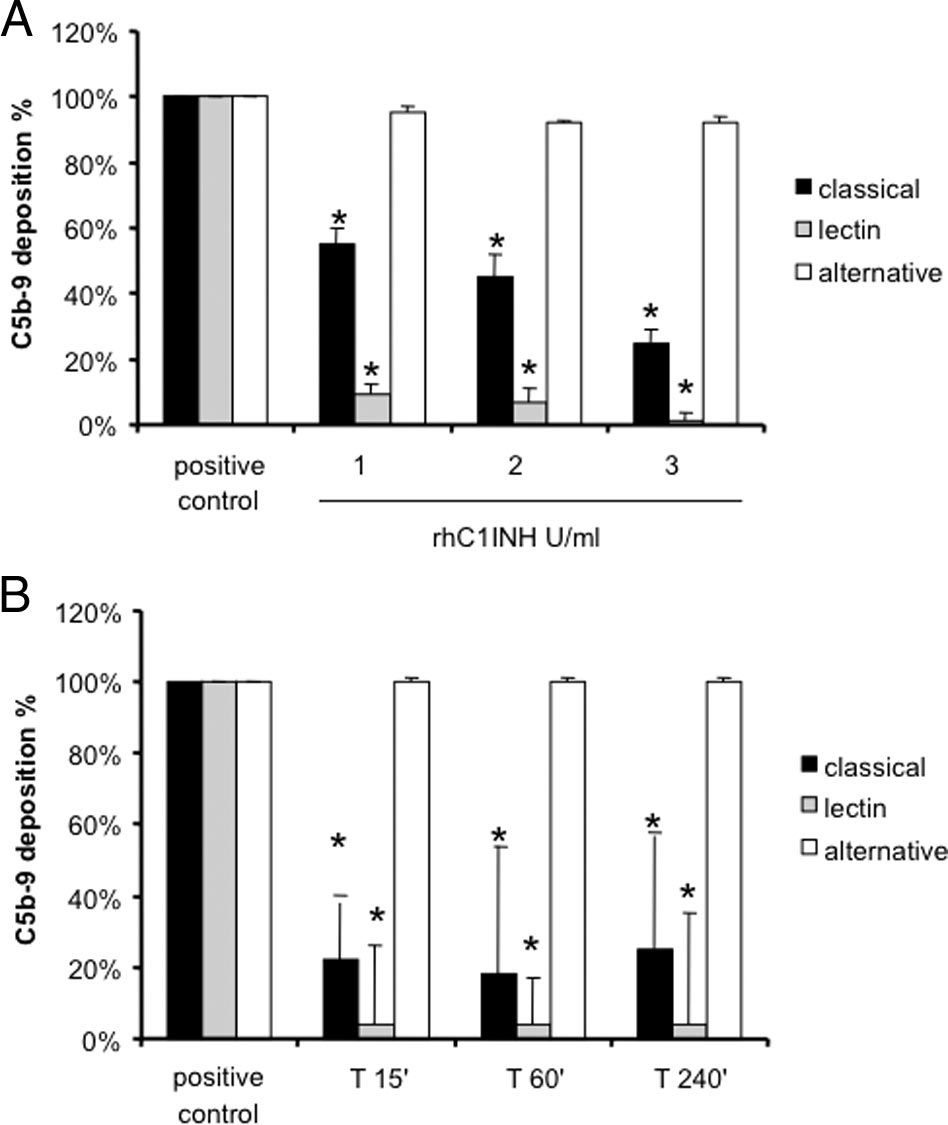 C1-Inhibitor in Renal I/R Injury AJP April 2010, Vol. 176, No. 4 rhC1INH Treatment and Infiltrating InflammatoryCells Next, we investigated the ability of rhC1INH to reduce therecruitment of infiltrating inflammatory cells, one of thehallmarks of ischemia-reperfusion injury, by inhibitingcomplement activation. Control pigs showed significantrecruitment of infiltrating CD163⫹ monocyte/macro-phages (Figure 6, A and B), whereas rhC1INH-treatedpigs showed a significant decrease of CD163⫹ cellsthroughout the observation period (Figure 6, C and D). Inaddition, we investigated the presence of dendritic cellsusing a specific polyclonal antibody against SWC3a⫹.
As previously reported,16 infiltrating dendritic cells weresignificantly increased after reperfusion in the vehicle-treated animals (Figure 6, E and F). Interestingly,rhC1INH-treated pigs showed a significant reduction ininfiltrating SWC3a⫹ cells throughout the observationperiod (Figure 6, G and H).
Finally, we investigated whether the recruitment of T lymphocytes might also be influenced by rhC1INHtherapy. As shown in Figure 7A, rare CD4⫹ T cells werepresent within the tubulointerstitial area before the in-duction of ischemia-reperfusion. After 24 hours of Figure 3. Assessment of functional activity of classical, alternative, and lectin
reperfusion (Figure 7B), there was a major influx of pathways in pig sera. A: Increasing concentrations of rhC1INH were incu-
these cells. The recruitment of CD4⫹ T cells during the bated with sera from healthy pigs to evaluate the capacity to inhibit theclassical and lectin pathways (Wielisa, Wieslab). *P ⬍ 0.05 versus positive 24 hours was greatly reduced in rhC1INHtreated ani- control (pig sera with vehicle). B: Three healthy pigs received 500 U/kg of
mals (Figure 7, C and D).
rhC1INH; then, serum samples were collected at different time points andevaluated for complement activation by Wielisa. *P ⬍ 0.05 versus positive CD8⫹ T lymphocytes were also absent in the normal kidney (Figure 7E) and we observed a significant tubu-lointerstitial influx of these cells, most notable 24 hoursafter reperfusion, in the vehicle-treated animals (Figure rhC1INH, a specific inhibitor of both classical and lectin 7F). In rhC1INH-treated animals this increase was not pathways, might reduce the activation of the complement observed (Figure 7, G and H).
cascade in this setting. We first tested in vitro the ability ofrhC1INH to inhibit the classical and lectin pathways in pigsera. Increasing concentrations of rhC1INH were able toreduce more than 50% of C5b-9 generation due to the rhC1INH Treatment and Tubular Damage activation of the classical pathway in vitro (Figure 3A).
Interestingly, inhibition of the lectin pathway reached Together with the recruitment of infiltrating inflamma- 100% at the concentration of 3 U/ml (Figure 3A). In ad- tory cells, the other main feature of ischemia-reperfu- dition, we tested ex vivo the ability of the rhC1INH to sion injury is tubular epithelial cell damage. On routine modulate the lectin and classical pathway of complement histological evaluation, untreated animals developed activation. We infused 500 U/kg i.v. in three animals and tubular vacuolization, loss of brush border, and lumen collected serum samples at different time points. The dilatation after 60 minutes of reperfusion that increased drug was able to significantly reduce both lectin and in severity up to 24 hours postreperfusion (Figure 8, classical pathway activation up to 240 minutes after infu- A⫺C). These changes were markedly reduced in sion (Figure 3B).
rhC1INH-treated animals (Figure 8, D⫺F). We then ex- We then moved to the experimental model and ob- amined tubular cell apoptosis using caspase-3 expres- served that the animals receiving rhC1INH i.v. 5 minutes sion as a specific marker. Caspase-3⫹ cells, rarely before reperfusion presented a clear reduction in C4d present within tubular sections at baseline (Figure 8G), deposition at the tubulointerstitial and glomerular (Figure4, A⫺C) levels compared with control animals (Figure 4, were dramatically increased 60 minutes and 24 hours D⫺F). Quantification of C4d deposit at tubulointerstitial after reperfusion (Figure 8, H and I, respectively).
and glomerular levels demonstrated a significant differ- Interestingly, this phenomenon was completely abol- ence between treated and untreated animals at multiple ished in rhC1INH-treated animals (Figure 8, J, K, postreperfusion time points (Figure 4, G and H, respec- and L). Quantification of caspase-3⫹ cells demon- tively). In addition, we also observed a marked reduction strated that the difference between the two groups in the deposition of C5b-9 (Figure 5, A⫺C) and MASP2 was significant at all of the time points evaluated (Fig- (Figure 5, D⫺F) in rhC1INH-treated animals. 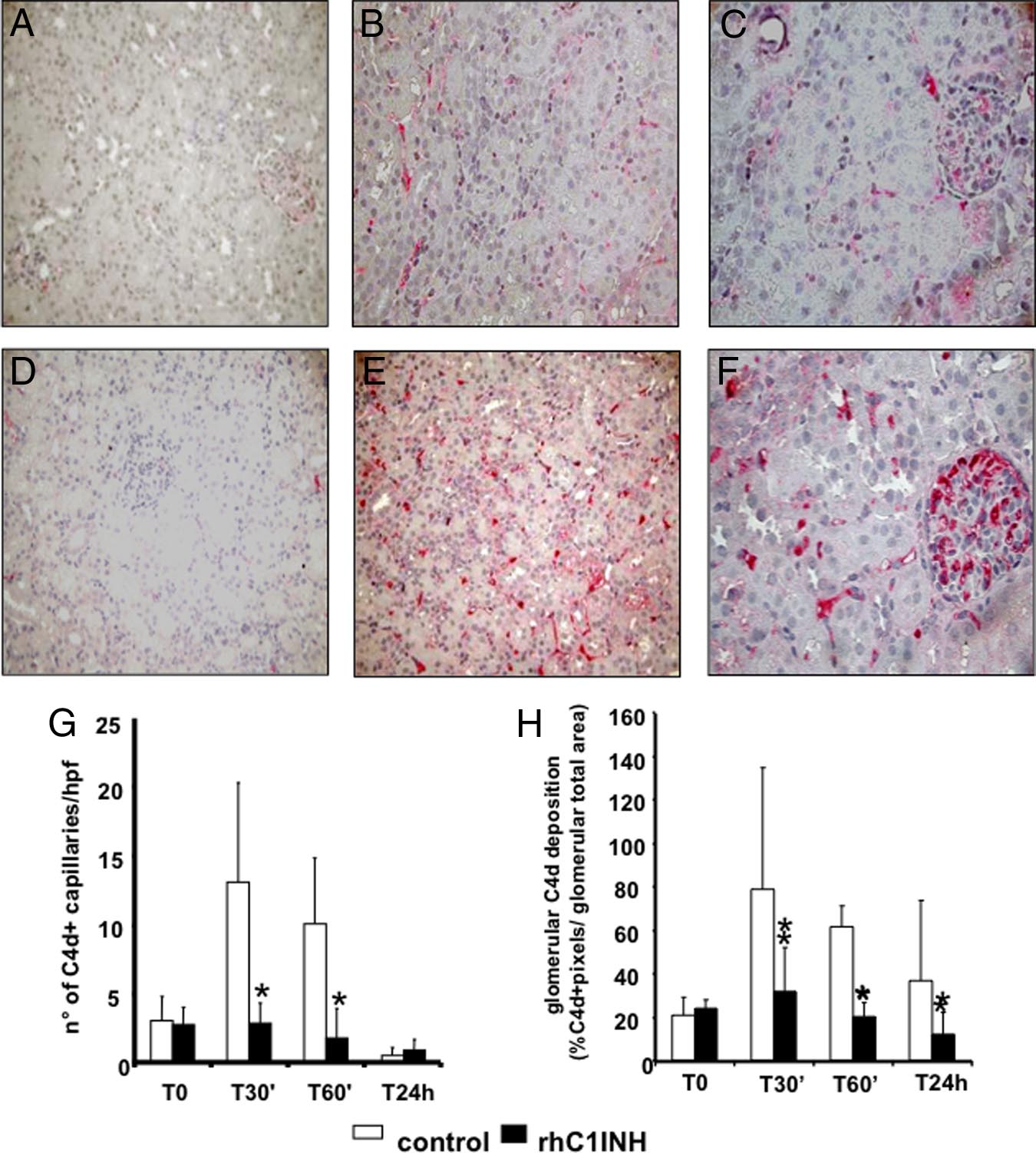 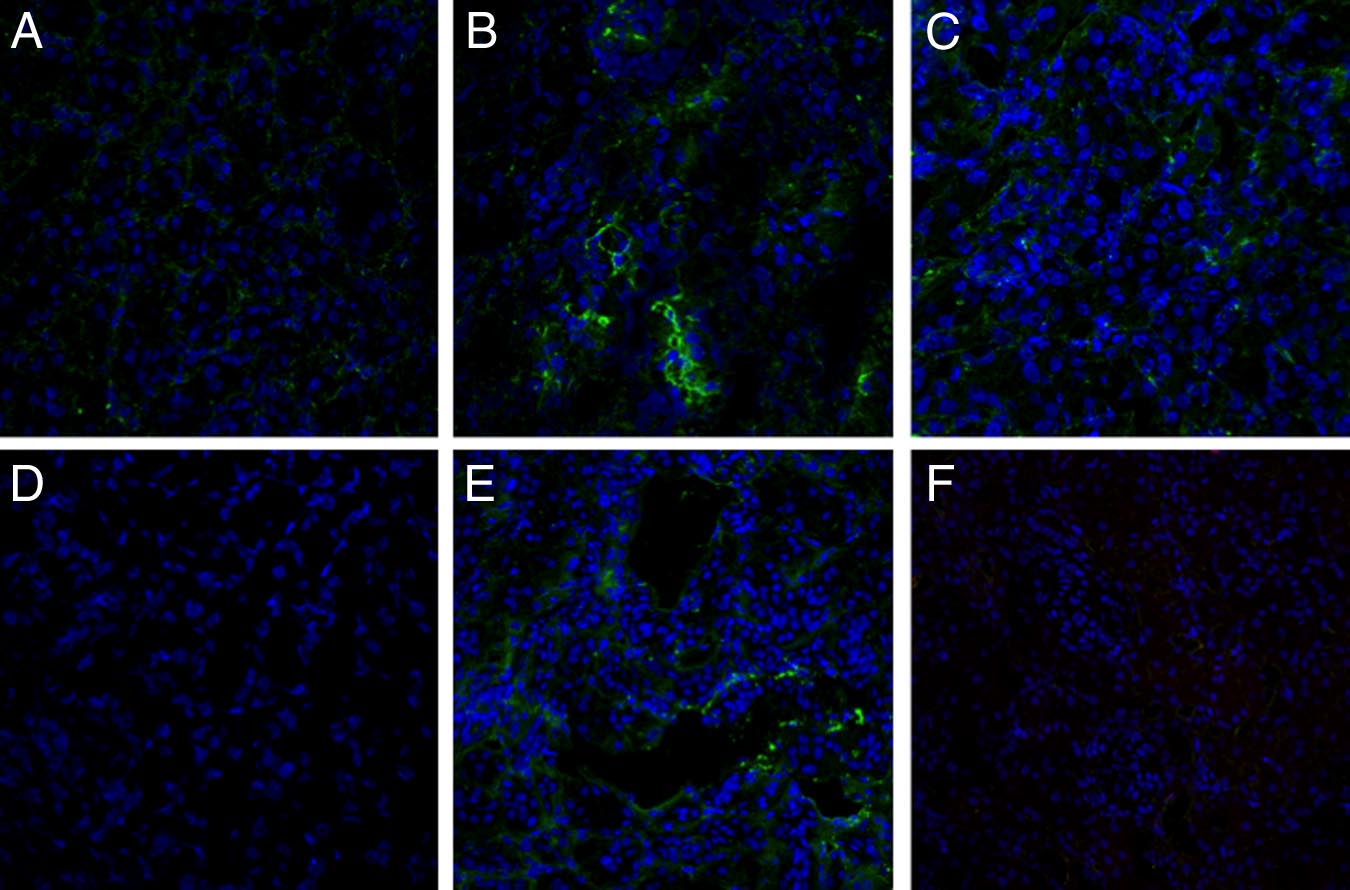 AJP April 2010, Vol. 176, No. 4 Figure 4. Inhibition of C4d deposition by
rhC1INH treatment in a swine model of isch-
emia-reperfusion-induced renal injury. C4d de-
posits were evaluated by immunohistochemistry
on paraffin-embedded kidney sections from an-
imals treated either with rhC1INH (500 UI/kg,
A⫺C) or vehicle (D⫺F). The C4d deposits, ab-
sent before ischemia induction (A, D), remained
significantly lower in the treated group both at
the tubulointerstitial (B) and glomerular (C)
level compared with untreated animals (tubulo-
interstitial: E; glomerular: F) Original magnifica-
tion ⫻400x. G: Quantification of peritubular
capillary C4d⫹ at the different times of reperfu-
sion in treated (n ⫽ 5) and control animals (n ⫽
5). Results are expressed as the mean ⫾ SD of
C4d⫹ capillary/high power field (hpf). *P ⬍ 0.05
versus time-matched vehicle-treated animals.
H: Quantification of glomeruli C4d⫹. Results
are expressed as the mean ⫾ SD of glomeruli
C4d⫹. *P ⬍ 0.05 vs. time-matched vehicle-treated
animals.
Analysis of Complement Activation in Patients tion of the complement system. Forty percentage of DGF patients showed focal C4d deposits in peritubular capil-lary, 34% showed deposition at the tubulointerstitial level, Biopsy specimens from 41 transplant recipients with DGF and 41% showed deposition at the glomerular capillary were analyzed to detect fragments derived from activa- level. Interestingly, none of the patients with C4d deposits Figure 5. Inhibition of C5b-9 (A⫺C) and MASP-2
(D⫺F) deposition by rhC1INH treatment in a
swine model of ischemia-reperfusion⫺induced re-
nal injury. C5b-9 and MASP-2 deposits were inves-
tigated by confocal microscopy. Both were absent
before ischemia (A and D, respectively) and were
up-regulated 30 minutes after reperfusion (B and
E, respectively) in vehicle-treated animals. C1INH
infusion caused a marked reduction in the depo-
sition of both, C5b-9 (C) and MASP-2 (F). 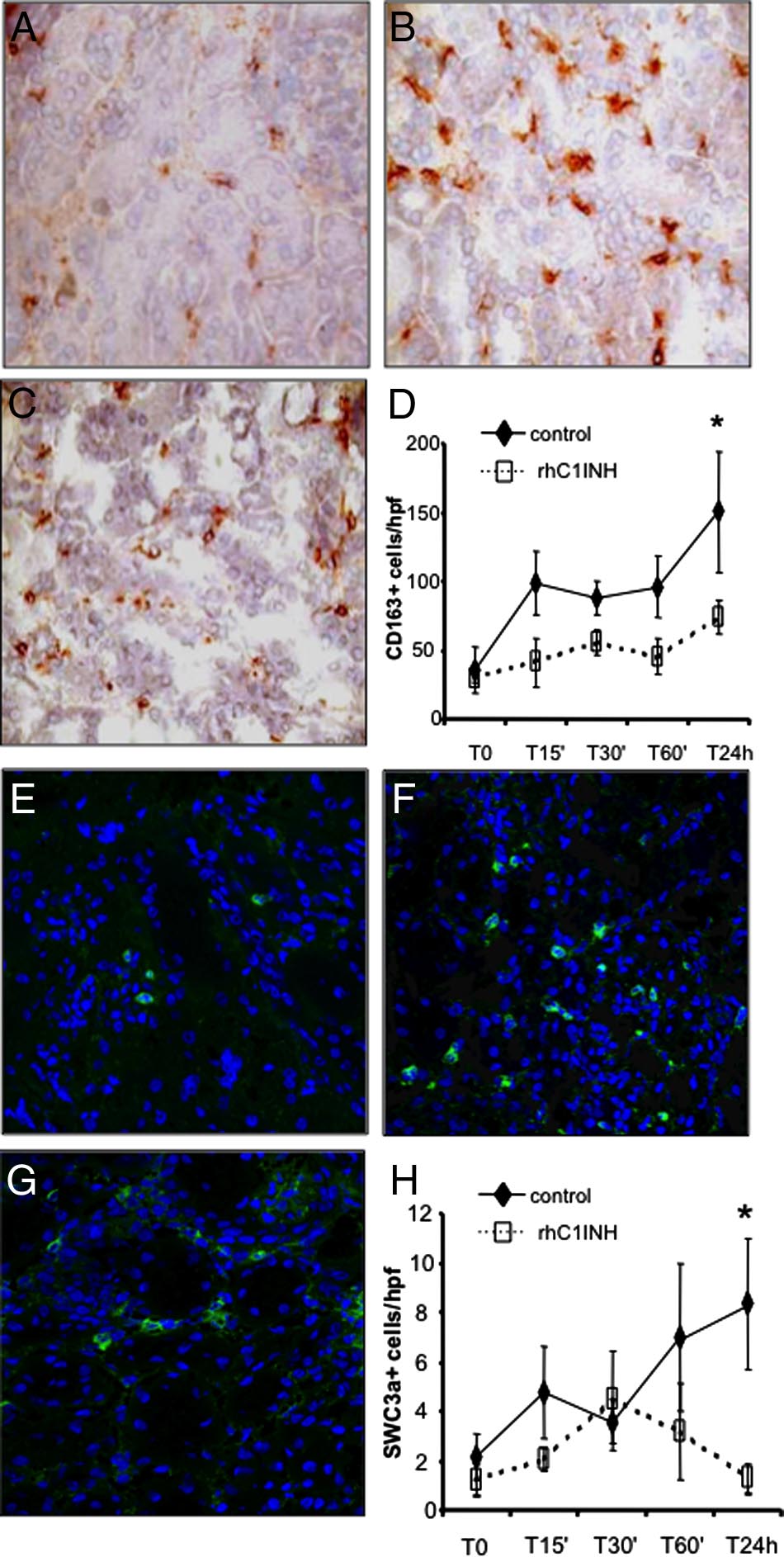 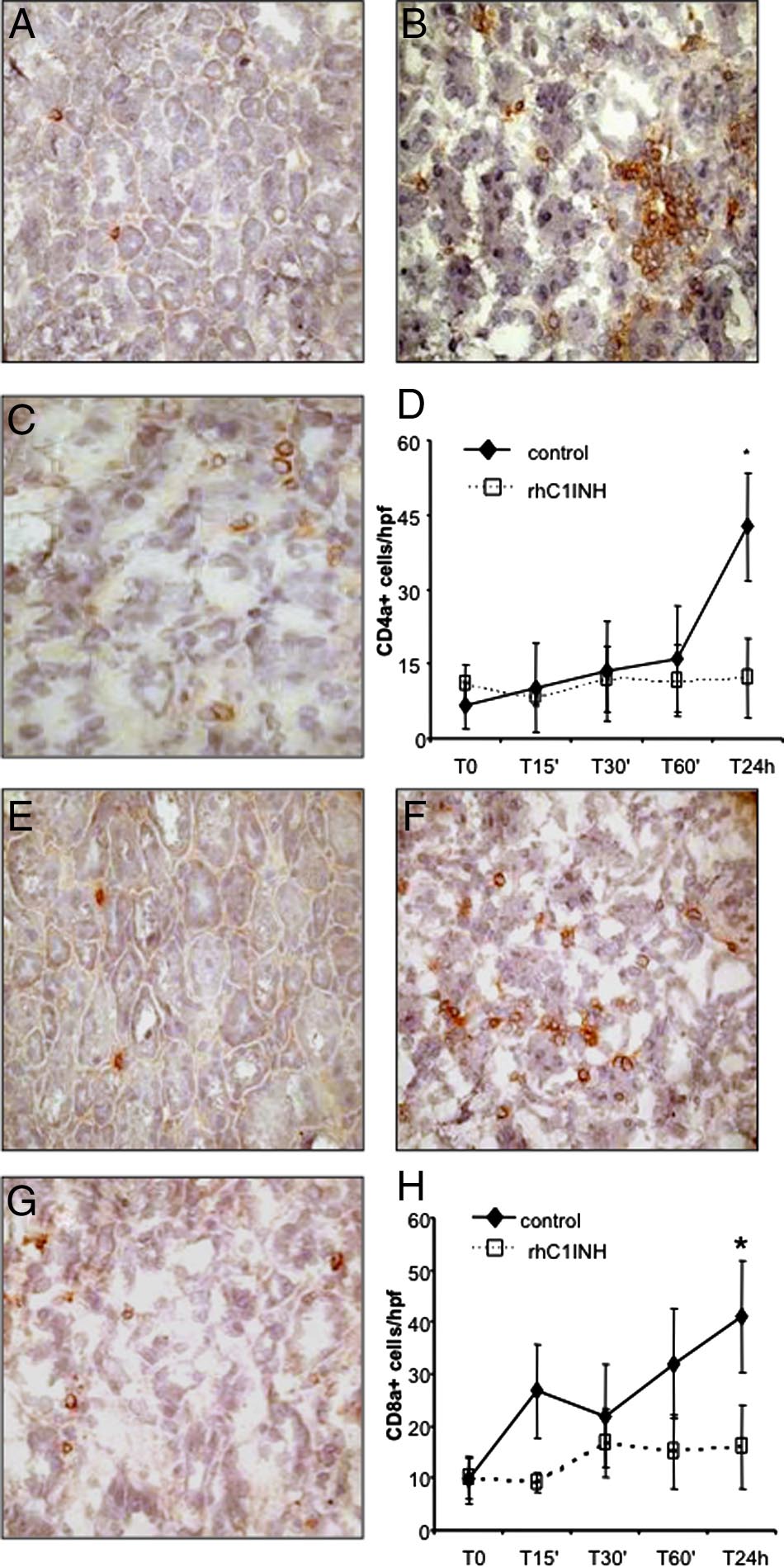 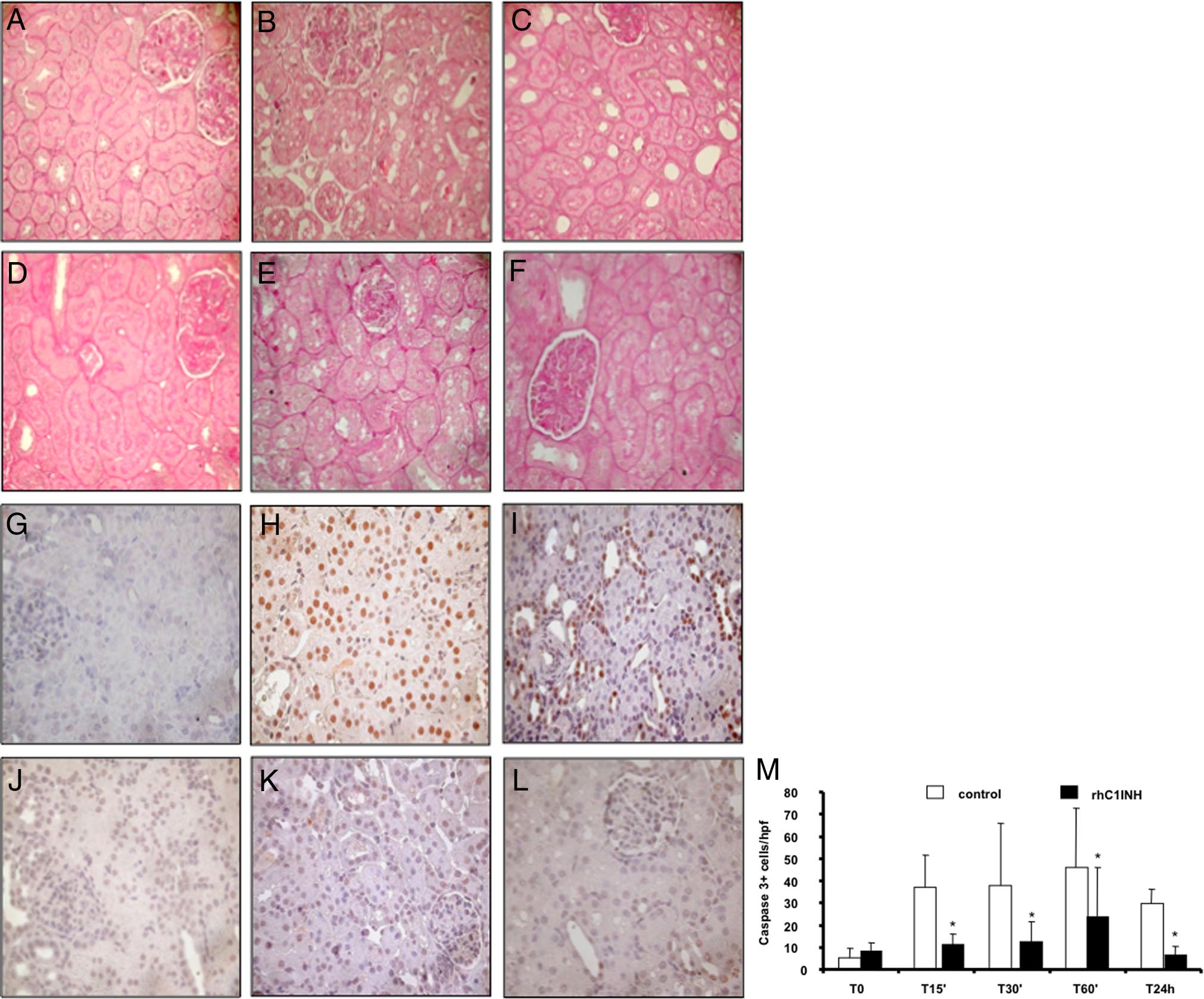 Social network wants to sequence your gut : Nature News Published online 8 September 2011 Nature doi:10.1038/news.2011.523 Social network wants to sequence your gut MyMicrobes project will gather DNA data from online community. Nicola Jones The non-proﬁt programme MyMicrobes, launchedtoday, is inviting people to have their gut bacteriasequenced for about €1,500 (US$2,100). Acting asboth social network and DNA database, the websiteoﬀers a place for people to share diet tips, storiesand gastrointestinal woes with one another. Inexchange, researchers hope to gather a wealth ofdata about the bacteria living in people's guts.

Gdp and integrity of the supply chain

GDP and Integrity of The Supply Chain Presented by: Karen S Ginsbury B.Pharm, MSc, MRPharmS IFF, October 2010 What are the Risks What are the Risks in GDP? • For a formal assessment need to use one of the tools in ICH Q9 / Annex 20: – HACCP– FMEA– Ishikawa (Fishbone) diagram + one of the • Will take you to a lot of the points already Every Picture Tells a Story