Aesth Plast Surg (2012) 36:458–463 Control of Postoperative Pain with a Wearable ContinuouslyOperating Pulsed Radiofrequency Energy Device:A Preliminary Study Ian M. Rawe • Adam Lowenstein • C. Raul Barcelo •David G. Genecov Received: 18 May 2011 / Accepted: 29 September 2011 / Published online: 25 October 2011Ó Springer Science+Business Media, LLC and International Society of Aesthetic Plastic Surgery 2011 Postoperative pain is significantly lower with Pulsed radiofrequency energy (PRFE) has PRFE therapy. According to the findings, PRFE therapy in long been reported to have a therapeutic effect on this form is an excellent, safe, drug-free method of post- postoperative pain. In this study, a portable, wearable, low- operative pain control.
energy-emitting PRFE therapy device was used to deter-mine the control of postoperative pain after breast aug- Pain  Postoperative  Pulsed radiofrequency The study enrolled 18 healthy women who underwent breast augmentation purely for aesthetic consid- Postoperative pain after surgery is a major priority for both erations. Postoperative pain after surgery was assessed with a patients and doctors. Pain affects blood pressure, heart rate, 0- to 10-point visual analog scale (VAS). Baseline pain scores appetite, and general mood. Despite advances in our were taken at completion of the operation, and the patients understanding concerning the neurobiology of nociception, were randomly assigned coded PRFE devices that were either the development of new analgesics, and the refining of active or placebo devices. For 7 days, VAS scores were minimally invasive surgical techniques, postoperative pain recorded twice daily (a.m. and p.m.). Medication use also was continues to be undertreated []. A 2003 survey of pain logged for 7 days. The PRFE devices were left in place and in management in the United States shows that there still is a continuous operation for the 7 days of the study.
need to enhance postoperative pain management All the patients tolerated the PRFE therapy well, Improvement of effective analgesia in the early post- and no side effects were reported. The VAS scores for the operative period may lead to clinically important benefits active group were significantly lower on postoperative day in terms of long-term recovery, including a decreased 1. By day 7, the baseline VAS remaining in the active incidence of chronic postsurgical pain Chronic pain group was 7.9% versus 38% in the placebo group. Together after breast cancer surgical treatment, for example, is a with lower VAS scores, narcotic pain medication use was major clinical problem, affecting 25–60% of patients lower in the patient group that received PRFE therapy.
An added benefit of improved analgesia is enhancedrecovery, with shortened hospital stays and convalescence An underused postoperative pain management method is BioElectronics Corporation, 4539 Metropolitan Court, pulsed radiofrequency energy (PRFE) therapy, also known Frederick, MD 21704, USA as pulsed electromagnetic field therapy (PEMF), pulsed short-wave therapy (PSWT), and RF nonthermal dia- thermy. In 1947, the Federal Communications Commission Montecito Center for Aesthetic Plastic Surgery, (FCC) assigned three frequencies at the short end of the RF Santa Barbara, CA, USA band (40.68, 13.56, and 27.12 MHz) [] for medical use.
The frequency of 27.12 MHz is the most widely used in C. R. Barcelo  D. G. GenecovGenecov Plastic Surgery Group, Dallas, TX, USA clinical practice. 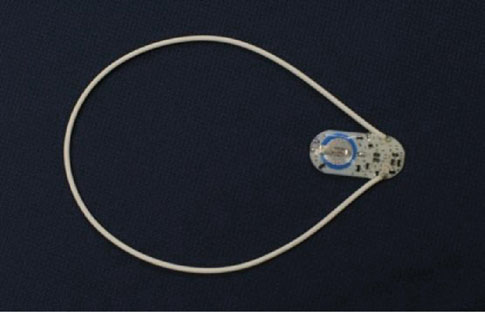 Aesth Plast Surg (2012) 36:458–463 The first PRFE device, the Diapulse (Diapulse Corpo- ration, Great Neck, NY, USA), was commercially availablein the 1950s. It was followed by other commerciallyavailable machines. As a treatment for nonhealing bonefractures in humans, the use of PEMF is well established[] and has been in use since the 1970s. Clinical studieshave demonstrated its safety and efficacy as a treatment forpain, edema, and soft tissue injury.
Some of the first studies investigating postoperative edema and edema caused by soft tissue injury showedpromising results Studies on postoperative painalso showed good results []. Reduction of capsularcontraction in 41 patients after breast augmentation surgerywas achieved with PRFE therapy together with massage Fig. 1 Latest version of a pulsed radiofrequency energy (PRFE) and closed capsulotomy treatment ]. Pain and edema device. The therapeutic field lies within the 12-cm antenna. Thecontrol module containing the battery is small (4.2 9 2.0 cm, with also have been treated with PRFE therapy in a number of a depth of 0.3 cm) and streamlined, allowing for comfortable orthopedic conditions Findings also have demonstrated PRFE therapy to be effective for chronic wounds, including diabetic and USA). The small size allows them to be potentially applied to venous stasis ulcers. A number of early studies showed most areas of the body. They are inexpensive to produce and good results [with improved healing of pressure ulcers easy for both the physician and the patient to use.
with PRFE treatment [ A prospective, randomized, double-blind, placebo-con- trolled multicenter study assessed the clinical efficacy and Materials and Methods safety of pulsed electromagnetic therapy delivered by aportable device. The device was used at home for the healing of recalcitrant, predominantly venous leg ulcers.
Significant decreases in wound depth and pain intensity The ethics review board of North Texas Independent Review favoring the active group were observed [ Board at Medical City, Dallas, Texas approved this study.
Important recent studies on the use of PRFE for the All the patients enrolled in the study signed a consent form.
treatment of chronic wounds may bring a new focus to itsapplication in this field –including a retrospective study on the Regenesis Biomedical Wound-Healing Reg-istry ] (Regenesis Biomedical, Scottsdale, AZ, USA).
The device used in this study was a PRFE device (Recov- Two studies on postoperative pain using a wearable eryRx, BioElectronics Corp) that emits a safe form of non- form of PRFE from Ivivi Technologies (SofPulseTM; Ivivi ionizing electromagnetic radiation. The carrier frequency of Technologies, Northvale, NJ, USA) have been reported. In this device is 27.12 MHz, the assigned FCC medical fre- the first study, a double-blind, placebo-controlled, ran- quency. It has a pulse rate of 1,000 pulses per second and a domized clinical trial on breast augmentation showed a 100-ls burst width. The peak burst output power of the significant decrease in postoperative pain ]. The second 12-cm antenna is approximately 0.0098 W covering a sur- study, using the same form of wearable PRFE device after face area of approximate 100 cm2. The circuitry consists of breast reduction surgery, also showed significant control of low-voltage (3 V) digital/analog electronics that control all postoperative pain ]. In this study, a decrease in inter- timing functions to produce the therapeutic RF field with the leukin 1-b was reported, suggesting a modulation of the antenna field placed directly above the therapeutic site.
A potential mechanism of action for PRFE therapy has been put forward and is reviewed by Strauch et al. Moreover, recent reports have further contributed tounderstanding concerning the mechanisms of PRFE ther- The study was a double-blind, placebo-controlled ran- apy for wound healing [].
domized study to determine postoperative pain after breast Continued technological advancement has allowed PRFE augmentation. The 18 patients recruited into the study had devices to be produced that are smaller and less obtrusive, elected the surgery for purely aesthetic reasons. Silicone as shown in Fig. (BioElectronics Corp, Frederick, MD, breast implants (Allergan, Irvine, CA, USA) were used for 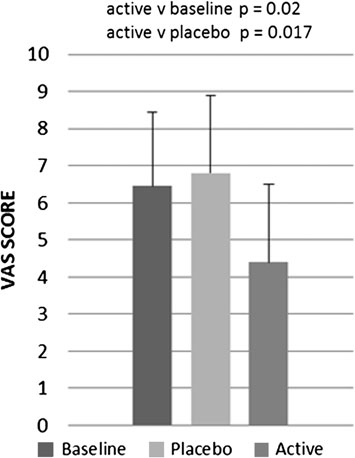 Aesth Plast Surg (2012) 36:458–463 all the patients, and each operation was performed in less Table 1 Mean daily visual analog scale (VAS) scores and standard deviations for the active group (A-VAS) and the placebo group (P- Breast augmentation was performed in submuscular VAS) during the 7 days of the study fashion via either an inframammary or periareolar approach. Randomization resulted in 10 patients receiving active devices on each breast and 8 patients receiving placebo devices on each breast. There were no patient dropouts. The demographics of the active and placebo patient groups very closely matched in terms of average age (32 vs. 31.3 years), weight (134.4 vs. 134.1 lb), and height (5.61 vs. 5.44 ft).
Once the surgery was completed, the PRFE devices were activated and secured in place with a surgical bra. The placebo devices were activated in the same way. A redindicator light showed activation of both the placebo andactive devices. The active devices were not felt by thepatient, ensuring that the patients were unable to determinethe treatment group.
At completion of the operation, a baseline score was assessed for each patient. The pain scores were assessedusing a visual analog scale (VAS) ranging from 0 (no pain)to 10 (extreme pain). The pain scores were logged in thea.m. and p.m. for the 7 days of the study. The use of VASscores to document pain is well established ]. Themedication use by each patient also was logged. Themedications used by patients were opiate-based drugs,oxycodone, hydrocodone, and propoxyphene.
Statistical Analysis Means with standard deviations are reported. The differ-ences between the active and placebo groups were deter-mined by t-tests and repeated measures analyses ofvariance (ANOVA). The F-test for the equality of vari- Fig. 2 On postoperative day 1, the active group mean visual analog ances was performed. A P value of 0.05 was considered scale (VAS) score at 4.40 is significantly lower than the mean baseline score of 6.46 (P = 0.02) and the placebo mean VAS score of6.80 (P = 0.017) the baseline score (P = 0.02, significant difference). Theplacebo group VAS score was 6.80, which was not sig- The PRFE therapy devices were well tolerated by all the nificantly lower than the baseline score (P = 0.65). The patients, and no adverse effects were noted. Data were VAS score for the active group was 2.40 points lower than obtained from all the patients and available for statistical analysis. The baseline score, obtained at completion of the operation before treatment, did not differ significantly The VAS scores in the active group were significantly between the active and placebo groups. Therefore, the lower than the placebo group on all days except day 2 baseline VAS score was determined from all the patients.
(P = 0.23), but were 1.35 VAS points (35%) lower. Fig- The VAS scores, collected twice daily (a.m. and p.m.), ure shows the comparison of the active and placebo VAS were averaged to a daily mean. The mean daily VAS scores scores with the baseline score at postoperative day 3. On and standard deviations are presented in Table .
postoperative day 3, the placebo group VAS was 5.40 The mean baseline VAS score was 6.46 on the 0- to points. The active mean VAS score (2.57) was significantly 10-point scale. As shown in Fig. , the postoperative day 1 lower than the placebo mean VAS score (5.40) on day 3 VAS score for the active group was 2.06 points lower than (P = 0.003), showing a difference of 2.83 points. The 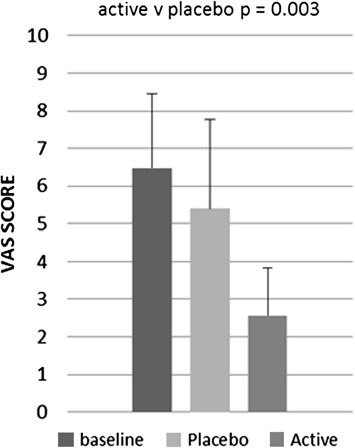 Injecting some reality into Health and Social Care Act 2012 Death is the only certainty in life, the prospects of appealing a so why has the law on assisted GMC Fitness to Practice Panel Legal issues arising from claims dying been branded "inadequate concerning negligence in relation to the diagnosis of renal failure E-disclosure: survival guide NHS strike action

CURRICULUM TO TEACH UNLICENSED SCHOOL PERSONNEL HOW TO ASSIST WITH MEDICATIONS IN THE SCHOOL SETTING SECTION ONE: INTRODUCTION Many children with chronic illnesses and conditions attend Alabama's schools and may require medication during school hours. While many schools have a licensed nurse available, there are not enough school nurses to be in each