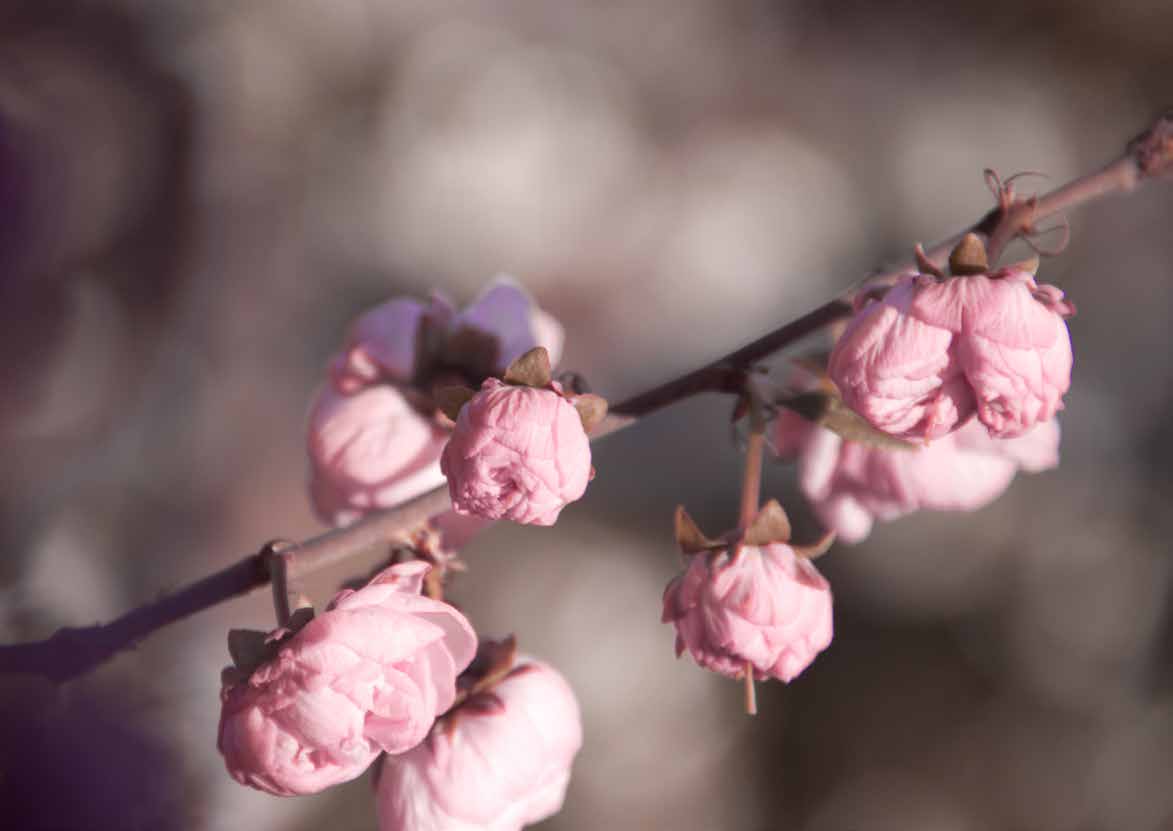 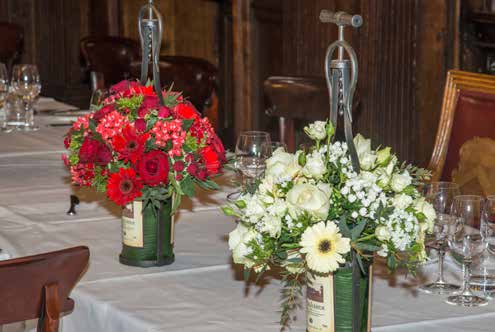 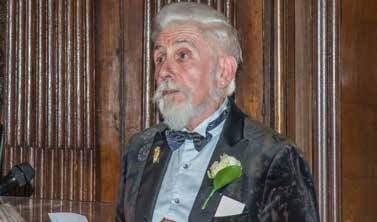 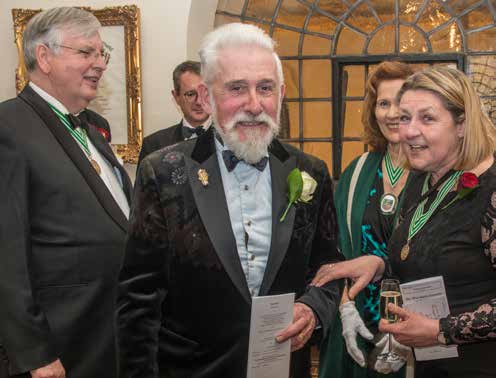 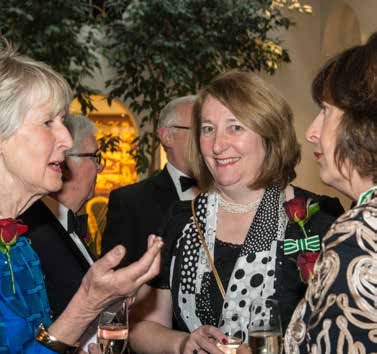 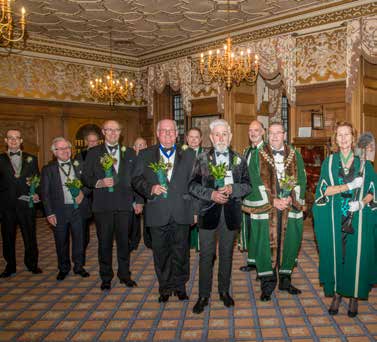 SPRING COURT DINNER AT HOGWARTS
Gardeners and their guests assembled for the Spring Court and Dinner at Vintners' Hall, the fine old façade in Upper Thames Street hemmed in by modern glass and concrete, trapped between river and the busy road. Once through the doors, we entered a cosy lobby with fire burning in the grate, Christopher Hanrahan our cloaked Beadle welcoming all inside.
I arrived with my family a little early for my admission to the Livery; despite a little nerves all went well and I was warmly welcomed by all at the Court, and what a Court! Aside from its noble members the room itself seemed – as my son observed – straight from Hogwarts. I didn't notice any of the fine paintings offering animated congratulations but the room was steeped in a history going back to The Worshipful Vintners pre-date our own venerable company by many years but we share a long and successful history. Upstairs the reception room walls attested to that history with charters signed and sealed by Elizabeth 1, Charles II, and a note from Chaucer. Mention of growing vines and gathering crops revealed links between Appropriately themed table decorations at Vintners' Hall.
the two companies. In the early evening as the guests arrived the company's fur-trimmed Assistants (L-R) Helen Knight, Cindy Peck and Kate Jones enjoy the livery gown kept the cool of the upstairs at bay until I was wrestled from it by Major David our assistant clerk. As the champagne flowed the friends warmed the halls with animated chatter until dinner was called and a dignified throng headed for the magnificent Great Hall.
Upper Warden
At dinner those links became clearer in the presence of Simon Leschallas the Master Vintner; Stephen Bellamy-James, Master Fruiterer; Michael Neal, Master Carpenter; Andrew Gill, President of the Chartered institute of Horticulture and our own Bernard Williams, all truly Masters of the green world, representing a cooperative approach to future challenges and opportunities.
This was the theme of the heartfelt after-dinner speech by our principal guest Sir Roy Strong who took us on a journey through his own career, his successes and regrets. Through his words we visited his beautiful garden at The Laskett, now gifted to Perennial, the Gardeners' charity. He took us onwards with his thoughts on garden design, training of gardeners for the future, our garden heritage and its conservation and promotion - a whirlwind tour of an iconic life.
Preserving the theme of Viticulture and Horticulture, Assistant Nicholas Woolf welcomed guests with poetic and humorous greetings. Fine wine and excellent port, as you would expect in the The Gardeners Company Vintners' Hall, flowed during the toasts and responses, and a very Sir Roy Strong is welcomed to the event.
The Master, principal guests and Court members gather before full cup was had by all as the Loving Cup wove its way amongst puzzled and knowing diners. processing into the dining hall.
DATES FOR YOUR DIARY 2016
report by ian Barrow all photographs by michael warren PLANTING FOR THE ‘WOW' FACTOR
Charity Dinner in aid of Future Gardeners, Carpenters' Hall Fairchild Court, Lecture and Supper, St. Giles, Cripplegate The popular workshop series at Capel Manor College's Enfield site Welcome to your Spring Spade. Chelsea Supper, Farmers' Club continues on the 14th May with "Enhancing Colour in the Garden': Feedback is always very helpful, as Visit to Slovenia guidance on how to increase summer colour impact.
are new ideas for articles. Most of Garden Party, Gardens of the Rose, St. Albans the items in this issue are available on Installation Court and Dinner, Clothworkers' Hall It will be a ‘hands-on' day and participants will learn how to create the Company Blog, usually at greater Olympic Park Walk vibrant and colourful borders. The use of tropical and sub-tropical length and with more photographs. Tom Stuart-Smith garden visit plants to achieve a ‘wow' factor will be explored, as will traditional annuals and plants good for infilling border gaps. Planting If you have not already done so, Visit to the Black Country containers for maximum effect will do obtain your user name and London Park visit also be covered.
password from the Office and visit the Harvest Festival Service and lunch, St Etheldreda's Church Gardeners' Company website RHS Lecture and Supper Autumn Court and Dinner, Carpenters' Hall The day costs £48, runs from 10.30am to 3.45pm and includes light Tradescant Court and Lunch lunch with wine, tea and cake. Booking forms have been circulated John gilbert, editor.
Christmas Carol Service, St Stephen Walbrook and are available for download on the Company Blog. They should dates correct at time of publication be sent to Past Master Nicholas Evans, Capel Cottage, Bullsmoor Sir Roy Strong proposes the traditional Toast to the Company.
Lane, Waltham Cross, EN7 5HR no later than 7th May. 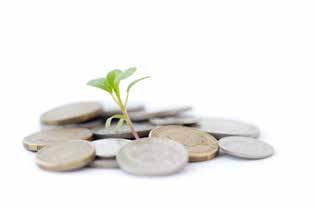 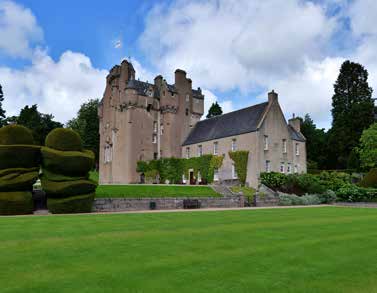