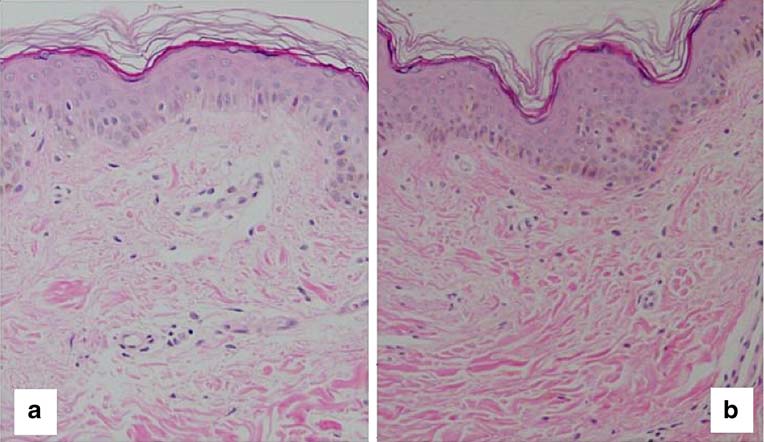 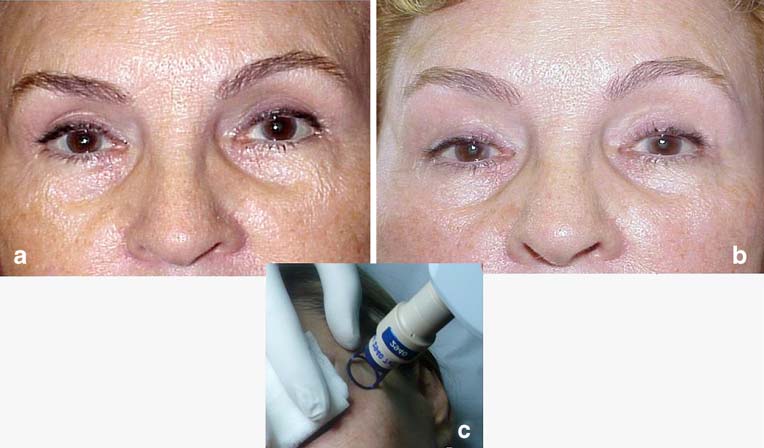 Fig. 1 Skin before (a) and 2 months after (b) a single treatment skin, with a multicellular wavy epidermis. The dermo-epidermal (1,400 mJ, eight passes). A Dense keratin on a typical photo-aged junction is well defined, with fine collagen fibres, well organized epidermis and dermis. The basal epidermal layer is not well defined, linearly, in the superficial dermis running parallel and attached to the and, in the dermis, there is lack of fibre organization and noticeable basement membrane. In general, the collagen fibres are more compact interfibrillary spaces typical of the elastosis phenomenon. (b) Two and with fewer interfibrillary spaces. Both H&E, ×4 months after, the tissue aspect is more in accordance with a younger days to heal. With only a few laser passes, improvement wound healing process brought into play by the thermal occurs in the "dull" appearance of a photo-aged epidermis damage in the dermis [].
but with little repercussion in the dermis because of the low To achieve the maximum possible effect with only one level of conducted heat deposited there. As a result, this treatment, we chose the long pulse programme in eight will not have any real effect on wrinkles. On the other hand, passes to produce better skin results regarding wrinkles.
several Er:YAG passes during fractional resurfacing, with Multiple passes, with the long pulse programme, in only the higher energy of the long pulse programme, will peel one treatment could be thought of as "more aggressive" the skin more deeply, deposit much more heat into the than has been previously reported in studies ]. Howev- dermis to give the required residual thermal damage, and er, we believe that the treatment as described not only will thus bring about beneficial morphological changes to changes the aspect of the epidermis but increases the level both the epidermis and the superficial dermis due to the of photothermal dermal irritation via heat propagation to Fig. 2 Caucasian woman, 50years old, phototype III, (a)before and (b) after full-facefractional resurfacing with Er:YAG laser (1,400 mJ, eightpasses, only one treatment);details of the periocular area areemphasized in order to show theimprovement of wrinkles andskin texture, lightening and re-juvenation of the whole aspectof the skin. c The patient duringtreatment 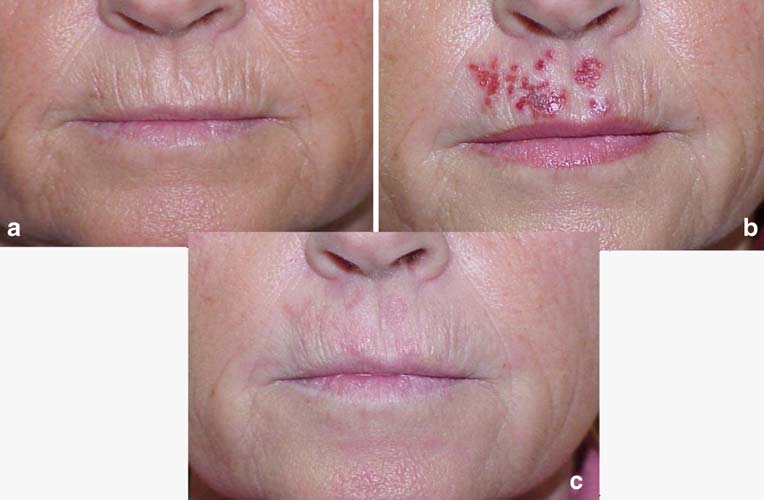