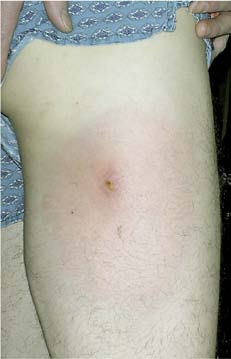 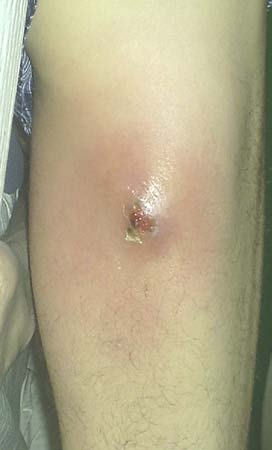 reverted to a very large "bite-like," dark dot larger but he described marked improvement in within a day. Light red discolouration of the skin the sensation of his most prevalent symptom, was seen almost down to his knee. The lump i.e. the swelling and the constricting. The was sharplypainful and causing him concern. discolouration that had spread to his knee was It was constricting his leg and felt very hard. He more localised. At this stage I repeated the felt as if an iron band was preventing movement. He was concerned because he thought it might be the same, incurable infection as the first one on his finger. Based on the sensation of constriction that 2 days later
he repeated in many different ways and the Though the infection seemed contained the other symptoms listed in italics I prescribed central area now resembled a large boil and had Cactus Grandiflora. I also stressed the grown rapidly to a darker red circle of about 4 importance of being seen by a medical doctor. inches. At this point he complained of severe James however steadfastly refused to return to "burning pains", and the infection was described (and looked) as ‘angry'. He was also extremely restless with a constant need for At this stage about five dozen remedies motion. At this point I had several remedies in were identified as being valid homeopathic mind that might have fit the symptom picture, remedies for this individual. Careful but the degree of anger and burning in the case differentiation and research would clarify final led me to Cantharis. remedy selection, according to homeopathic repertories and Materia Medicas.
24 hours later (from initial consultation)
After one day the sensation of constriction
was significantly diminished. The pain had lessened but the infection was not improving. The central area of induration was growing 7 Italicized words in this description of finding represent qualities specifical y used in selecting the proper homeopathic rememdy. 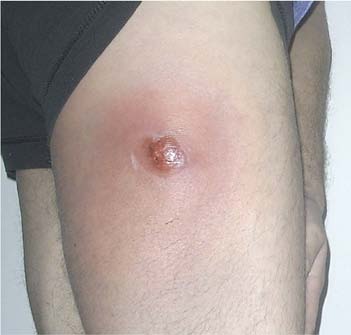 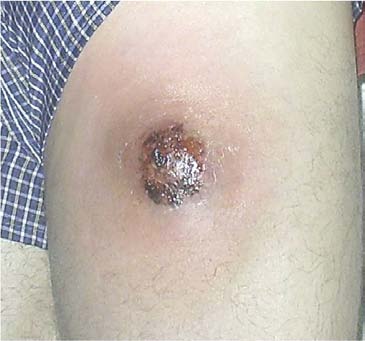 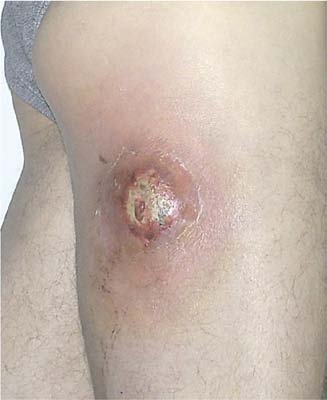 His pain was manageable and was not requiring the high doses of narcotics he had needed during his first MRSA infection. He was confident that the lesion was healing and could not afford the high cost of another hospitalisation so he was not willing to seek medical attention. During this time James did stay in his apartment to avoid any possibility of secondary infection. 4 days later
24 hours after the Crotalus the boil began 3 days later
changing colour. Yel ow and light green pus James reported that the Cantharis had could be seen in the border. His pain was addressed the burning pains which now felt manageable and he had no fever. much better. He was happy that he did not have to take pain medication as he had with the At this point James described intense first infection. The outward progression of the anxiety over the possibility of MRSA occurring infection had clearly stopped and the boil over and over and over again in his life. He felt turned even darker red with a congested, shiny he was poisoned for life. The increased anxiety appearance and blood seeping through the along with the idea that his body was poisoned pores in the centre of the mass. According to and that he had an incurable disease indicated these symptoms, Crotalus Horridus was given, the remedy Arsenicum Album. as it is often used for dark, haemorrhagic wounds. I had previously researched this remedy in regards to Ebola type infections several years ago.
6 days later

Clearly the infection was no longer spreading. James' anxiety was much All along James was repeatedly advised to diminished. The boil was fil ed with pus and seek medical care and have the wound lanced. began oozing but there was no way to know There was concerned about a systemic blood what was going on underneath the mass of pus infection. James pointed out that he had no and necrotic tissue. He felt very good about his fever at all and that the swelling had stopped. 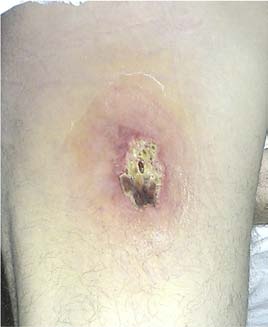 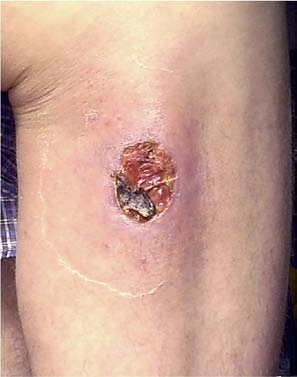 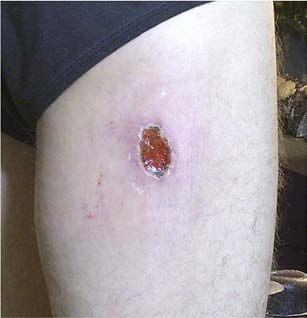 progress but I remained concerned about the lesion had healed over completely. James systemic infection and necrosis at the infection continued to take Arsenicum several times a site. Secale was given as a prophylactic for day as he still had some level of anxiety blood poisoning. Within half a day his anxieties regarding re-infection. We were gradually able and restlessness came back. It was clear this to reduce the frequency of repetition as the remedy was not having an effect and I reverted wound continued to heal and his anxiety
Continuing Progress
On the 7th day the mass opened and began
oozing. At this point James was able to manual y squeeze the lesion and exude a large amount of dark green, almost black pus. At this stage James collected several of the cotton balls he had used to drain the exudate and on the 6th December 2007 he had them analysed at the same laboratory facility as his earlier sample. The exudate was confirmed as positive for MRSA. Later on the wound stopped seeping and 5 months later
began to dry up. I continued to prescribe James continues to do wel and on the 9th of Arsenicum daily and James remained vigilant April 2008 he returned to Columbia for another about cleaning the wound with hydrogen nasal swab analysis. Remarkably the tests peroxide. I was encouraged that at the time the came back negative for MRSA, meaning that not lesion burst there was already evidence of only was his local infection cured but his body granulation on the borders. This was evidence was no longer colonised by the bacteria. In to me that the infection had been ful y isolated. other words, his wound was completely healed and he is no longer a carrier of MRSA in the Over the next two weeks the wound general population. continued to slowly heal from the outside edges towards the centre and from the bottom of the ulcer to the surface of the skin. Within 3 weeks
Conclusion
Given the growing number of antibiotic
resistant infectious agents, a treatment for MRSA that avoids all use of antibiotics has enormous potential in the general population. Furthermore, the treatment above is reproducible in a hospital setting using the basic five dozen remedies that fit the MRSA symptom picture. There is also the possibility of using other homeopathic remedies prophylacticaly. To that end we recommend and hope to undertake further research on this approach in a traditional medical facility.