medotceurope.com™ New Year 2010 The News Letter of James Dudley Management Mail Order Sales Up -
Wishing You a
but Celesio's Retail
Pharmacies under
Prosperous
Cloud in Ireland, Italy
and the Netherlands?
Celesio‘s mail-order turnover from on-line activities in
Germany, Netherlands, Norway and UK rose significantly
in the first nine months of 2009 by 14.9 per cent to
€186.6 million. This is equivalent to the total turnover of
more than 160 of the company's retail pharmacies.
According to the Company strengthening its mail-order operations isimportant in building Celesio's Patient and Consumer Solutions division in the future. Celesio currently operates the Dutch-based DocMorris mail-order pharmacy, which serves customers in Germany and the Netherlands, as well as the mail-order operations of its Lloydspharmacy chain in the UK and Vitusapotek chain in Norway.
In Germany, a television campaign led to a strong boost in mail order demand with orders peaking at some 10,000 per day for the mail-order pharmacy DocMorris. According to Service Barometer DocMorris is the leading mail order company in Germany in 2009 with 15% share.
On a darker note Celesio is examining the future of its pharmacy operations in Ireland, Italy and the Netherlands, according to chief executive officer Fritz Oesterle. Addressing a press conference in Germany in December, Oesterle said the Europe-wide pharmaceutical retailer and distributor was "evaluating whether to continue its pharmacy operations" in the three countries. The company had already announced on 8 October 2009, that valuations were adjusted by €274 million in the course of the annual review of goodwill for its retail activities. The adjustments referred to the retail pharmacies in the Netherlands, Ireland and Italy as well as for DocMorris' brand partner business. The mail-order pharmacy business remained unaffected. OTC Distribution in Europe the 2010
Back in October the Company described the Dutch preference policy as Driving the Recovery
generics tendering in all but name and that it was this that was responsible for the reduced income streams of pharmacies in Holland. James W. Dudley is now available for details and table of Meanwhile reduced medicine prices and a cut in pharmacists' remuneration had had the same effect in Ireland. Government measures in Italy were also blamed for the "additional and unpredictable decline in pharmacy margins". 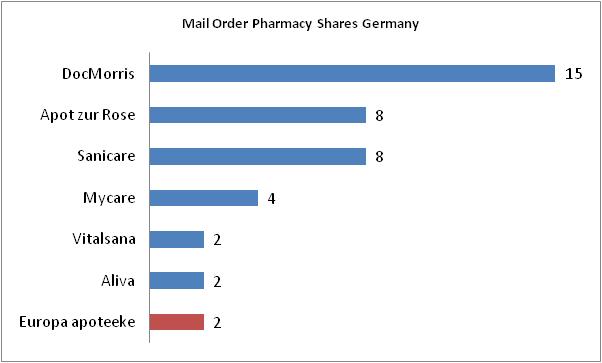 Nascimento et al. BMC Bioinformatics (2016) 17:46 DOI 10.1186/s12859-016-0890-3 Open Access A multiple kernel learning algorithm fordrug-target interaction predictionAndré C. A. Nascimento1,2,3*, Ricardo B. C. Prudêncio1 and Ivan G. Costa1,3,4 Background: Drug-target networks are receiving a lot of attention in late years, given its relevance forpharmaceutical innovation and drug lead discovery. Different in silico approaches have been proposed for theidentification of new drug-target interactions, many of which are based on kernel methods. Despite technicaladvances in the latest years, these methods are not able to cope with large drug-target interaction spaces and tointegrate multiple sources of biological information.