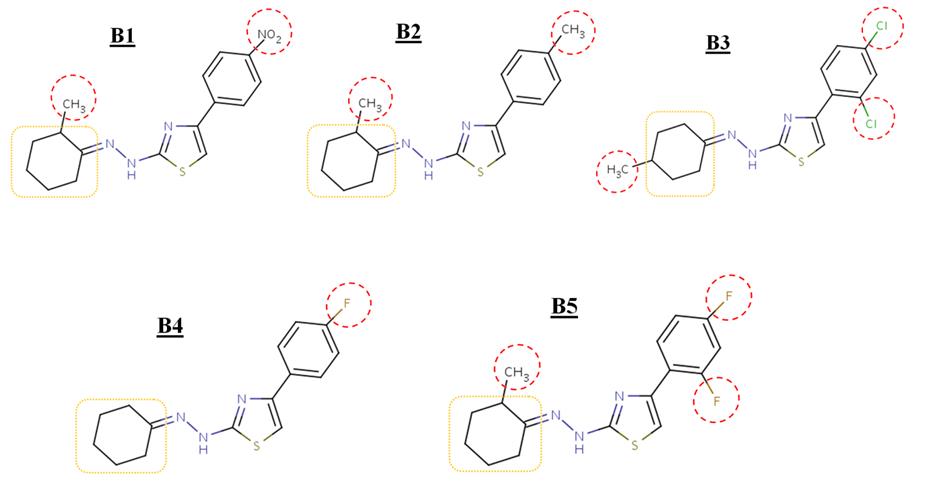 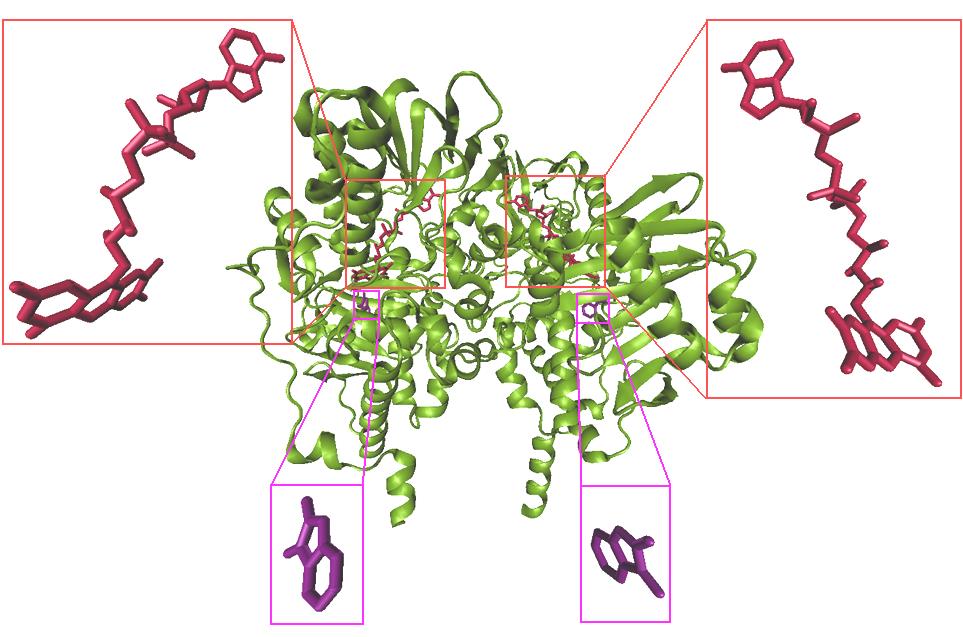 Molecular docking approach of monoamine oxidase B … interactions with many residues; in this complex, interactions. Fig 6-A shows the best virtual docking A3 was located inside the cavity that comprising pose of A3 and the superimposition of A3 and ISN, the residues such as Gly57, Gly58, Leu171, Ile198, and Fig 6-B shows the best virtual docking pose of Gln206, Tyr326, Phe343, Tyr398, Thr426, Gly434, B3 and the superimposition of B3 and ISN. In this Tyr435, Met436. And Fig 5 shows the lowest docked conformation, the A3 and B3 interact with energy configuration of B3-monoamine oxidase B flavin moiety of the FAD via a hydrogen bond and complex, B3 was located inside the cavity that show tight interactions with Gln206, Tyr326, containing the residues such as Gly57, Gly58, Phe343, Tyr398 and Tyr435 (Fig 6 A-B). For Tyr60, Leu171, Gln206, Tyr326, Phe343, Tyr398, superimposition of A3 and B3 with ISN, the indol Thr426, Gly434, Tyr435, Met436. ring is located between Tyr435 and Tyr398 in the Other interactions proposed by the docking hydrophobic cavity with an upright conformation to consequences were the hydrophobic interactions of flavin ring of FAD. Therefore, AutoDock 4.0 the inhibitors hydrophobic groups, as they were viewed as reliable for docking A3 and B3, and observed oriented towards the co-crystallized related compounds into monoamine oxidase B. ligand ISN, so that they have similar hydrophobic Figure 3. X-ray crystal structure of monoamine oxidase B in complex with inhibitor ISN (purple) and FAD (red).
Table 1. Autodock's binding free energy derived from the docking studies on monoamine oxidase B.
Inhibitor Index
∆Gbinding
∆Ginter
∆Gtors
∆Gunbound
Abbreviations: ∆Gbinding, Estimated Free Energy of Binding (kcal/mol); ΔGvdw, vander Waals or Lennard–Jones potential factor of binding free energy (kcal/mol); ΔGelec, electrostatic factor of binding free energy (kcal/mol); ΔGinter, Gibbs free energy of binding (kcal/mol); ΔGtors, torsional energy of binding (kcal/mol); ∆Gunbound, unbound System's energy (kcal/mol); Ki, inhibition constant (nM); RMSD, reference root mean square deviation ; IC50 refers to the experimental predicted activity (mM). Refrence of inhibitor. 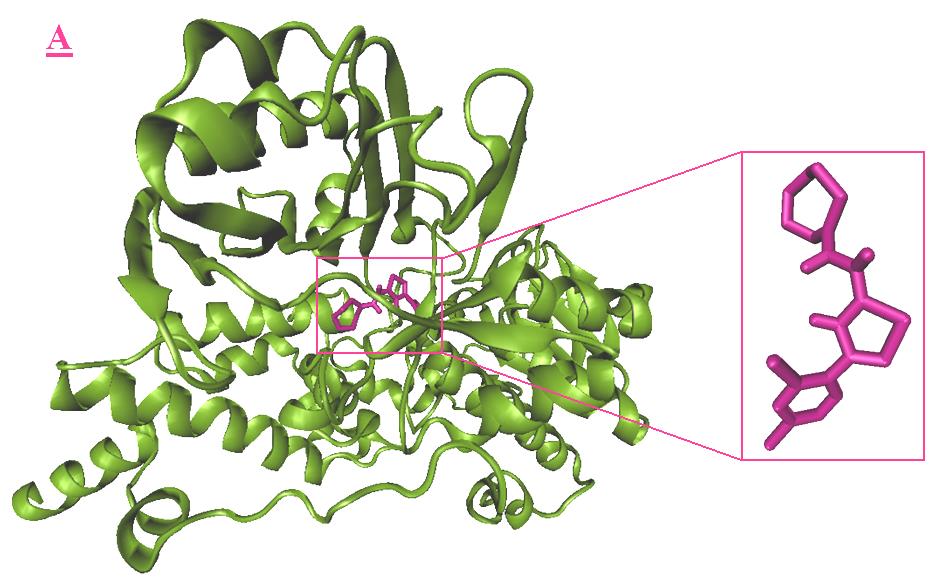 Journal of Cell and Molecular Research
Figure 4. Docking result of A3 (magenta) with monoamine oxidase B. The lowest energy configuration of A3-
monoamine oxidase B complex is demonstrated in VMD(A) and Ligplot (B) presentations. In Ligplot presentations (B),
carbons are in black, nitrogens in blue and oxygens in red. 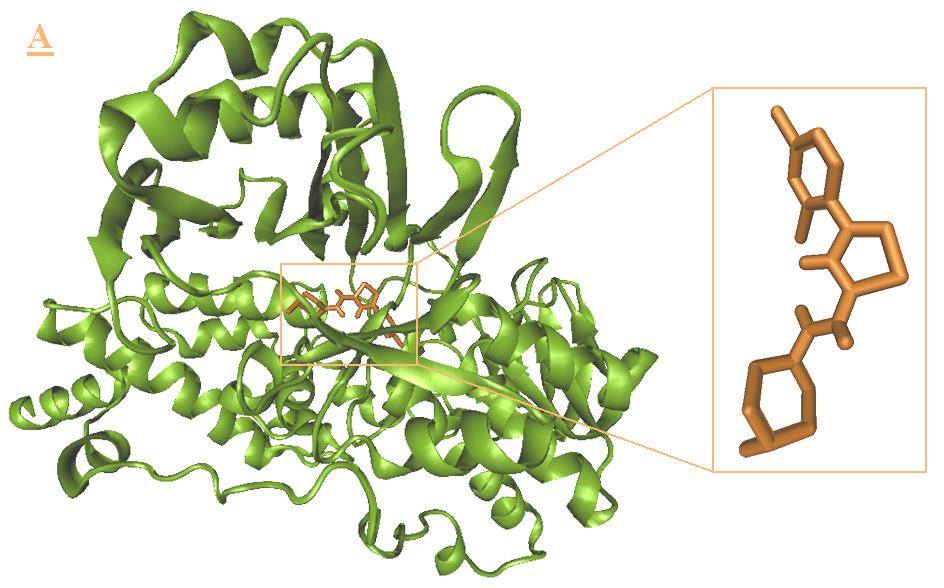 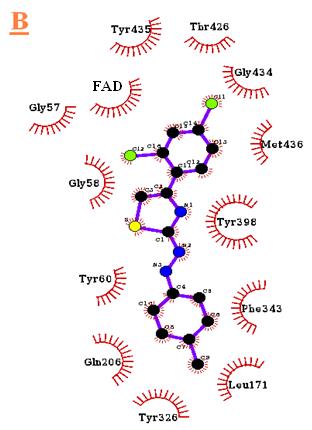 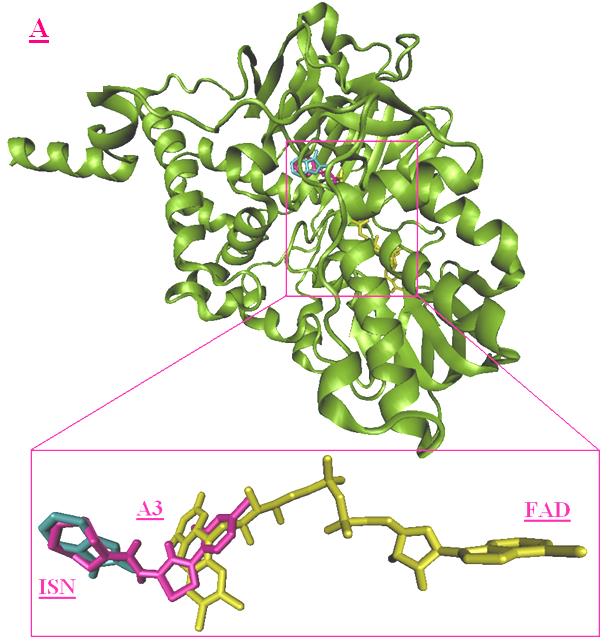 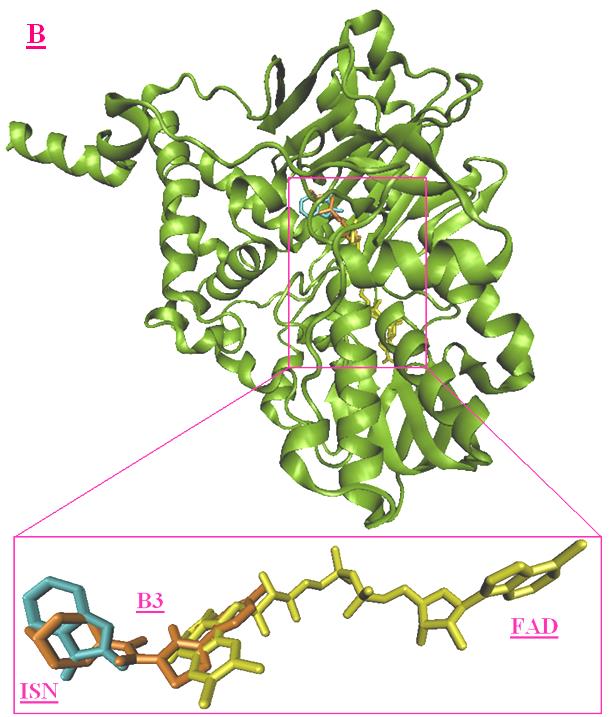