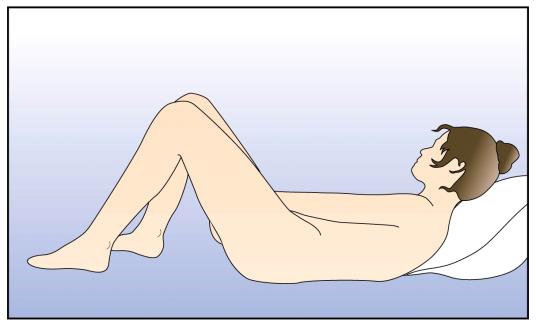 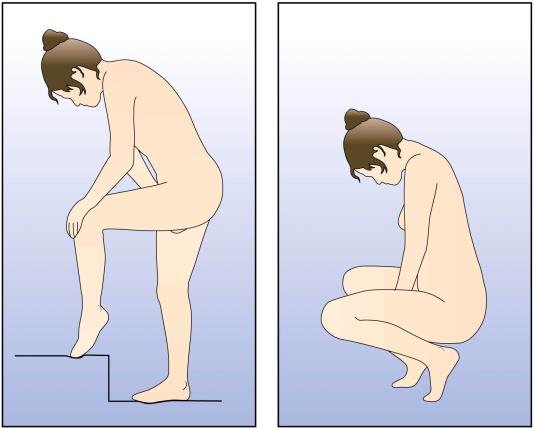 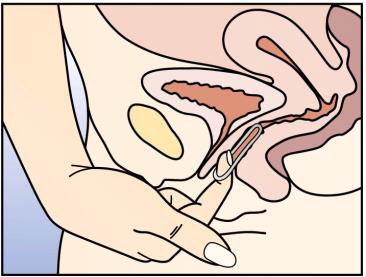 How do I insert NuvaRing®?
Although some women may be aware of NuvaRing® in the vagina, 1. After washing and drying your hands, remove NuvaRing® from most women do not feel it once it is in place. If you feel discomfort, its foil pouch. Keep the foil pouch for proper disposal of the use your finger to gently push NuvaRing® further into your vagina. ring after use. Choose a position that is most comfortable for There is no danger of NuvaRing® being pushed too far up in the
you (e.g., Figure 1). vagina or getting lost.
3. Once inserted, keep NuvaRing® in place for three weeks in
How do I remove NuvaRing®?
1. Remove the ring three weeks after insertion on the same day of
the week as it was inserted, at about the same time. For example, when NuvaRing® is inserted on a Sunday at about 10:00 PM, the ring should be removed on the Sunday three weeks later at about Remove NuvaRing® by hooking the index finger under the forward rim or by holding the rim between the index and middle finger and pulling it out (Figure 4). Figure 1: Positions for NuvaRing® insertion
2. Press the sides of NuvaRing® together between your thumb and 2. Place the used ring in the reclosable foil pouch and properly index finger (Figure 2) and gently push the folded ring into dispose of it in a waste receptacle, out of the reach of children your vagina (Figure 3). The exact position of NuvaRing® in the and pets. Do not throw it in the toilet. vagina is not important for it to work. If you are unable to remove NuvaRing®, please contact your
healthcare provider.
Your menstrual period will usually start two to three days after the
ring is removed and may not have finished before the next ring is
inserted. To continue to have pregnancy protection, you must
insert the new ring one week after the last one was removed,
even if your menstrual period has not stopped.

HOW TO STORE IT
MORE INFORMATION
Store NuvaRing® at room temperature (2–30 °C) and avoid direct This document plus the full product monograph, prepared for health professionals can be found by contacting the sponsor, Merck Canada Inc. at: 1-800-567-2594
Do not use a NuvaRing® if it was dispensed to you more than 4 months ago. The dispensing date is shown on the carton and sachet. This leaflet was prepared by Merck Canada Inc. Do not use NuvaRing® after the expiry date which is shown on the Last revised: May 12, 2014 carton and sachet. ® Registered trademark of Merck Sharp & Dohme B.V. Used under Do not use NuvaRing® if you notice a colour change in the ring or any visible signs of deterioration. 2011, 2014 Merck Canada Inc., a subsidiary of Merck &Co., Inc.
Keep out of reach of children and pets. All rights reserved. If you discover that a child has been exposed to the hormones from NuvaRing®, ask your doctor for advice. REPORTING SUSPECTED SIDE EFFECTS
You can report any suspected adverse reactions associated with the use of health products to the Canada Vigilance Program by one of the following 3 ways: • Report online at www.healthcanada.gc.ca/medeffect • Call toll-free at 1-866-234-2345 • Complete a Canada Vigilance Reporting Form and: - Fax toll-free to 1-866-678-6789, or - Mail to: Canada Vigilance Program Postal Locator 0701E
Postage paid labels, Canada Vigilance Reporting Form and the
adverse reaction reporting guidelines are available on the
MedEffect™ Canada Web site at

NOTE: Should you require information related to the
management of side effects, contact your health professional.
The Canada Vigilance Program does not provide medical
advice.

Symposium on Risk versus Hazard Symposium on Risk versus Hazard Risk versus Hazard – How to Regulate in the 21st Century Ragnar E. Lofstedt* In Europe, debate as to whether one should regulate chemicals based on intrinsic hazard or assessment of risk, or possibly a combination of both, has been gaining momentum. This article first provides a brief history of this risk versus hazard debate. Secondly, it ex-amines how European regulators are currently handling the regulation of two chemical compounds, namely Bisphenol A and Deca BDE (a brominated flame retardant), based on forty-five expert interviews with regulators, policy makers and industry representatives in eight Member States, as well as with European Commission officials. The paper shows that there is no clear consensus as to when risk or hazard considerations should be the basis for regulatory decision-making, with wide discrepancies between Member States (e.g. the UK is overall more risk based than Sweden) and between regulatory agencies within Member States. The penultimate section puts forward a series of recommendations to help regula-tors and policy makers develop more consistent and science based regulations for Europe.