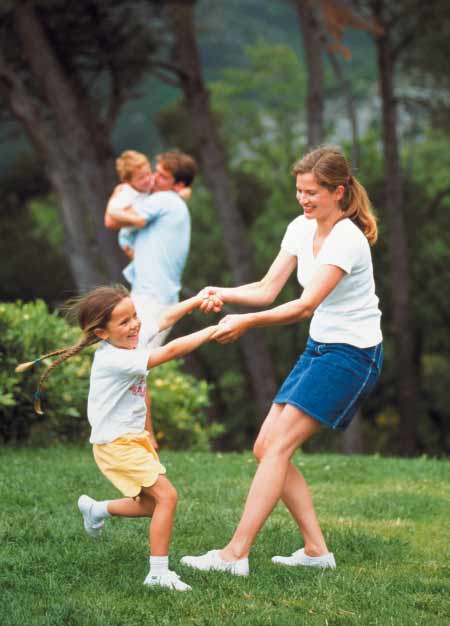 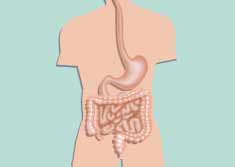 Bacterial concentrations at different sites of the gastrointestinal tract vary greatly (Fig. 1). The mucous membrane of the mouth and the surfaces of the teeth have high concentrations of bacteria, which pass, with saliva and chewed food, into the oesophagus and thereafter into the stomach, where the food is mixed with gastric juices and fl uidised. The acidity of the gastric juice effectively destroys most of the bacteria that come into contact with it. Food stays in the stomach for around four hours and is gradually released into the small intestine. The proximal part of the small intestine is also acidic due to the acid entering from the stomach. In addition, bile acids secreted into the proximal part of the small intestine destroy bacteria, so the bacteria level is relatively low. As acidity decreases and the bile acids are diluted, the bacteria level in the terminal part of the small intestine rises. The small intestine, several metres long, is densely proliferated with microvilli, which increase the internal surface area of the mucous membrane so much so that, if it were spread out, the small intestine would cover the area of a tennis court. The large surface area enables the effi cient breakdown of food and the subsequent absorption of nutrients through the mucous membrane into growth of external • systemic effects production, low pH) Immune – non-pathogenic boost, formation, lowers Lowers gasproduction Sulphate reducers Anaerobic gram pos. cocci decomposition andabsorption of food Synthesis ofvitamins Bacteria quantity log cfu/g of stool
Figure 2. The most important microbe groups, their quantities, and rough division according
to their potential for harmful and benefi cial effects (1).
the blood stream. Most of the system's immunological tissue is connected with the small intestine and can be found immediately under the epithelial cells of the mucous membrane.
The digestive tract pushes food and chyme forward by powerful peristaltic con- tractions. Moving from the small intestine to the large intestine, peristalsis slows down and sodium and chloride ions are absorbed with water into the blood stream. As a result, the contents of the bowel become more solid. At the same time the bacteria level also rises very sharply. The large intestine has an extensive bacterial metabolism. Bacteria break down the nutrients remaining in the food, such as par- tially digested proteins and fi bre components. Around half of the bulk of stools consists of bacterial mass. Between 400 and 500 species of bacteria have been r ec- L. rhamnosus L. rhamnosus GG • Group of L. rhamnosus • Can be distinguished Lactobacillus species strains in whose total from other strains of the same species by fenotype homology is >70% or genotype methods - common morphology - typical fermentation - similar biochemical profile (API50CH) - homo- or hetero- - genome analysis - probiotic characteristics: - catalase-negative adhesion, colonisation, immunological effects etc.
G+C%= the proportion of guanine and cytosine in DNA Table 1. The common and distinguishing characteristics of bacteria genera, species and
strains using the Lactobacillus rhamnosus GG strain as an example. The lactic acid bacteria
include 15 bacteria genera for which either homofermentative or heterofermentative lactic
acid production is typical. They are gram-positive cocci, rods or coccobacilli which are non-
spore forming and do not form catalase. Lactobacillus is one of the genera forming the lactic
acid bacteria group.
ognised in the large intestine and in stools. Moreover, between 100 and 1,000 times more anaerobic bacteria are present than aerobic. Genome-based research meth- ods have shown that human intestines have numerous, though as yet unidentifi ed, species of bacteria, which do not grow in the culture media currently in use. Fig. 2 presents the most common bacteria genera or groups and their main infl uence on the bacterial metabolism of the bowel.
Lactobacilli are part of the normal intestinal fl ora. They can be found in the stomach and in the proximal part of the small intestine, because lactobacilli are spe- cies that tolerate acidity relatively well. The most common species recognised on the mucous membrane of the bowel are the Lactobacillus acidophilus group (L. acidophilus, L. gasseri, L. jenseni, L. crispatus), L. casei, L. paracasei, L. rhamnosus, L. agilis, L. salivarius, L. plantarum, L. pseudoplantarum, L. buchneri and L. reu- teri. It has not been possible to identify all intestinal Lactobacillus species (2, 3). Lactobacillus rhamnosus GG (ATCC 53103), or more briefl y Lactobacillus GG or LGG, is a probiotic strain that has been isolated from a healthy human intestinal fl ora. Its probiotic effects on human well-being have been widely researched and documented in scientifi c journals. The term probiotic means live microorganisms which, when administered in adequate amounts, confer health benefi ts on the host (4). A probiotic must always be a certain bacterial strain (cf. Table 1) or a combina- tion of known strains whose composition remains stable and whose effects have been demonstrated in studies performed on humans and documented in scientifi c journals. There is a great deal of research data about Lactobacillus GG in the care and preventive treatment of different intestinal symptoms. This summary describes the effects of Lactobacillus GG in healthy intestines, its known clinical uses, and the mechanisms underlying these effects. 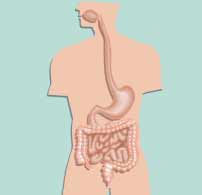