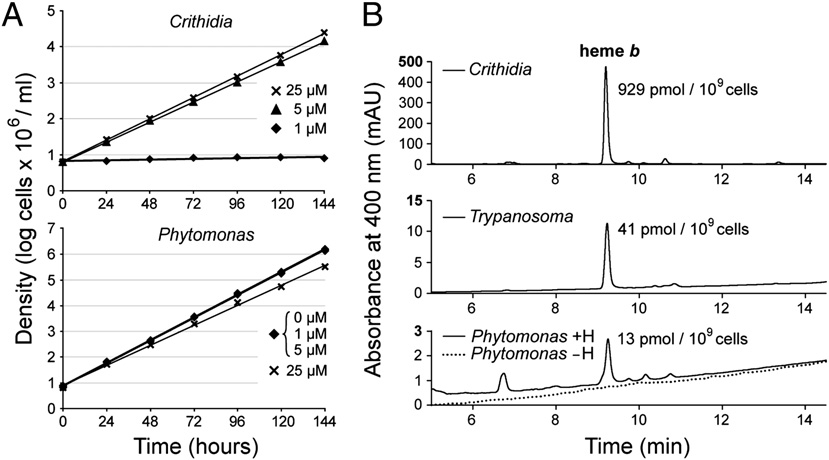 Growth dependence on availability of heme and quantiﬁcation of heme b in P. serpens and related ﬂagellates. (A) Growth rate of P. serpens is the same without heme or when heme is supplied up to a concentration of 5 μM; 25 μM heme inhibits growth, likely attributable to toxic effects of free heme. Quite oppositedependence of growth on heme concentration is observed in the closely related C. fasciculata, which grows best when supplied with 25 μM heme and stops growingwhen heme concentration in the media is lowered to 1 μM. (B) Heme b extracted from equal numbers of cells from various kinetoplastids was separated by HPLC anddetected by diode array detector. C. fasciculata was used as a related organism that possesses a complete set of respiratory complexes. It was grown in the samemedium and supplemented with the same amount of heme (5 μM) as P. serpens. The bloodstream stage of T. brucei, which does not express its respiratory complexesIII and IV in this life cycle stage, and thus functionally resembles P. serpens, was used as another control. The absence of respiratory complexes that normally consumemost of heme is reﬂected in the much lower amount of extracted heme compared with C. fasciculata. The heme content in P. serpens is even lower than in T. brucei,which is in accordance with the lowest number of heme proteins found in the Phytomonas spp. genomes among all kinetoplastids (Table 1). Not even a trace amountof heme is detected in P. serpens grown without heme (dotted line). +H, with heme; −H, without heme.
Results and Discussion into one lacking it did not alter their growth. This is in contrast to We cultivated P. serpens strain 9T in a chemically deﬁned medium related ﬂagellates, such as Crithidia fasciculata, which requires without heme continuously for over a year without heme for growth and was used as a control (Fig. 1A).
noticeable decrease of the growth rate (generation time of ∼8 h), We sought to test the heme biosynthetic capacity of P. serpens compared with parallel cultures supplemented with heme (Fig.
by measuring the amount of extractable heme. Even using a very 1A). Abrupt transfer of cells grown in heme-containing medium sensitive HPLC assay, we failed to detect any traces of heme in Heme proteins of kinetoplastid ﬂagellates Lanosterol 14α-demethylase (cytochrome P450) Heme-binding subunit of the respiratory complex II Soluble cytochrome c of the respiratory chain Cytochrome b subunit of the respiratory complex III Cytochrome c1 subunit of the respiratory complex III Heme a and heme a3 binding subunit of complex IV Heme-dependent plant peroxidase homolog 1 Heme-dependent plant peroxidase homolog 2 Δ9 Fatty acid desaturase (cytochrome b5 domain) Δ4 Fatty acid desaturase (cytochrome b5 domain) Δ5 Fatty acid desaturase (cytochrome b5 domain) Δ6 Fatty acid desaturase (cytochrome b5 domain) Nitrate reductase (cytochrome b5 domain) Fumarate reductase-like (cytochrome b5 domain) Ferric reductase (cytochrome b561) Ferric reductase (ﬂavocytochrome b558) Globin domain of adenylate cyclase-like protein Cytochromes P450 with unknown function* Cytochromes b5 with unknown function* The presence/absence data for PE and PH were kindly provided by Michel Dollet (CIRAD-BIOS, Montpellier, France) and Patrick Wincker (Genoscope, Evry, France). GenBank accession numbers are quoted for the proteinsof Leishmania major. CF, Crithidia fasciculata; Lei, Leishmania spp.; PE, Phytomonas sp. strain EM1; PH, Phyto-monas sp. strain Hart1; PS, Phytomonas serpens; TB, Trypanosoma brucei; TC, Trypanosoma cruzi.; (−), heme-binding domain is missing, but the rest of the protein is present.
*Proteins that do not have known function but were identiﬁed as either cytochrome P450 or cytochrome b5 arenot listed individually. The number of these proteins is shown for each taxon.
Korený et al.
PNAS March 6, 2012 vol. 109 no. 10 3809 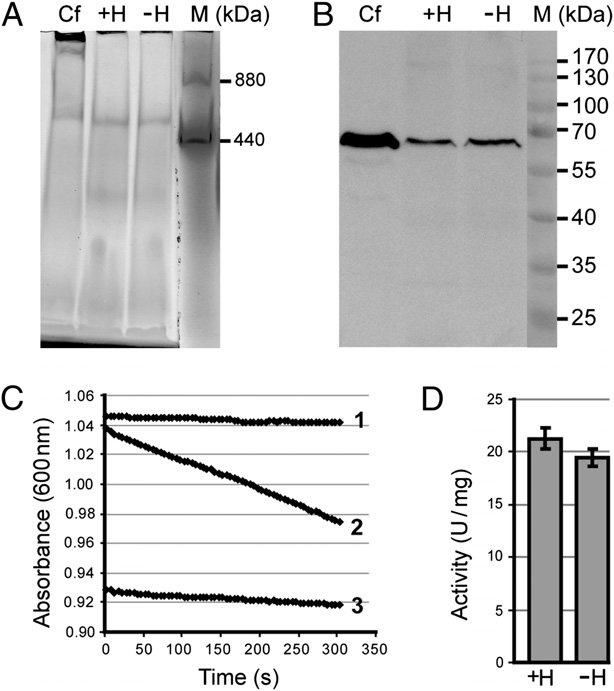 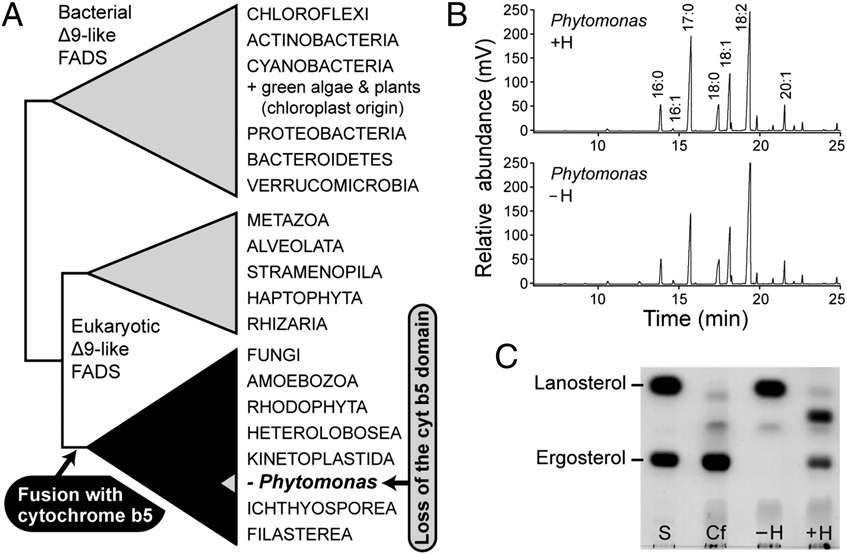 Heme is not needed for desaturation of fatty acids but is required for ergosterol biosynthesis in P. serpens. (A) Schematic phylogenetic tree of Δ9-fatty acid desaturases (FADS). P. serpens is the only organism that secondarily lost the cytochrome b5 domain. The full phylogenetic tree of Δ9-fatty acid desaturaseis shown in . (B) Analyses of fatty acid composition by gas chromatography demonstrate that in P. serpens, the desaturation of fatty acids is not affectedby the absence of heme. (C) Analysis of sterol composition by TLC. Ergosterol, which is the major membrane sterol of Trypanosomatida, and lanosterol, theprecursor of heme-dependent demethylation, were used as standards (S). C. fasciculata (Cf) served as a control. P. serpens synthesized a sterol that corre-sponded to the ergosterol standard only when heme was added to the growth medium (+H). Cells grown without heme (−H) accumulated lanosterol.
event among all known eukaryotes. To assess the ability of P.
P. serpens possesses this unique capability as well. Based on the serpens grown in the absence of heme to desaturate fatty acids, TLC analysis, the cells synthesized a sterol that corresponded to we analyzed their composition by gas chromatography. We found the ergosterol standard only when heme was added to the growth that P. serpens contains unsaturated fatty acids and that their medium. In contrast, they accumulated lanosterol in the absence composition is virtually the same regardless of the presence or of heme with no impact on cell viability (Fig. 3C). The fact that absence of heme (Fig. 3B). These ﬁndings indicate that for the certain eukaryotes are able to use lanosterol but others are not is desaturation of fatty acids, P. serpens is able to use an electron very interesting and implies the existence of some regulatory donor other than cytochrome b5. It may likely be ferredoxin, mechanism. Cholesterol-deﬁcient human T cells can adapt to which serves this role for the desaturases of some bacteria and growth with lanosterol; the initial growth of these cells dropped plant plastids. For example, the plastid Δ12 fatty acid desaturase 10-fold when cholesterol was depleted, yet their prolonged cul- of plants and diatoms depends on ferredoxin as an electron tivation resulted in a growth rate ∼65% that of the cholesterol- donor, whereas a homologous desaturase with the same function supplemented cells (46). A study on yeast revealed that what in the endoplasmic reticulum of the same organisms, as well as in regulates the incorporation of lanosterol in the membranes is the other eukaryotes, uses cytochrome b5 (40). The possibility that level of synthesized heme (47). The growth of P. serpens in the these redox molecules could substitute for each other has been absence of heme precludes the activity of CYP51; thus, this experimentally demonstrated in E. coli and in yeast expressing ﬂagellate meets the two conditions that are required in yeast for cyanobacterial Δ6 fatty acid desaturase (41). Although ferre- lanosterol utilization (low heme levels and CYP51 inhibition).
doxin is the natural electron donor for this desaturase, cyto- Overall, there are several cellular processes for which heme is chrome b5 fully complemented its function when fused or crucial in a typical eukaryote, yet it is dispensable in P. serpens.
coexpressed with the desaturase enzyme. Three different ferre- Somewhat lower dependence of a typical kinetoplastid on heme doxin homologs were identiﬁed in the genomic sequences of P.
has been noted when cystathionine-β-synthase, a hemoprotein of animals and amoebae that is essential for cysteine formation, was The oxidative 14α-demethylation of lanosterol, another key reaction in the eukaryotic cell, fully depends on heme. Its sub- shown to lack heme in kinetoplastids (48). However, P. serpens is stitution by means of analogous nonheme enzyme has never been unique, because it lacks most hemoproteins that are present even documented. This reaction is a crucial step in the synthesis of in closely related protists. Moreover, the few retained in the P.
sterols, such as cholesterol in animals or ergosterol in fungi, as serpens genome are not crucial for its survival, at least under well as in protists, including kinetoplastid ﬂagellates (42). It is culture conditions. In addition to CYP51 and the SDH4 subunit catalyzed by lanosterol 14α-demethylase (CYP51), which belongs of respiratory complex II, we identiﬁed 13 proteins that sup- to the cytochrome P450 family, found in most eukaryotes, in- posedly bind heme, because they are homologous to cytochrome cluding Phytomonas spp. (Table 1). No eukaryotic cell can b5 (Table 1). Their functions are unknown, however, and 5 of function without sterols or their analogs in its membranes; in- them lack the HPGG heme-binding motif typical for cytochrome hibition of this enzymatic step is thus frequently lethal (43).
b5 (41). Thus, it is by no means certain that these proteins ac- Consequently, CYP51 is a popular target of fungicides and other tually bind heme in vivo. One of them is a protein recently drugs, which are also effective against kinetoplastids (44). Until identiﬁed in the ﬂagellar proteome of T. brucei, shown to be now, the only kinetoplastid known to be naturally resistant to indispensable for the bloodstream stage but nonessential for the inhibitors of CYP51 is Leishmania braziliensis, a ﬂagellate closely procyclic stage (49). Therefore, the only process for which heme, related to Phytomonas, which seems to be able to incorporate if present, was found to be actively used by P. serpens, is the 14-methyl sterols into its membranes (45). We have found that 14α-demethylation of lanosterol in the ergosterol biosynthetic Korený et al.
PNAS March 6, 2012 vol. 109 no. 10 3811