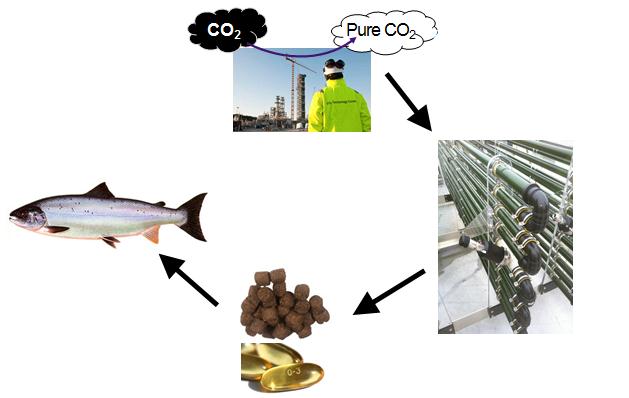 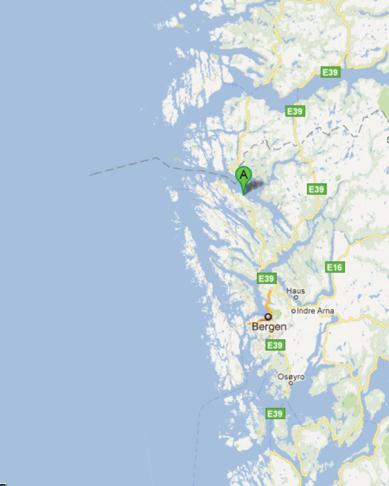 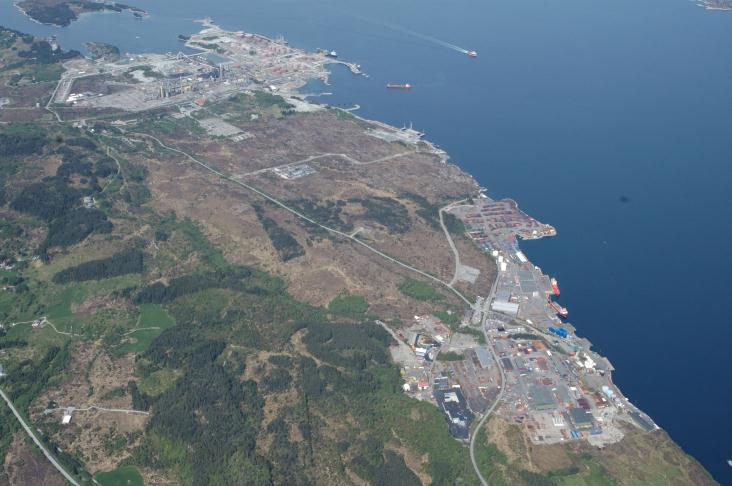 Mongstad (60°48'47" North, 5°1'14" East) is located on the south-west coast of Norway, about
65 km North of Bergen which is the second largest city in Norway (figure 1). Bergen is the ad-
ministrative centre of Hordaland County, recognized as the unofficial capital of Western Nor- way. At Mongstad, the industrial site is located in the municipalities of Lindås and Austrheim. The industrial site features an oil refinery for Statoil with port facilities1, with an unexploited area in the South that is relatively flat and marshy, partly covered with heather and conifers. 1.1.2 Mongstad oil refinery
At Mongstad, Statoil has a crude oil terminal with a capacity of 10 million barrels/year2. The
port at the support facility Mongstad is the largest in Norway, measured in tonnage. The refin-
ery at Mongstad is modern, and has been extensively upgraded, with a capacity of 10 million tonnes crude oil per year. The refinery is the largest in Norway, though medium sized by Euro- pean standards. It is owned by Mongstad Refining, in which Statoil has a 79% ownership share and Shell 21%. All the crude oil refined at Mongstad comes from the North Sea. The largest pro- duction is petrol, diesel, jet fuel and light petroleum products. The heaviest components are used to make petrol coke, an important ingredient in anodes for aluminum production. In 2010, Statoil and DONG Energy opened Mongstad power station, a natural gas-fired thermal power plant, to provide the site with heat energy and electricity, as well as to the Troll gas field. The station is owned and operated by DONG Energy, and will be integrated in the Statoil refin- ery. The power station will have an installed effect of 280 MW in electricity production and 350 MW in heat. The energy will be used to operate the Mongstad Refinery as well to supply the Troll Gas Field with power. The plant will use 0.7 normal cubic meter (BCM) gas per year. Emis-sions of CO2 will be up to 1.2 million tons. 1.1.3 CO2 Technology Centre Mongstad (TCM)
The CO2 capture at Mongstad is central to the Norwegian government's efforts to obtain tech-
nologies that can reduce emissions of CO 3 2 , in line with Norway's commitment to the Kyoto Pro- tocol4. Development of technologies for CO2 capture is difficult and there will always be uncer- tainty involved in the development of technologies from the research stage to industrial scale. Fig 1: Mongstad Industrial site. A) Location of Mongstad, 65 km North of Bergen, on the south-west coast of Norway; 60°48'47"
North, 5°1'14" East, at 10 meters above sea level. B) Aerial photo taken showing Mongstad industrial site from South-East. The Statoil oil refinery shown in the North (top) and the Mongstad support base in the South, surrounded by undeveloped industrial land. 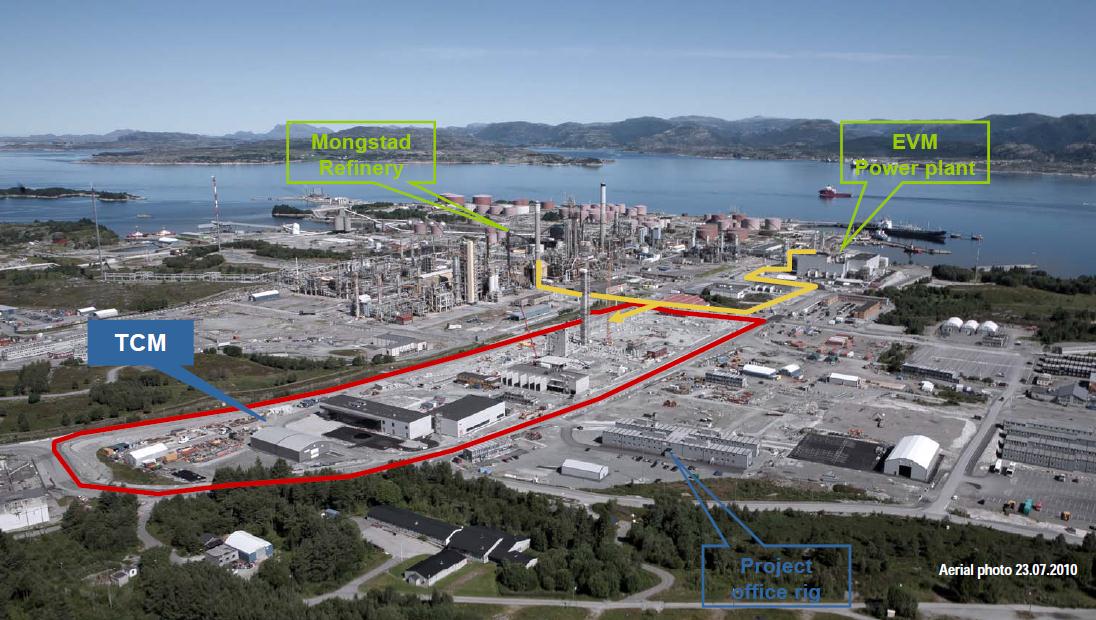 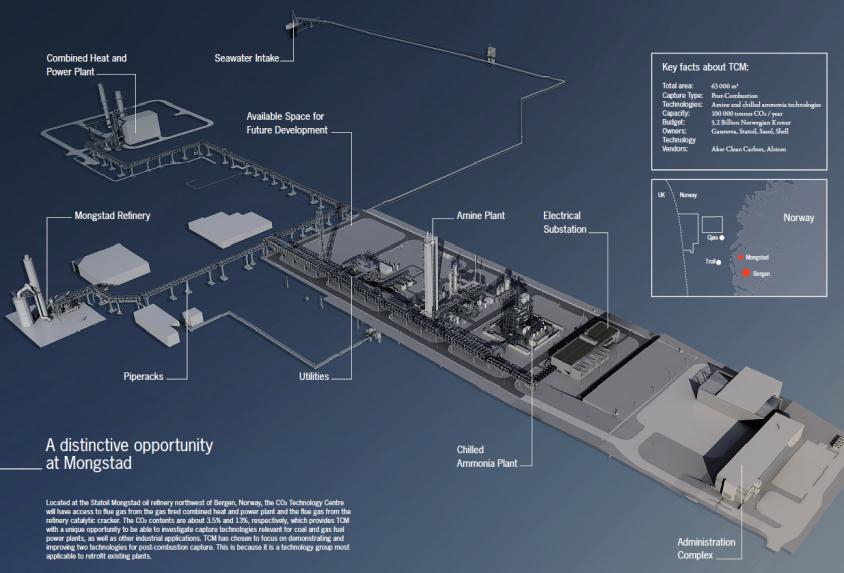 Pilot phase 3 – Research and development of low-cost PBRs
Aim: Develop low-cost PBRs
The third phase will be the first research and development stage where alternative low-cost pro-
duction solutions will be subject to feasibility studies in pilot scale (2,4 m2 up to 24 m2). The al-ternative PBRs will be designed in collaboration with partners and tested under relevant condi- tions with selected algae to evaluate their cost-effectiveness. In parallel, the challenges of de-watering and biorefining for the aquafeed market will be addressed. Overall, these feasibility studies will enable better estimations of production costs under the given conditions at Mongstad. The outcome of this phase should be the selection of one clear candidate PBR considered fit for purpose from a decision process based on predetermined production performance parameters and product-specific criteria.
Deliverables: Defined PBR system qualified for up-scale studies
Pilot phase 4 – Up-scale of selected low-cost PBR unit
Aim: Verify scale up of identified PBR system
The selected low-cost PBR unit from Phase 3 will be constructed in a near production-scale set up
(50-100m2), to study the effects of scaling and optimization of large-volume systems. In this
phase, we aim to study production stability and gather more precise data about production costs based on an optimized and focused production, dewatering and refinery with the focus on a spe- cific product. Ultimately, this will contribute to verify fitness for purpose of a specific ‘PBR and al- gae'-combination in a cost-effective, full-scale production setting.
Deliverables: Defined PBR system suitable for full-scale production at Mongstad
2.10.4 Collaboration with national partners
The current research on industrial microalgae production in Norway is limited to the larger uni-
versities (UiB, UiT, UMB) and research institutes (Uni Research, Sintef). We have a strong col- laboration with members of the research group on algal physiology at the University of Bergen, where Dr. Anita Jacobsen have long experience and high competence in the field of commercial scale production. Jacobsen will be an integrated partner at Uni Environment, together with Dr. Siv Kristin Prestegard who will be responsible for the microalgae collection at the Bergen Ma- rine Biobank under Uni. However, there are strong researchers on algal physiology in Tromsø, expertise in reactor optimization at Sintef in Trondheim and the use of commercial Biofence- reactors at UMB at Ås. During a national workshop on microalgae in Tromsø 11-12th October 2011, a working group memo suggested to Innovation Norway and NFR to establish a national forum for microalgae. This can be an important arena for the development of good research collaborations required to support the CO2 to Bio pilot facility.
Recommendation:
 Be an active part in the establishment of a national forum for microalgae, and be visible for potential collaborators. 2.10.5 Collaboration with Prof Rene Wijffels and AlgaePARC at Wageningen University
The AlgaePARC focus on the technology development towards more cost-efficient production sys-
tems suitable for future industrial production, and is therefore very much in line with the CO2 to Bio- project aims. Prof Rene Wijffels and the AlgePARC team have a strong international position and scientific competence within this field, and are interested to contribute to the CO2 to Bio-project in demonstrating the viability of industrial microalgae production. The collaboration can be both on the establishment of a pilot production facility at Mongstad and the following research activity. Such collaboration may be subject to regulations laid down by the AlgePARC consortium.
Recommendation:
 Enter a formal collaboration in the development of a pilot facility at Mongstad.
 Enter a research collaboration to ensure high international competence involvement. CO2 to Bio/WP2 – Algae production
References