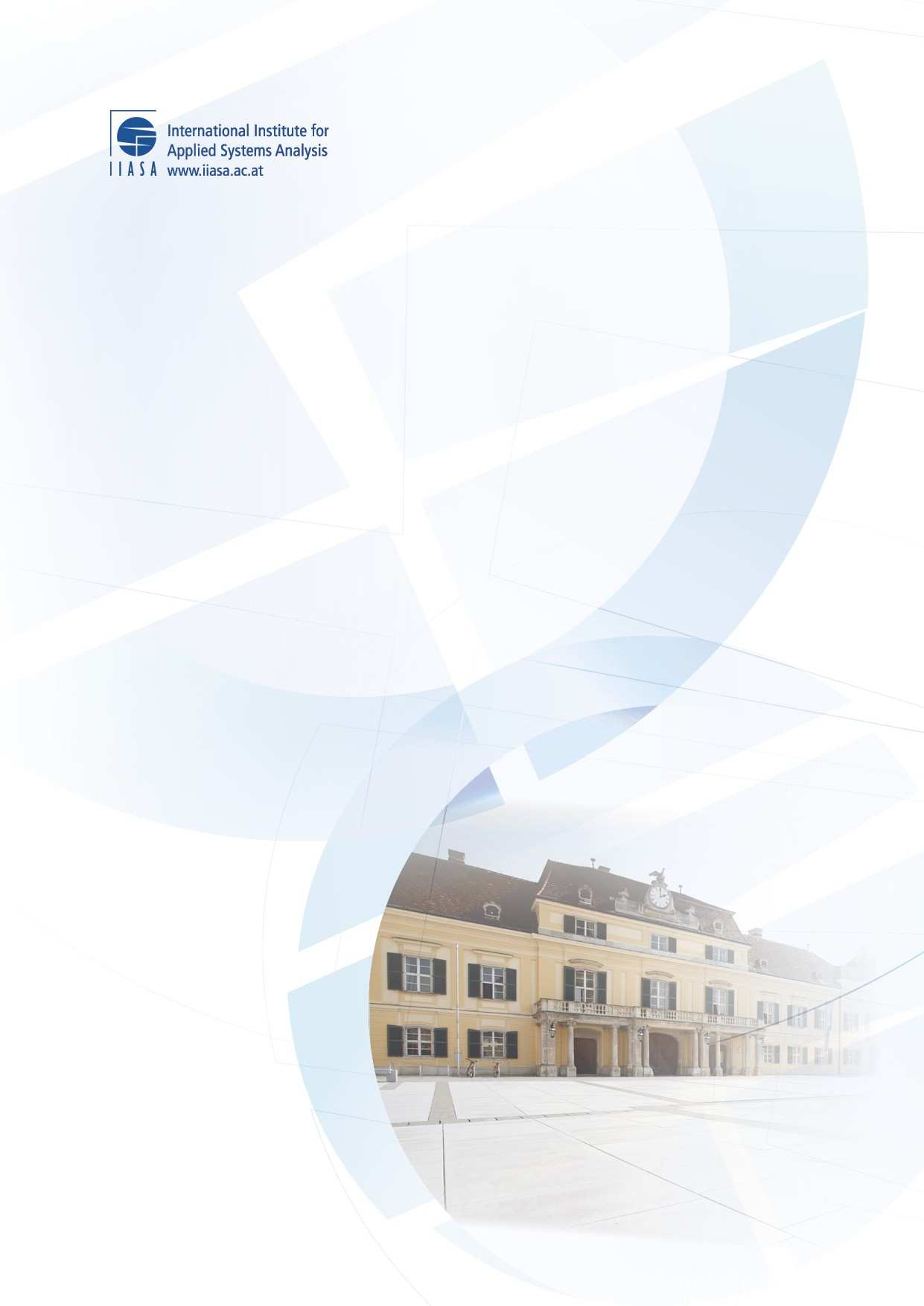 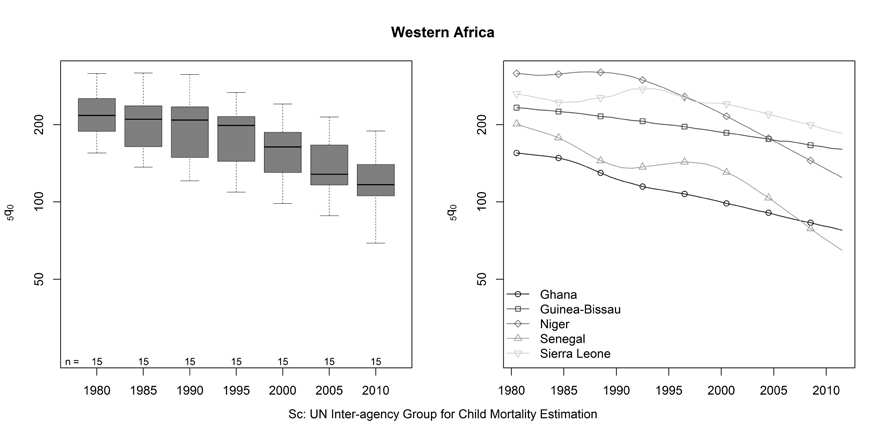 Micronesia, Lao PDR and Namibia, and 7 times greater than that for Botswana (Table 1). The difficulty involved in making accurate projections of future trends in life expectancy for countries with high levels of mortality is illustrated by examining the trends in child mortality within these countries over the past three decades, time periods for which reasonably reliable estimates of child mortality levels have been made (You et al. 2011) Figure 2 to Figure 7 show the trends in the under-five mortality rate for countries separated by region. For regions with many high mortality countries, the overall trend and distribution is indicated by a series of boxplots accompanied by examples of different country-specific trends to indicate the range of variation in the patterns. The countries shown in the right-hand panel are those with the greatest and slowest rate of change between 1980 and 2011, those with the highest and lowest mortality rates in 2011, and examples of atypical trends. In 1980 the fifteen countries of Western Africa experienced very high child mortality, averaging 226 (deaths to children less than 5 years of age for every 1000 live births) and ranging from a high of 317 in Niger to a low of 155 in Ghana (Figure 2). Over the next 3 decades, the rate of child mortality declined in every country, but the amount of decline varied from 67-68 percent in Liberia and Senegal to just 29-30 percent in Mauritania and Sierra Leone. For many Western African countries, the declines in child mortality have been steady, albeit at different rates, as typified by Ghana and Guinea-Bissau (Figure 2 – right panel). However, for Sierra Leone, Niger, Liberia and Nigeria, little or no progress was made between 1980 and the mid- to late- 1990s, followed by much more rapid declines in the last decade. By 2011, the average child mortality rate for these countries was 120 and ranged from 185 in Sierra Leone to 65 in Senegal, but the variation in the pattern and pace of decline produced a quite different ranking of countries by level of child mortality in 2011 compared with 1980. Figure 2. Trends in the under-five mortality rate, Western Africa. 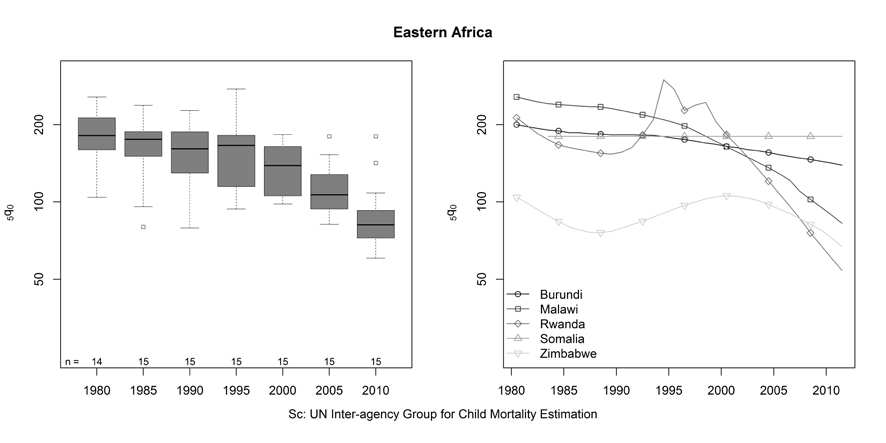 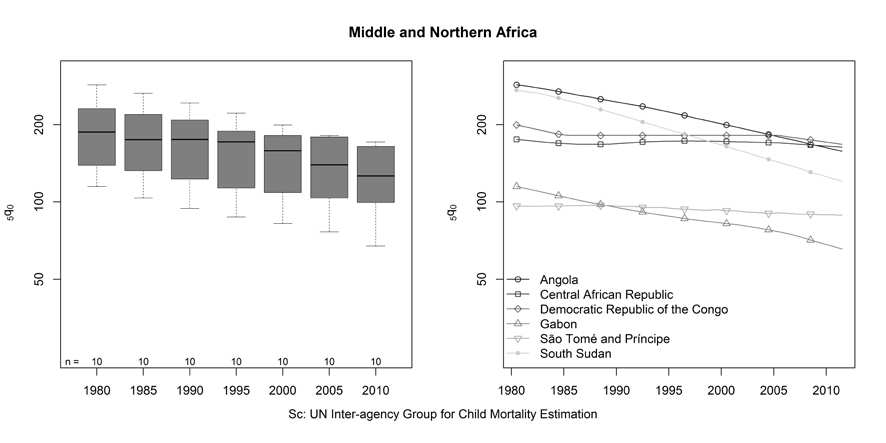 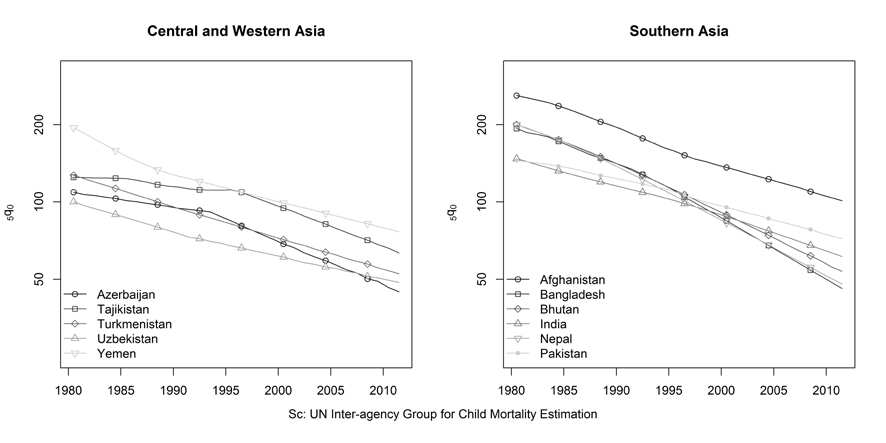 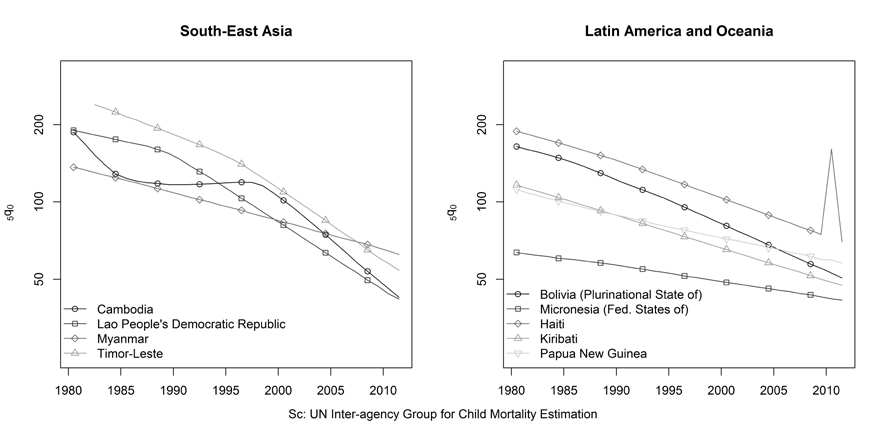 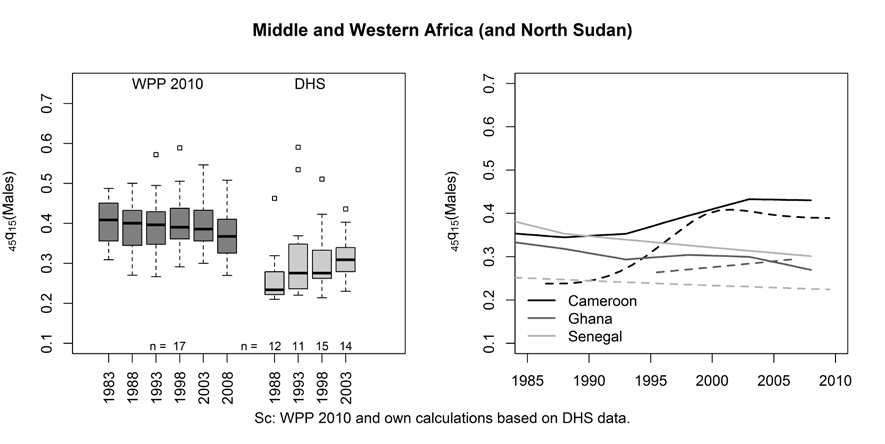 Sudan), in which at least one set of sibling survival data was collected in the DHS. Trends from the 2010 Revision of the WPP (United Nations 2011b) are presented alongside estimates derived from DHS. Sibling estimates largely fare as lower bound estimates. The right-hand side of Figure 8 singles out some countries and compares WPP estimates (solid lines) with DHS estimates (dashed lines). In Senegal, for example, the male probability 45q15 for 2004 is about 35 percent higher in the WPP than in the DHS. Large discrepancies are also found in Cameroon prior to 2000, while there is a better agreement in Ghana. Figure 8. Trends in the probability of male dying between ages 15 and 60 in 18 countries in Middle, Western Africa and North Sudan, from the 2010 Revision of the World Population Prospects and DHS sibling histories. Estimates in Eastern and Southern Africa can be quite discrepant as well, as illustrated with Malawi, for which sibling-based estimates are lower in the pre-AIDS period, but higher in recent years. Reniers et al. (2011) already noted that discrepancies between WPP and DHS estimates are larger in settings with small HIV prevalence, especially in the Sahelian countries. They speculated about the reasons for this and suggested that recall errors could be more pervasive in surveys conducted in Western Africa because of greater complexity of family structures (due to higher fertility rates and polygyny). Another explanation is that sibling histories underestimate mortality irrespective of the region, but this is obfuscated in countries affected by HIV/AIDS. This could be the case if WPP estimates were themselves too low in these countries, potentially because of recent downward revisions of HIV prevalence (Reniers & Eaton 2009). However, this explanation needs to be supported by further investigations. 2 North Sudan is the only country from Northern Africa covered by sibling data (apart from Morocco, not included here), because South Sudan was not covered in the 1989-90 DHS. The 2010 WPP estimates refer to the former Sudan. Estimates for Rwanda in 1993 or 1998 are not included in the graphs due to the extremely high mortality levels related to the genocide. DHS estimates for Middle and Western Africa are only presented up to 2003 because few countries have conducted a DHS with sibling histories after 2008. 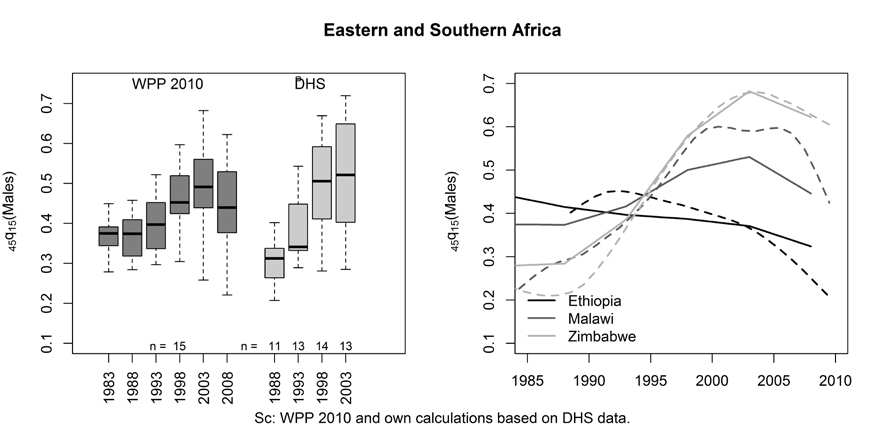 The combined effects of L-theanine andcaffeine on cognitive performance and mood Gail N. Owen1, Holly Parnell1, Eveline A. De Bruin2, Jane A. Rycroft1 1Unilever Research and Development, Colworth House, Sharnbrook, Bedford, UK 2Unilever Food and Health Research Institute, Unilever R&D Vlaardingen, The Netherlands The aim of this study was to compare 50 mg caffeine, with and without 100 mg L-theanine, oncognition and mood in healthy volunteers. The effects of these treatments on word recognition,rapid visual information processing, critical flicker fusion threshold, attention switching and moodwere compared to placebo in 27 participants. Performance was measured at baseline and again 60min and 90 min after each treatment (separated by a 7-day washout). Caffeine improved subjectivealertness at 60 min and accuracy on the attention-switching task at 90 min. The L-theanine andcaffeine combination improved both speed and accuracy of performance of the attention-switchingtask at 60 min, and reduced susceptibility to distracting information in the memory task at both 60min and 90 min. These results replicate previous evidence which suggests that L-theanine andcaffeine in combination are beneficial for improving performance on cognitively demanding tasks.