Vehicle electrification become and continues to be the major trend in the automotive industry and a main part of this is batteries. Unfortunately the battery testing presently does not represent the real-
world condition, in which the bat ery load profile comprises complex charge-discharge wave. Therefore in
this study, the load profile of bat eries for electric vehicles was investigated. An integrated simulation and
testing approach is used to predict the bat ery load. In simulation the bat ery load profile is calculated
based on the utilization of vehicle and battery model. The present vehicle and bat ery model are
developed using a vehicle dynamics technique and equivalent circuit modeling technique respectively,
whereas the model development is focused on a specific vehicle which converts conventional propulsion
into pure electric propulsion. The results are demonstrated through the current profile of advanced
bat eries subjected to standard driving cycles. With this approach, the battery loads correspond to actual
driving condition or any driving cycle can be predicted and can be used for bat ery testing. This creates a
new aspect to evaluate advanced bat eries for power train application.
Keywords: Current Profile, Vehicle Modeling, Bat ery Modeling, Driving Cycle
1. Introduction
some bat ery parameters but still not suite to All major car manufacturers are planning investigate, for example, the bat ery life or heat to bring out electric cars in the near future. This generation. It is not suitable to use as tool for trend drives the development of high power design bat ery subsystem such as bat ery bat eries such as lithium-ion bat eries. Although thermal management. lithium-ion bat eries are widely used for electric This paper describes an approach to vehicles, there is no testing standard for those determine the bat ery load profile comprising bat eries [10]. The bat ery test profiles presently complex charge-discharge wave from real-world base on constant current or step response technique which does not represent the real- world condition. They may be used to investigate

The Second TSME International Conference on Mechanical Engineering 19-21 October, 2011, Krabi 2. Vehicle Dynamics Modeling
speed, x is the vehicle speed, and Jred is the The vehicle dynamic model can be reduced mass moment of inertia at wheel. derived from Newton's second law considering The vehicle considered in this work is all the forces applied upon the vehicle. It should the two year used HONDA Jazz that will be be noted that only the longitudinal dynamic is converted to a pure electric vehicle. The existing sufficient to investigate the bat ery load profile. engine will be replaced with a 40kW new With this the complex and uncertain parameters developing motor. The vehicle uses a 100 cell as well as the simulation time can be reduced. lithium-ion bat ery (type: LiFeYPO4) as power The total resistance forces acting on the source. The total capacity is 60Ah. The vehicle vehicle are rolling resistance, aerodynamic uses the original transmission modified to use resistance, and grade resistance force, as the 3rd gear ratio. The vehicle specification is demonstrated in Fig. 1. shown in Table 1. Table. 1 Vehicle specification Value/Description 2 Weight distribution 62/38 (%) 4 Drag coef icient Fig. 1 Resistance force acting on the Hence, the vehicle dynamic equation can be obtained as 3.461, 1.869, 1.303 F  F  F  F  F Eq. (1) 8 Final drive ratio F  mg( f  f x)sgn(x)  mgsin  A (x  x )2 sgn(x)  (m continuous power roll is rolling resistance, Fad is the aerodynamic resistance, F resistance, m is the vehicle mass, g is the 12 Battery Capacity 60 (Ah) natural acceleration,  is the angle of grade, f 13 Number of cells 14 Battery weight 1 are the rolling coef icients,  is the air density, Cd is the aerodynamic drag coef icient, Af is the vehicle frontal area, x is the wind simulations there are various types of mathematical models available. In this work the 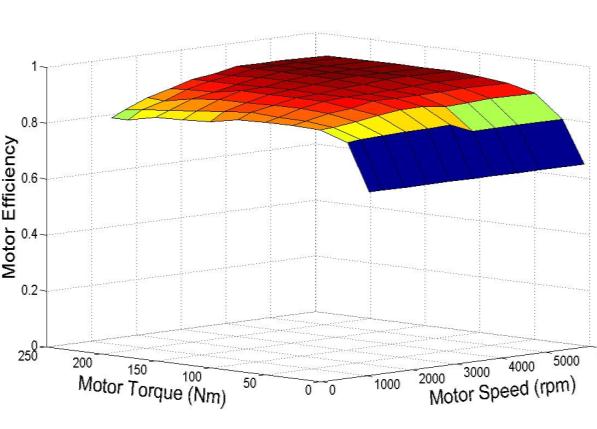 The Second TSME International Conference on Mechanical Engineering 19-21 October, 2011, Krabi vehicle model was created by using a transient effort-flow refer to [1]. Ef ort-flow in the model refers to the combinations of torque/angular speed, force/velocity and voltage/current. The basic configuration of the electric vehicle used for simulation is illustrated in Fig. 2. Overall system is modeled in a MATLAB/ Simulink environment. Fig. 3 Efficiency map of the electric motor 3. Battery Modeling
3.1. Battery Model
A bat ery model calculates the bat ery variables like current, voltage, and the battery temperature. The bat ery is modeled as an equivalent circuit with a bat ery internal resistance, as shown in Fig. 4. The model uses Fig. 2 Electric vehicle configuration data from experiment described in the next Vehicle system models typically contain a mix of empirical data, engineering assumptions, and physical based parameter and algorithms. Driven by the need for fast simulation times, complex components such as motor are typically simulated using empirical data in form of lookup maps. For example, the electric motor is modeled using an efficiency map handled as a 2-D lookup table indexed by Fig. 4 Bat ery Model rotor speed and torque. This map is generally The model consists of voltage source obtained via experiments. In our case the generating an open-circuit voltage (OCV) and a efficiency map of electric motor is unknown resistor representing the internal resistance (R). because the motor is presently constructing. Both parameters can be described as a function Therefore the scaling of torque to provide the of state of charge (SOC) and temperature. The required maximum power has been done. This internal resistance is considered separately type of scaling is valid only for the same motor between charge and discharge process. type and in the neighborhood near the actual The state of charge was estimated by parameter. The efficiency map of the electric coulomb counting (current based SOC motor is shown in Fig. 3. estimation). The SOC is obtained by measuring the current flowing into and out of a battery and

Vol. 7 No. 1 is new AHMOPI President By : Camille "Camry" T. Silos IntelliCare Chairman level-playing field for all and President, Mario M. Silos, companies who are a part ofis the newly-elected president of AHMOPI to compete with eachthe Association of Health other without undue advantageMaintenance Organizations of or disadvantages, as well asthe Philippines, Inc. (AHMOPI). providing a venue where theIt is a non-stock and non-profit members can give advice toumbrella organization composed other members in the associationof all the major HMOs and other and discuss various relevantsimilarly-engaged pre-paid topics with each other. Lastly,healthcare companies in the AHMOPI is a vehicle by whichcountry.