Technology Cluster: TRANSPORTATION
Technology Platform: NOVEL ENGINE DEVELOPMENT
Modeling, design, modification and testing of length is x . The piston on a left to right stroke traverses EMF linear generator of a new free-piston gas from –x to +x . The friction force required to move the generator. (Project Leader: Prof. Khalid Md. Nor.) slider is F . The quantity of heat added to one cylinder during a cycle is Q . The force balance for the left-to- Figure 1 shows the scope of each project, breakdown right (expansion) stroke can be written as in Equation of the activities along with the approximate duration (1) with x positive in the left-to-right direction: for each phase of the project. The Program is funded by the Ministry of Science, Technology and Environment (MOSTE) under the Intensified Research In Priority Areas Programme (IRPA) Grant No. 03-99- where P and P are the instantaneous pressure in the 02-0000-PR0025/4-00. Universiti Teknologi PETRONAS combustion and kickback cylinder, A and A are the acts as the Programme Leader for the project.
areas of the piston in the combustion and kickback chamber, respectively, F is the frictional force, and m RESULTS AND DISCUSSION
is the mass of the translator.
Results of numerical studies of piston velocity in a A numerical experiment about the proposed linear engine incorporating combustion and kickback variational algorithm has been done using the are presented. Initial study of equal-bore cylinders following values of parameters: P shows a larger piston velocity after combustion due 100,000 Pa, Q = 196 J, x = 0.025 m, b = 0.05 m, F = to the lower air pressure at the kickback end of the 900 N, n = 1.33. The velocity and the position had engine. By using variational principle, computations been found by using a numerical integration applied are performed to determine a velocity function as long during expansion and compression strokes, as the piston head does not exceed the maximum respectively. Using the procedure, the initial bore scale position. This function is an important factor to avoid of 1 has been chosen by assuming that the kickback knocking that reduces the compression ratio and bore must be larger than the combustion bore. The engine thermal efficiency.
iteration results are the maximum translator position at each bore scale as depicted in the left side of Figure Consider a two-stroke linear engine model as shown 3. From the figure, it can be seen that the maximum in Figure 2. To derive the governing equation a priori, the following independent variables are specified. The combustion and kickback cylinder bore are b and b respectively. The maximum theoretical half-stroke Figure 3: Kickback Bore Scale and Maximum Translator Position
Figure 2: Schematic View of the Linear Engine [6]
During Iteration [6] VOLUME THREE NUMBER ONE JANUARY - JUNE 2003 PLATFORM 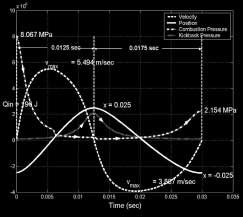 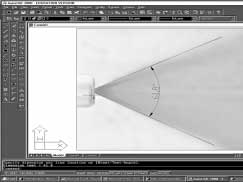 Technology Cluster: TRANSPORTATION
Technology Platform: FUEL COMBUSTION
Table 1: Configuration of the selected spray atomizers.
Q (L/min)
Nominal Spray Angle (catalogue)
Figure 4. The orientation of camera installation.
atomizers. For identification, atomizers were labeled as, The spray angle was obtained by direct measurement for example 0.4-80, meaning rated at 0.4 L/min flow on the spray images captured using the JVC model TK- and 80° nominal spray angle, or the Lechler 214.245.30 C600E color video camera with RS Components Ltd.
atomizer, if referred to Table 1.
625-772 zoom lens of 18-108/2.5. The image of a steady spray was recorded for ten seconds in videotape using The atomizer holder was fabricated such that the the 4-head double density Computar CTR-3024 video nozzle could be shifted horizontally along the recorder. To get an average value, three frames of spray centerline of the confinement tube. In addition, proper images were transferred into the computer in the form positioning and alignment with the tube axis were of JPEG (Joint Photographic Experts Group) files with made by adjustment at the holder. Three mounting the use of frame grabber interface and the Image Folio positions were selected in this experiment, as indicated v.3.0 and the Video Work v.1.5 software.
in Figure 3.
The spray pictures were then copied into AutoCAD, The video camera was mounted on a tripod at a fixed where lines were carefully drawn between a point position thus allowing the camera to capture a vertical adjacent to the atomizer outlet, and the farthest point area coverage of 75-mm wide by 55-mm high at the on the spray boundary where the edge could be clearly center plane of the tube, which was satisfactory for the defined, as shown in Figure 5. The spray boundaries measurement of spray angles resulted from all the nine were drawn carefully to ensure satisfactory nozzles. Figure 4 shows the orientation for the camera representations of the free edges that had a sharply P1 = 65 mmP2 = 127 mmP3 = 176 mm Figure 5. A sample measurement of spray angle by using
AutoCAD.
Figure 3. The nozzle horizontal position.
VOLUME THREE NUMBER ONE JANUARY - JUNE 2003 PLATFORM
Technology Platform: FUEL COMBUSTION
Technology Cluster: TRANSPORTATION
defined interface, which separated fluid with vorticity occur in the case of 0.2-80, as shown in Figure 8, where and fluid without vorticity. Having the two boundary at the downstream most position and at a small range lines drawn, the spray angle was measured by selecting of discharge pressures, the actual spray angle is very the AutoCAD command for angular dimensioning.
low. The reason could be that the sprays were not fully developed at those pressures.
Another interesting observation is that the gradients From this experiment a set of 108 data were obtained of the curves in Figures 6, 7 and 8 become relatively from the use of nine atomizers at three horizontal- positions and at four pressure levels. The four discharge pressures were 0.5, 1.0, 1.5 and 2.0 MPa. Each data set was obtained by averaging three angle measurements taken from three images captured by the video camera.
The data, which were grouped by nominal angles, were then plotted on graphs of angle (measured) versus pressure. Figures 6, 7 and 8 show the relationship between the atomizer pressure and the resulting spray angles, as well as the horizontal mounting position.
Since each chart is categorized by the same nominal spray angle, nine curves are displayed together in every Figure 6.
Spray angles at various positions and pressure.
Nominal angle of 40°.
From the results shown in Figures 6, 7 and 8, it is clear that there are differences in the spray angles as the horizontal mounting position is varied. The changes in the spray angles are however small. It was also found that for most cases the farther downstream the nozzle is mounted, the wider the resulted actual spray becomes. However, exceptions occur in the cases of atomizers 0.4-80 and 0.6-80, where the spray angles become narrower when operating at higher discharge Figure 7.
Spray angles at various positions and pressure.
From the graphs it is also obvious that the changes of Nominal angle of 60°.
the atomizer horizontal-positions cause a relatively smaller variation in the measured spray angle for the cases of low nominal spray angle. This is clearly shown as a narrow band of curves in Figure 6. For example, in the case of nominal spray angle of 40°, the variationsof spray angle are only around ± 2.5°. Nevertheless thevariations are relatively larger for atomizers with higher nominal spray angle, where the measured spray angles could have a variance of ±10°. This shows that the effectof the atomizer horizontal-position is less significant for the case of narrow nominal spray angles, but is more Figure 8. Spray angles at various positions and pressure.
obvious for wide-angle nominal sprays. Exceptions Nominal angle of 80°.
PLATFORM VOLUME THREE NUMBER ONE JANUARY - JUNE 2003

A simple (ish) guide to the Psychoactive Substances Bill Date: 15/12/2015 What is it?: A Bill that, if it becomes law, will make it an offence to produce, supply or offer to supply any psychoactive substance with the exemption of nicotine, alcohol, caffeine and medicinal products.1,2 The main intention of the Bill is to shut down shops and websites that