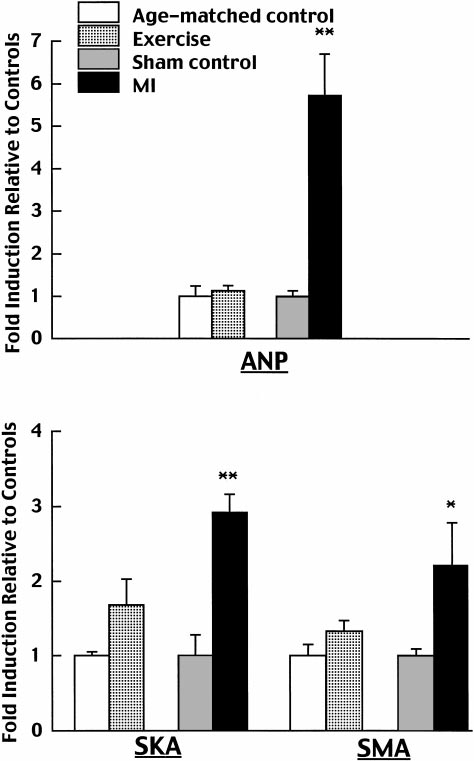 CARDIAC EFFECTS OF EXERCISE TRAINING Table 2. Effects of exercise training vs. MI on cardiac stroke volume in healthy humans and pigs (7, 48, 59).
gene expression However, our finding of increased resting cardiac indexin exercise-trained rats is not in agreement with the observation that there is no significant increase in Natriuretic factors resting cardiac index after exercise training in humans Atrial natriuretic factor and pigs. This discrepancy may be due mainly to the change in resting heart rate after exercise training.
␣-Cardiac actin Humans receiving exercise training exhibit bradycar- ␣-Skeletal actin dia at rest that offsets the increase in resting stroke ␣-Smooth muscle actin volume, leading to an insignificant change in cardiac ␣-Myosin heavy chain output or cardiac index at rest (7, 48). In pigs, exercise ␤-Myosin heavy chain training tends to reduce resting heart rate, which is Myosin light chain 2 associated with a tendency to increase resting cardiac Sarco(endo)plasmic reticulum Ca2⫹-ATPase output (59). In the present study, however, resting heart rate did not change after exercise training in Extracellular matrix conscious rats, which is consistent with previous re- ports (8, 11, 24, 31, 33–35, 62) by the majority of other investigators who observed little or no change in rest- n ⫽ 5 rats in each exercise and age-matched group, and n ⫽ 4 rats in each myocardial infarction (MI) and sham group. Results areas compared with the respective control: NS, no significant change; 1, significant increase (P ⬍ 0.05); and 11, very significant increase(P ⬍ 0.01).
the physiological load versus pathological load. Third,myocardial apoptosis was detected in rats 4 days aftermyocardial infarction but not in the exercise-trainedanimals at 4 days, 10 days, and 13 wk. This is the firstdemonstration that myocardial adaptation to exercisetraining was not associated with cardiac apoptosis.
In the present study, animals receiving exercise training exhibited a significant enhancement in car-diac index and stroke volume index at rest in theconscious state compared with both age-matched andBW-matched sedentary controls. The improvement incardiac function was associated with a reduction insystemic vascular resistance. The decrease in afterloadmay contribute to the enhanced cardiac function byreducing the impedance of LV ejection. Recent studies(46, 54) in dogs suggest that exercise training is asso-ciated with an increase in nitric oxide formation thatmay mediate endothelium-dependent peripheral vaso-dilation. In addition, another mechanism for enhancedcardiac function observed in exercise-trained ratsmight relate to an increase in myocardial contractility.
It has been reported that exercise training increasescontractile performance of rat hearts in vitro (5, 20, 42,43, 51). A study (51) on the effect of exercise training onexcitation-contraction coupling in the rat myocardiumdemonstrated that treadmill exercise enhances myo-cardial performance by increasing Ca2⫹ availability tothe contractile element. A further study is needed todetermine the effect of exercise training on myocardialcontractility in conscious rats, because it was not fea- Fig. 2. Effects of exercise training versus myocardial infarction (MI) sible for us to use a high-fidelity Millar catheter with a on cardiac gene expression of atrial natriuretic factor (ANF), ␣-skel- pressure transducer at the tip to obtain these measure- etal actin (SKA), and ␣-smooth muscle actin (SMA). Expression data ments in the conscious state.
were first normalized by dividing all values in a particular compar- The present study demonstrated a significant in- ison by the average expression in the corresponding control group, crease in stroke volume index at rest in conscious rats thus forcing the control average to be 1. Means ⫾ SE of thesenormalized data are displayed. *P ⬍ 0.05 and **P ⬍ 0.01 compared by exercise training. This is consistent with the finding with the respective control; n ⫽ 5 rats in each exercise and age- that exercise training significantly augments resting matched group, and n ⫽ 4 rats in each MI and sham group. 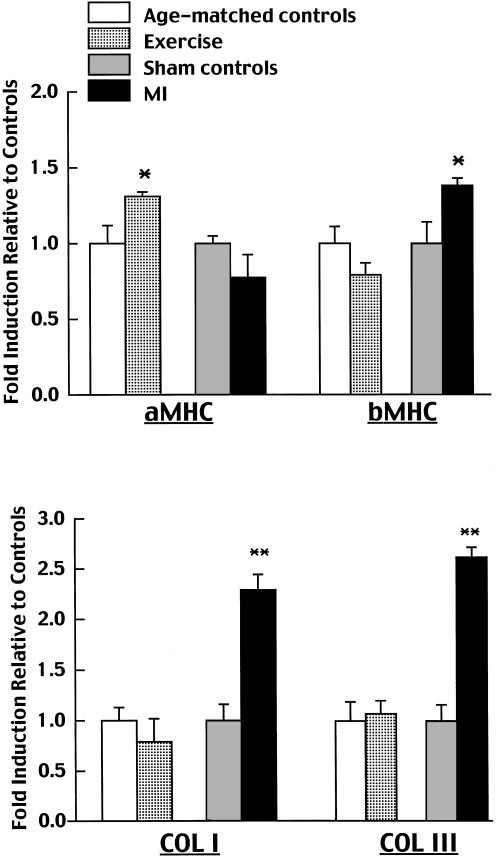