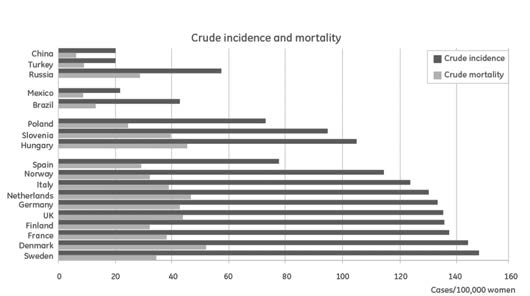 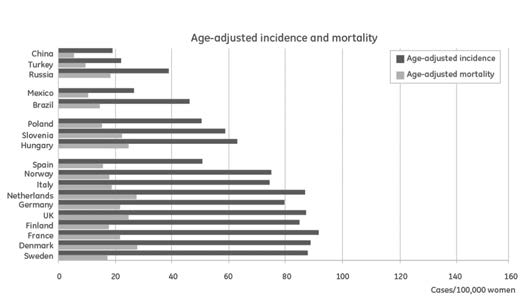 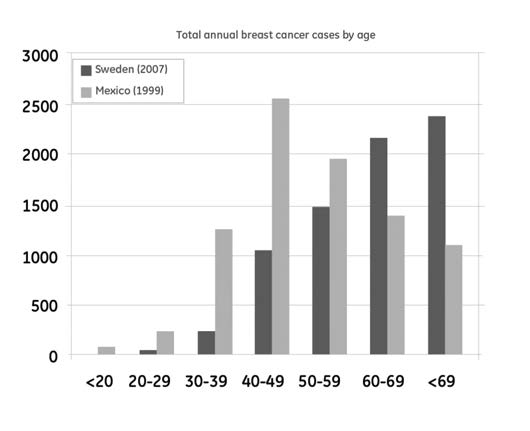 i.e. women diagnosed with breast cancer would die from something Figures 1a and 1b show incidence and mortality, both crude and age- else, the ratio should be zero, and if all die from breast cancer, the ratio adjusted, for a selection of countries. As can be seen when comparing is 1.0. The ratio of mortality to incidence is 0.24 in more developed figures, in Mexico, Brazil, and Turkey, the crude incidence is lower than regions, and 0.40 in less developed regions. The differences are large the age-adjusted incidence since these countries have relatively young with a ratio of 0.20 in countries such as Sweden for example, and a populations. In these countries the burden of breast cancer is expected ratio of 0.60 in parts of Africa and Melanesia. This difference is mainly to increase rapidly with increasing life expectancy and life style explained by differences in the stage of the tumour at diagnosis, which changes. For example, the total number of reported cases in Mexico reflects the presence of screening programs as well as education and in 1999 was 10,000 compared to 7,000 in Sweden in 2007, although public awareness. Well organized breast cancer care is also a key Mexico has a population 10 times as large as the Swedish population. Figure 2 (below), illustrates the age distribution across the total number North America has an age adjusted incidence and mortality of 83.5 of breast cancer cases in Mexico and Sweden respectively. In Mexico, and 16.7 respectively which gives a mortality incidence ratio of 0.20, the average age at diagnosis of breast cancer is approximately 50 similar to the countries in Western Europe. A closer look at statistics years while the average age at diagnosis in Sweden is 60 years due to from the US, reveals large differences between segments of the the younger population on average in Mexico compared to Sweden [5, population. There are ethnic differences with a higher rate of breast 6]. In both countries, the majority of women are under 65 years when cancer and an inferior outcome in African American women compared they are first affected by breast cancer, which contributes to the large to white. On the other hand the incidence in Asian American women health and economic burden of the disease.
and in Hispanic/ Latina women is lower than that among white and African American women (2).
Figure 2a Breast cancer cases per age group in Mexico and Sweden.
Source (4).

Figure 1a and 1b. Source (4).
Prevention and the economic burden of breast cancer 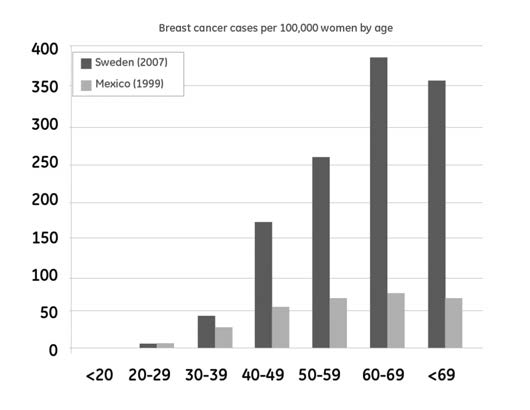 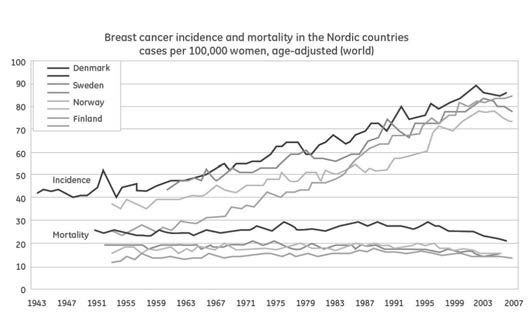 A barrier to the estimation of global breast cancer incidence is the limited data availability in many countries. Incidence figures in many countries are based on data from small geographic areas that are pooled and extrapolated to represent national data. This is not only the case in most developing countries; the majority of the European countries do not have a 100% national coverage of cancer registration. The Nordic countries are exceptions and Denmark was the first of the countries to establish a national cancer registry in 1942, and other Nordic countries followed with registration on a national level in the 1950s. (10, 11). Figure 3 presents the breast cancer incidence and mortality trends over the last 60 years from the Nordic registries (12).
Figure 2b shows the huge difference in the incidence of breast cancer
at different ages in Sweden and Mexico. Source (4).

China currently has the lowest age-adjusted incidence of the study countries, but one may expect that the fundamental changes in reproductive patterns in China brought about by the implementation in the 1970s of the one-child policy, as well as current lifestyle changes in China caused by rapid economic growth, will potentially lead to dramatically increased rates of breast cancer in Chinese women. Such trends can already be seen in the middle-aged population in urban areas of China, where a 20–30% increase in breast cancer incidence has been documented over the past decade, although part of the increase may also be due to earlier diagnosis and better diagnostic Figure 3 Breast cancer incidence and mortality rates in the Nordic
methods, such as the introduction of mammography (7). countries since the 1950s. Source (4).
A review of breast cancer incidence and mortality in 9 countries in The main picture is one of increasing incidence, and since mid 1990s a the Middle East (8) showed that incidence rates are comparatively declining mortality. Incidence rates seem to have been stable or fallen low, with Lebanon as an exception, which partly can be explained by slightly during the last part of the period. Still, in countries like Sweden underreporting. Incidence rates are increasing, and rates also vary there has been an increased incidence over the last 5 years (see figure within countries between different parts of the population. While 4) (overleaf). This increase is at present difficult to explain, especially progress is made in terms of early detection, many cancers are since the use of post-menopausal hormone therapy has declined diagnosed at a late stage.
significantly over the last decade.
The incidence of breast cancer is low in India, but rising. Due to low awareness of the disease, and absence of screening programs, the majority of breast cancers are diagnosed in a rather late stage (9). Prevention and the economic burden of breast cancer 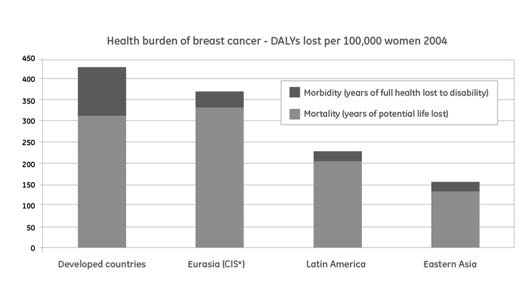 US and Canada show a similar pattern to the Nordic countries, with reduced incidence and mortality since the early 2000s. For Asian countries, including Japan, incidence is increasing rapidly. (76).
Disability- adjusted life years (DALYs)