Luteinizing hormone reduces the activity of the npr2 guanylyl cyclase in mouse ovarian follicles, contributing to the cyclic gmp decrease that promotes resumption of meiosis in oocytes 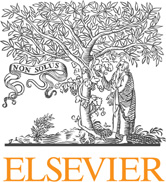 Contents lists available at Developmental Biology journal homepage: Luteinizing hormone reduces the activity of the NPR2 guanylyl cyclasein mouse ovarian follicles, contributing to the cyclic GMP decrease thatpromotes resumption of meiosis in oocytes Jerid W. Robinson ,1, Meijia Zhang , Leia C. Shuhaibar , Rachael P. Norris , Andreas Geerts Frank Wunder , John J. Eppig , Lincoln R. Potter nn, Laurinda A. Jaffe n a Department of Pharmacology, University of Minnesota, Minneapolis, MN, USAb State Key Laboratory of Agro-biotechnology, College of Biological Sciences, China Agricultural University, Beijing, People's Republic of Chinac Department of Cell Biology, University of Connecticut Health Center, Farmington, CT, USAd Bayer Pharma AG, Pharma Research Center, Wuppertal, Germanye The Jackson Laboratory, Bar Harbor, ME, USAf Department of Biochemistry, Molecular Biology, and Biophysics, University of Minnesota, Minneapolis, MN, USA In preovulatory ovarian follicles of mice, meiotic prophase arrest in the oocyte is maintained by cyclic Received 8 March 2012 GMP from the surrounding granulosa cells that diffuses into the oocyte through gap junctions. The Received in revised form cGMP is synthesized in the granulosa cells by the transmembrane guanylyl cyclase natriuretic peptide receptor 2 (NPR2) in response to the agonist C-type natriuretic peptide (CNP). In response to luteinizing Accepted 12 April 2012 hormone (LH), cGMP in the granulosa cells decreases, and as a consequence, oocyte cGMP decreases Available online 21 April 2012 and meiosis resumes. Here we report that within 20 min, LH treatment results in decreased guanylyl cyclase activity of NPR2, as determined in the presence of a maximally activating concentration of CNP.
This occurs by a process that does not reduce the amount of NPR2 protein. We also show that by a slower process, ﬁrst detected at 2 h, LH decreases the amount of CNP available to bind to the receptor.
Mouse ovarian follicle Both of these LH actions contribute to decreasing cGMP in the follicle, thus signaling meiotic Luteinizing hormoneGuanylyl cyclase resumption in the oocyte.
& 2012 Elsevier Inc. All rights reserved.
with the transition from prophase to metaphase, marked by thebreakdown of the nuclear envelope about 2 h after LH exposure.
Mammalian oocytes are maintained in meiotic prophase for However, other events of the prophase-to-metaphase transition prolonged periods. During prophase arrest, the oocyte is located in occur before nuclear envelope breakdown: microtubule organizing a follicle in which it is surrounded by granulosa cells ((A)). As centers assemble (, chromatin condenses the follicle grows to its full size ( 400–500 mm in mice), the oocyte , and cell cycle regulatory proteins acquires the ability to resume meiosis, but due to inhibitory signals undergo changes in activity and localization ( from the granulosa cells, the oocyte remains in prophase Recent studies of the mouse ovary have shown that a key . Then during each reproductive inhibitory substance for maintaining prophase arrest is cGMP, cycle, luteinizing hormone (LH) from the pituitary acts on the which diffuses from the granulosa cells into the oocyte through granulosa cells of the fully grown follicle to cause the oocyte to gap junctions ). In the mature into a fertilizable egg and be ovulated. This process begins oocyte, cGMP inhibits the cAMP phosphodiesterase PDE3A, andthus prevents the degradation of cAMP. Elevated cAMP activatesprotein kinase A, which acts through a complex of mechanisms to n Corresponding author. Fax: þ1 860 679 1269.
nn inhibit the activity of the CDK1-cyclin B kinase and thus to inhibit the prophase-to-metaphase transition ( E-mail addresses: If cGMP in a follicle-enclosed oocyte is experimen- tally decreased, by injection of a cGMP-speciﬁc phosphodiester- ase, cAMP is decreased, and as a consequence meiosis resumes Contributed equally to this work.
0012-1606/$ - see front matter & 2012 Elsevier Inc. All rights reserved. 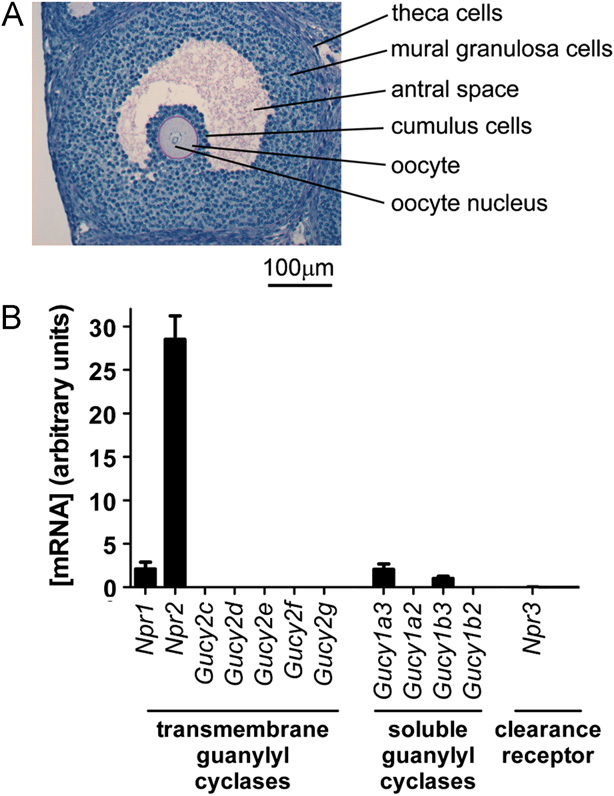 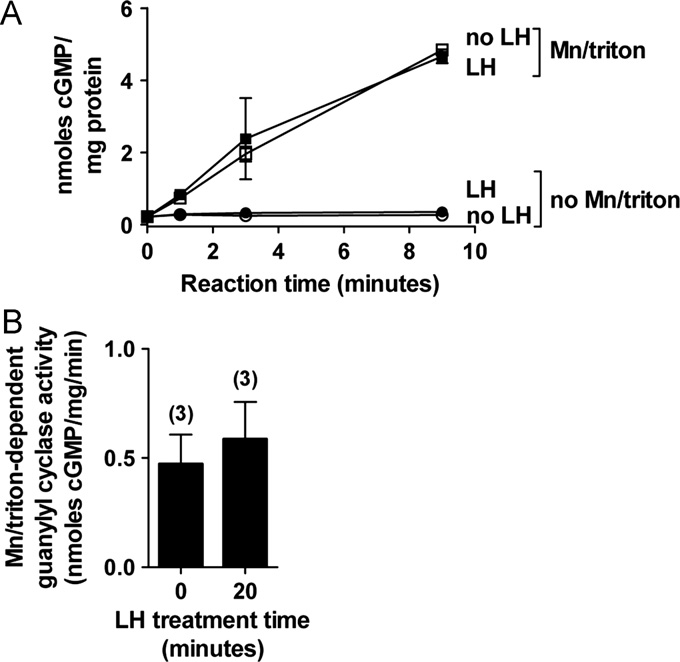 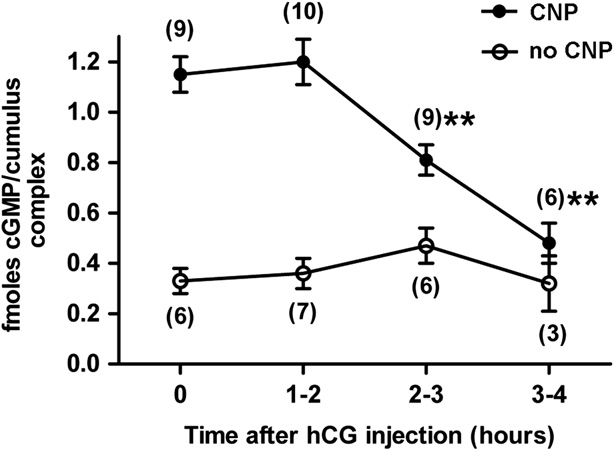 J.W. Robinson et al. / Developmental Biology 366 (2012) 308–316 measured their cGMP content. hCG is often used instead of LH,since both hormones act on the same receptor. 30 nM CNP wasused because this is approximately the minimum concentrationneeded to prevent spontaneous meiotic resumption in isolatedcumulus-oocyte complexes (). Under theseexperimental conditions, measurements of a change in cellularcGMP content in response to LH receptor stimulation couldindicate a change in guanylyl cyclase activity, or a change incGMP phosphodiesterase activity, or a change in cGMP efﬂux.
However, by measuring the effect of LH receptor stimulation oncGMP content in the presence and absence of CNP, we were ableto distinguish between these possibilities.
Without injection of the mice with hCG, addition of 30 nM CNP to cumulus-oocyte complexes elevated the cGMP content of thecumulus cells by 4.1 70.9 times (n¼6). When cumulus-oocytecomplexes were isolated from mice at 1 h after hormone injec-tion, and then incubated in the presence of CNP for an additionalhour, the cGMP content of the cumulus cells was the same as thatin cumulus cells from mice without hormone injection However, when the cumulus-oocyte complexes were isolated at2 h after hormone injection, and incubated with CNP until 3 h,cGMP had decreased to 70% of values obtained without hormonetreatment ). With isolation of the complexes at 3 h,followed by a CNP incubation and measurement at 4 h, cGMP Fig. 3. The LH-induced decrease in NPR2 activity occurs without a corresponding had decreased to 42% decrease in NPR2 protein. (A) Guanylyl cyclase activity of crude membrane In the absence of CNP, the cGMP content of the cumulus cells fractions prepared from follicles treated with or without LH for 20 min wasmeasured with or without 1% Triton X-100 and 5 mM MnCl2, to maximally was low, as expected for this in vitro condition in which NPR2 activate guanylyl cyclase. Values indicate the mean 7range of duplicate measure- would not be activated. Under this condition, the cGMP content ments for each condition, using one follicle preparation made after LH treatment, was not decreased by LH receptor stimulation ), indicating and another preparation made in parallel but without LH treatment. (B) Combined that LH receptor signaling does not increase cGMP phosphodies- data from 3 experiments like that in A, showing Mn/triton-dependent guanylylcyclase activity of crude membrane fractions from follicles treated with or without terase activity in these cells, or cause an increase in cGMP efﬂux.
LH for 20 min (mean 7s.e.m.). LH did not decrease the Mn/triton-dependent Thus the LH receptor-induced decrease in cumulus cell cGMP guanylyl cyclase activity.
seen in the presence of CNP can be attributed to a decrease incGMP production. These ﬁndings indicate that LH signalingdecreases NPR2 activity in the cumulus cells, but only after 2– Detergent-dependent guanylyl cyclase activity was the same 3 h, versus 20 min in the mural cells. This delay is likely to be a in samples from follicles with or without LH treatment for 20 min consequence of the localization of the LH receptors in separate (Since NPR1 and NPR2 are the only detectable membrane cells (the mural granulosa). As will be discussed below, this guanylyl cyclases in granulosa cells, and since NPR1 is a relatively intercellular signaling is most likely mediated by the release of minor component, these detergent measurements indicate that at EGF-like growth factors from the mural granulosa cells.
20 min, LH does not decrease the amount of NPR2 protein. A The decrease in cGMP production in the cumulus cells could possible cause of the rapid LH-induced decrease in NPR2 activity result from a decrease in the amount of NPR2 protein, or from a is dephosphorylation, which can result from elevation of intra-cellular Ca2 þ and/or activation of protein kinase C ; In the cumulus cells, CNP-dependent cGMP production decreases inresponse to LH receptor stimulation, but more slowly than in themural granulosa cells Because of the direct connection between the cumulus cells and the oocyte, and because of the higher level of Npr2 mRNA in thecumulus cells compared with the mural cells itwas of particular interest to investigate whether LH signals that areinitiated in the mural granulosa cells regulate NPR2 activity in thecumulus cells. As described above, LH receptors are not present inthe cumulus cells, so such regulation would have to involvesignaling between different regions of the follicle.
Due to the small amount of protein that could be obtained, we could not analyze guanylyl cyclase activity in a cumulus cell Fig. 4. In the cumulus cells, CNP-dependent cGMP production decreases in membrane fraction as we did for the more abundant material response to LH receptor stimulation, but more slowly than in the mural granulosa from whole follicles. Instead, we isolated cumulus-oocyte com- cells. Cumulus-oocyte complexes were collected at various times after hCG plexes from ovaries at various times after injection of mice with injection into mice and incubated for one hour with or without 30 nM CNP. Thecumulus cells were separated and cGMP content was measured. Values indicate human chorionic gonadotropin (hCG) to stimulate the LH recep- the mean 7s.e.m. for the number of experiments shown in parentheses. Values for tor, incubated the complexes in the presence or absence of 30 nM 2–3 and 3–4 h post hCG were signiﬁcantly different from the no hCG value CNP for an additional hour, then isolated the cumulus cells and (nnp o0.01). 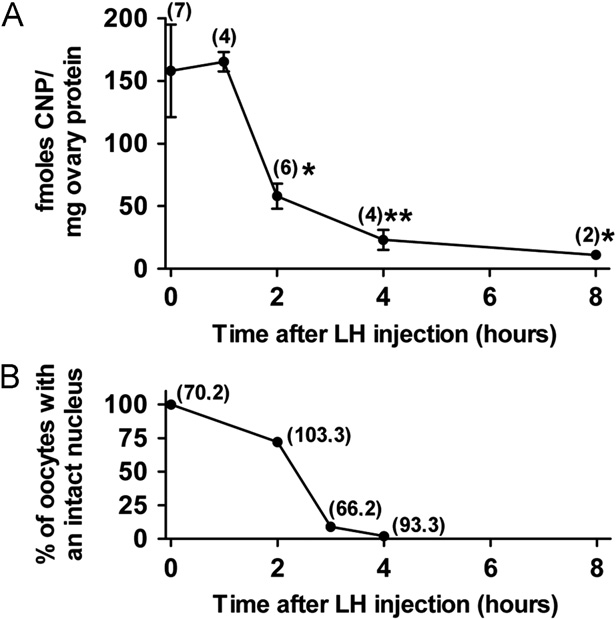 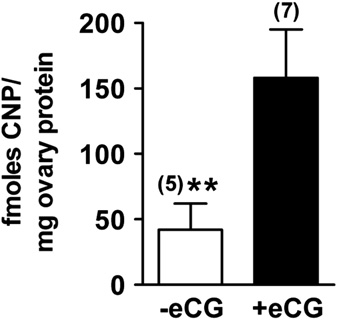