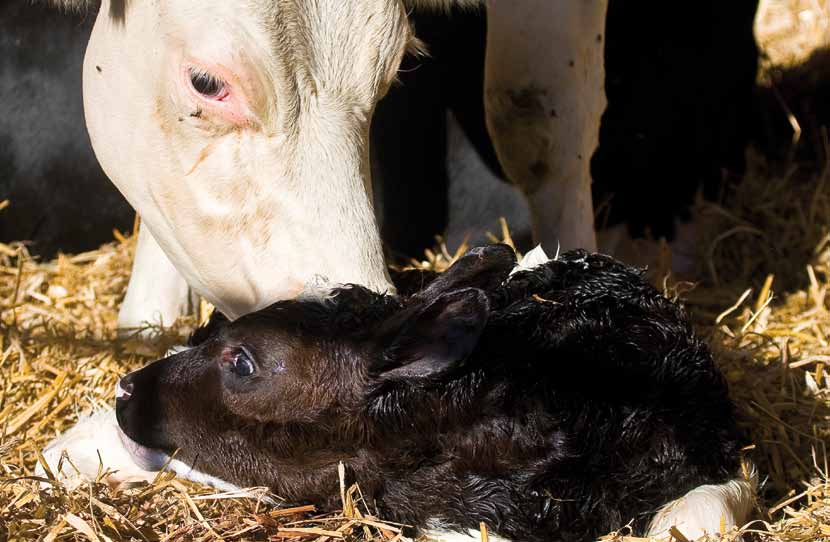 One should be aware that cows are biologically different creatures. 4. Heat detection
5. Follicular cyst alarms
6. Luteal cyst alarms
Some cows will exhibit heat signs where the progesterone Once progesterone concentrations have dropped below 5 ng/ml, In some cows the heat event will be followed by continuing low In some cows in early lactation, the normal regression of the corpus concentration is not very low. This can be seen from figure 5. In the reproduction model will issue a heat alarm. At the same time concentrations of progesterone (happening in an average of 15 % luteum doesn't take place as expected at the end of a heat cycle these cases, Herd Navigator™ will not issue a heat alarm. If the the model will also issue a Likelihood of successful insemination of heats), indicating that there was no ovulation taking place (figure (figure 8). This happens in approximately 5 % of the cows. This heat has been observed, a look at the progesterone curve will (0-100%). This figure has been computed in the model on the basis 7). The majority of these cows will not exhibit clinical signs of the means that the persistent corpus luteum produces high amounts acknowledge the observation. On the other hand, an observed of maximum progesterone concentration in previous cycle, previous follicular cyst, and hence being classified as "silent heat cows" in of progesterone, and the progesterone curve stays high. The heat where there is no drop in progesterone can be rejected. These cycle length, oocyte quality and uterine environment. A likelihood traditional herd management. With Herd Navigator™, these cows will reproduction model expects a new heat 21 days after the latest heat, observations typically occur in cows that were bred in the previous below 10 % is a non-productive heat, and the cow should not be be detected, and a risk value higher than 90 % (default risk value and if progesterone is still high on day 25, the model will issue a heat, and are now pregnant. These cows should not be inseminated.
for an alarm) will appear on day 10 after the heat alarm, allowing luteal cyst alarm.
early diagnosis and treatment (hormone treatment that will cause an Based on the experience from test herds, the insemination shall ovulation). Based on the experience from testing, the heat following Figure 8.
Figure 5.
take place 24-36 hours after the heat alarm. A heat alarm occurring the treatment should not be used for breeding, as the conception after the morning milking should result in an insemination the next rate is very low.
day, and a heat alarm after the evening milking should result in an insemination the day after tomorrow. Figure 6 shows the ideal timing In very high producing animals, naturally occurring low values of Lutein cyst period of events around a heat alarm. progesterone can occur in early lactation, and until the daily milk yield drops to less than 40 kg. The chances of conception in these cows are very low, and we advise that the insemination Standard Operating Figure 6.
Procedure (SOP) for these cows should be not to inseminate until milk yield has dropped.
Herd Navigator™ alarm Figure 7.
Ovulation Bleeding Figure 8. Progesterone curve indicating a luteal cyst (DelPro user interface). There is a heat alarm November 20, 2009, followed by a luteal Figure 5. An example of a progesterone profile showing a high cyst. The cow was treated, and a new heat alarm came December 28, progesterone oestrus. In this case the reproduction model will not issue a followed by an insemination.
heat alarm (Friggens et al, 2008).
Sperm life in female tract The luteal cyst is often accompanied by an inflammation of the uterus 3. Start of progesterone measurements
(endometritis). Therefore, these cows should be rectally examined In most herds commencement of breeding will not start immediately Figure 6. Timing of events during a heat. Note that the Herd Navigator™ and treated with luteolytic hormone (pr after calving. This is especially the case in herds with high heat alarm will take place approximately 12 hours before the onset of the If Herd Navigator™ issues a luteal cyst alarm in cows that were producing cows, where commencement of cyclicity can occur long standing heat, and hence the proper time of insemination will be 24-36 Figure 7. Progesterone curve indicating a follicular cyst (DelPro bred, the cow should be examined for pregnancy at the earliest after calving. Therefore, in the user interface settings of start of hours later (Redrawn from O'Connor, 1993).
user interface), There is a heat alarm January 5th, followed by low convenience. If the cow is pregnant, the pregnancy should be progesterone measurements can be set manually in order to suit progesterone values: The red triangle indicates a heat alarm, and the blue reported to the system, as this will remove the luteal cyst alarm. the needs of the particular herd. We recommend a start time of diamond indicates an insemination.
This will happen from time to time, either because of a mistimed AI 20 days before the end of the Voluntary Waiting Period, in order to or late reporting of the insemination, or due to a slow development have the reproduction model pick up the status of the cows before in progesterone, which makes the reproduction model assume that the first breeding. Further, a Standard Operations Procedure (SOP) the chance of a pregnancy is low. We advise that in case of a luteal can be built in the user interface, allowing for herd specific rules of cyst alarm after breeding, the cow should be manually checked for insemination, based on Days from Calving and actual daily milk yield pregnancy. In the herd management system, filters are available to (see section 10).
sort potentially pregnant cows from luteal cyst cows. 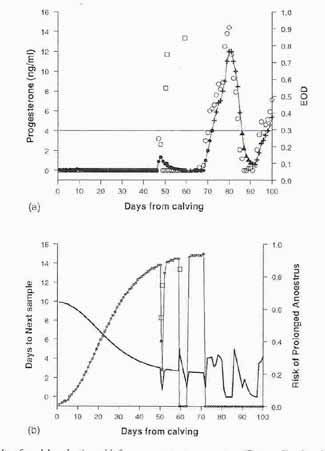 7. Post Partum Anoestrus alarms
8. Pregnancy attentions
10. Standard Operating Procedures (SOPs) for insemination
Dairy cows are expected to resume cyclicity 20-30 days after calving. In cows that were bred, the reproductive model will follow the In the modern dairy herd the voluntary waiting period may depend If the progesterone measurements start at day 40 after calving, the development in progesterone. If at day 30 after breeding the on lactation number and the present milk yield of cows. The first Post Partum Anoestrus alarm will be issued on day 50, allowing progesterone concentration is high, the model will assume that the lactation curve is very flat, which makes it less important to breed time for the model to recognize the development in progesterone cow is pregnant, and issue a pregnancy attention.
cows early in lactation. Further, the very high milk yield in early (figure 9). In some cases progesterone concentration might be low The system will now follow the cow for additional 25 days to lactation is compromising normal ovarial function. Therefore, many in the first measurement days because the cow is in the middle of a check for pregnancy. During this period, 95 % of all cases of early Herd Navigator™ users chose to develop SOPs that takes into heat period, and hence the alarm would be inappropriate. embryonic death and abortions will have taken place, and the cow is consideration these factors. In the user interface one can develop most certainly pregnant (Forar et al., 1996).
SOPs suited for the herd policies for breeding. In case a heat alarm doesn't meet the criteria for an insemination it will be shown, but Figure 9.
If the user suspects or observes an abortion after this time, and the there will be no "insemination" instruction with the alarm. In figure 10 cow is still in the measurement window (typically 40-240 days after is shown a typical example of an insemination SOP.
calving), the system will restart progesterone measurements on the cow, in order to prepare for a rebreeding.
Figure 10.
9. Early Embryonic Loss/Abortion alarms
In some cases (10-20 %) a pregnant cow will loose the embryo
and revert to heat. The majority of these events happens around
day 30 in pregnancy and can be caused by a number of factors, including mistimed insemination and a no-viable foetus. In traditional reproductive management these events will be classified as "prolonged heat cycles", i.e. heats in the period 25-35 days since the Figure 9. An example of a Post Partum Anoestrus cow. The cow is supposed to commence cyclicity, but still up to 70 days after calving The Herd Navigator™ will detect these events and issue an Early there is no increase in progesterone concentrations. At 70 days after Embryonic Loss or Abortion alarm, in order for the user to know calving the first ovulation took place, and the cow became cyclic.
that the cow was pregnant, but lost the foetus. The experience from Herd Navigator™ herds shows that the heat coming right after Likelihood of success such an event should not be used for breeding, as the chances for at Insemination > 40% conception are low (around 15 %).
In case of a Post Partum Anoestrus alarm the cow should be examined at the earliest convenience to determine whether she is Inseminate 24-48 hours after alarm not cycling or to determine if a follicular cyst is causing the alarm. In case of a true Post Partum Anoestrus very little can be done except waiting for the animal to commence cyclicity, and any attempts to breed the animal upon heat activity is non-productive.
Figure 10. Example of a reproduction SOP. The SOP takes into consideration days in milk and the likelihood of success for insemination. The SOP can be developed in the user interface.
• Eerdenburg, F.J.C.M. 2008. Oestrus detection i n dairy cattle - How to beat a bull. Veterinary Quarterly. Vol. 30, Supp. 1.
• Forar, A.L., J.M. Gay, D.D. Hancock & C.C. Gay. 1996. Fetal loss frequency in ten Holstein dairy herds. Theriogenology, 45, 1505-1513. • Friggens, N.C. & M.G.G. Chagunda. 2005. Prediction of the reproductive status of cattle on the basis of milk progesterone measures: model description. Theriogenology 64, • Friggens, N.C.; M. Bjerring, C. Ridder, S. Højsgaard & T. Larsen. 2008. Improved Detection of Reproductive Status in Dairy Cows Using Milk Progesterone • Measurements. Reprod. Dom. Anim. 43 (Suppl. 2), 113–121.
• Lopez, H., LD Satter and MC Wiltbank. 2004. Relationship between level of milk production and estrous behaviour of lactating dairy cows. Animal Reproduction Sci. • O'Connor, M.L. 1993. Heat Detection and Timing of Insemination for Cattle. Penn State College of Agricultural Sciences. Extension Circular 402, 19 pp. S & M. Trinderup ( 2010): [Delevopment of monitors for digestive and metabolic disorders]. Report from Agrotech A/S, Udkærsvej 15, DK-8200 Århus N., Denmark, 22 pp.
is a registered trademark of Tetra Laval Holdings & Finance S.A. and DeLaval is a registered trade/service mark of DeLaval Holding AB.
The manufacturer reserves the right to make design changes. 53571175-201111