ScbA active sites are similar to FabA/Z Fig. 2. Schematic map of amino acid exchanges made in ScbA. scbA, represented as an open arrow, has two AfsA repeatdomains (filled boxes) and three AgeI sites (vertical black lines). Mutated DNA sites at positions 232–234 (E78A), 718–720(E240A) and 727–729 (R243K) are indicated by vertical black lines. The primers used for mutagenesis are shown by arrows,and the mutated sites are labelled by asterisks.
mutated to yield pTE110 (R243K) (Methods; Figs 1 and 2).
the loss of two molecules of water (see supplementary Figs S1 These constructs were then introduced into the scbA and S2 available with the online version of this paper).
deletion mutant M751 by conjugation, to give strainsM751 : : pTE104, M751 : : pTE106, M751 : : pTE108 and To exclude any possibility that the mutated scbA constructs M751 : : pTE110. The original promoter was retained in all were not being correctly expressed, RT-PCR was conducted, as described in Methods. The expression of hrdB encodingthe major sigma factor for S. coelicolor was readily detectedin all samples (Fig. 3d), while the scbA transcript was All mutated ScbA strains lost the ability to detected in all the samples except M751 : : pSET152, which is produce c-butyrolactones, even though the the scbA deletion mutant with an integrated vector only mutated genes were expressed (Fig. 3d). No amplified products were detected using RNA The ability of the constructed mutants to produce SCB1 c- as a template, which suggests that there was no DNA butyrolactone was tested by bioassay, looking for the ability contamination of the RNA samples (data not shown). This of ethyl acetate extracts isolated from stationary-phase suggests that scbA was expressed in the mutants, and that the cultures of the strains to induce pigmented antibiotic mutations, and not the loss of transcription, led to the loss of production in the indicator strain M145 (as detailed in bioactive c-butyrolactone production.
Methods). The results are presented in Fig. 3(b). Asreported previously, an extract from the positive control To assess the effect of the mutations on growth and strain M751 : : pIJ6147 stimulated pigmentation; however, it antibiotic production, M751 : : pTE104, M751 : : pTE106, needed extracts that were twofold more concentrated than M751 : : pTE108 and M751 : : pTE110 were grown on several that of M145 : : pSET152. Extracts from M751 : : pTE104, different solid media (R2, SMMS, R2YE and MS) in M751 : : pTE106, M751 : : pTE108 and M751 : : pTE110 triplicate, but they showed only slight differences compared showed no antibiotic stimulatory activity, even when with wt : : pSET152 or M751 : : pSET152 (data not shown; using a twofold excess of supernatant extract compared see Discussion). The mutants were also grown on SMM with the positive control (Fig. 3b). This result indicates that liquid media at 30 uC in triplicate, and, after 18 h the amino acid replacements (E78A, E240A and R243K) in incubation, samples were taken at four time points (every these two putative active sites leads to an inability to 2 h) and after 34 h at OD450. The level of antibiotic produce active c-butyrolactones.
production of undecylprodigiosin and actinorhodin wasdifferent at each time point, and no conclusion could be These results were corroborated by analyses of the metabolic made from these results (data not shown). RT-PCR using profiles by HPLC-MS, using a synthetic reference of the undecylprodigiosin-pathway-specific activator RedD, SCB1. As shown in Fig. 3(c), only M145 : : pSET152 and and a representative biosynthesis gene, redQ, the actinor- M751 : : pIJ6147 were capable of producing SCB1, while no hodin-pathway-specific activator actII-ORF4, and a repre- related c-butyrolactones were detected in the mutants. MS sentative biosynthesis gene, actIII, the Cpk pathway-specific revealed the characteristic fragmentation that is initiated with activator CpkO, and a representative biosynthesis gene, N.-H. Hsiao and others 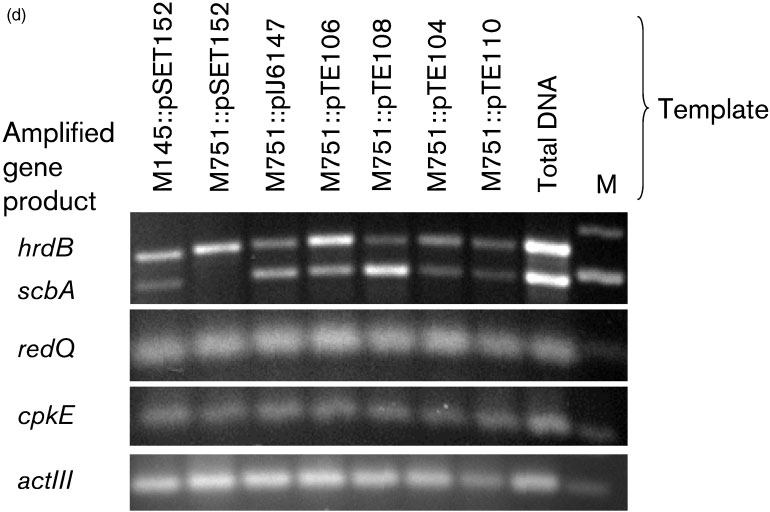