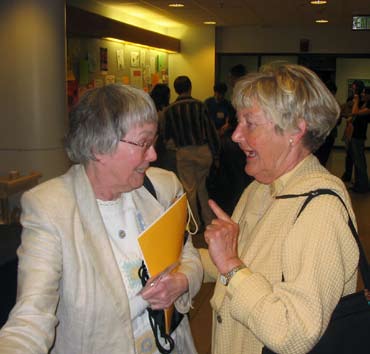 The 78th Annual National Convention took place March 31 through April 2, 2006 in Blacks-burg, Virginia. This convention, hosted by Virginia Tech's Eta Eta Chapter, was attended by twenty-seven chapters from all corners of the country. The kickoff for the weekend took place in the Wallace Atrium where chapters registered and attendees enjoyed ice cream sundaes. Each partici-pant in the convention was given a stylish sack bearing the ever-fashionable Eta Sigma Phi seal. Inside the bag was a handy folder wonderfully decorated with the same, and it held the program and information about the conference. The opening remarks were given by Virginia Tech's very own Pro-fessor of Classics Terry Papillon, who told those attending that he felt the Above, members of bad weather was sent by Zeus because he Eta Eta at Virgina lacked the funds to register. Prof. Papillon Tech preparing to then introduced Virginia Tech Dean welcome delegates to Jerome Niles and other members of the the convention. VT community who graciously welcomed all the travelers to their campus.
Right, Jane Hal of Following these remarks Executive NLE welcomed by Secretary Thomas J. Sienkewicz of Mon- Trustee Chair Sr. mouth College (Gamma Omicron) began the certamen battle of the wits. Each of the chapters stretched their intellectual muscles and flexed them with all their might, but only one team could rise the victor. The story ended with the team called "Oedipus and the Mama's Boys" Continued on page 3 Officers and Trustees
Report of the Chair of the Board
2006–2007
of Trustees at the Eta Sigma Phi
Megas Prytanis Convention, Virginia Tech, Blacksburg
Epsilon Iota (University of Florida) April 2, 2006
scholarship for the Vergilian Summer Megas Hyparchos School came into being. Even the smallest Annual Reports of Chapter Activities
amount from a chapter when combined Gamma Omicron (Monmouth College) We looked at ways of helping the National with other small donations can make a big Convention to keep on schedule by limit- difference. We encourage you to ask your Megas Grammateus ing the report to one page, giving the main local chapter to consider taking on this Thomas George Hendren points of chapter activities, and having Eta Eta (Virginia Tech) delegates be ready to follow the previous report immediately without taking time to Bernice Fox Teaching Scholarship
move to the microphone. We have asked We have asked Mary Pendergraft of Beta Jasmine Merced-Ownbey the Executive Secretary to send out guide- Iota chapter at Wake Forest University to Beta Pi (University of Arkansas) lines to this effect with the announcement chair a committee to judge applications about preparing the chapter report. We for the Bernice Fox scholarship. In the few commend those chapters that had their years since this award has been in place BOARD OF TRUSTEES
reports ready for submission.
the Board of Trustees has served as the decision-making body. We feel that it is Martha Davis (2007) time now to move the judging to a com- Zeta Beta (Temple University) We also commend those chapters that have undertaken outreach beyond the campus and encourage you all to highlight Daniel Levine (2008) your outreach project and describe it in There was an error in the list of trustees Beta Pi (University of Arkansas) more detail in your annual report.
in the convention program. Alden Smith's name should be replaced by David Sick. David Sick (2008) Professor Smith served well as a trustee Beta Psi (Rhodes College) For the past few years ΗΣΦ has tried to until last year when his term ended. increase visibility by having a table at the David Sick is completing the first year of Sister Thérèse Marie Dougherty (2009) APA and CAMWS meetings. We plan to his three-year term. Professor Leon Fitts Beta Kappa (College of Notre Dame look into the possibility of doing the same and Sister Thérèse Dougherty completed at other regional meetings, such as CAAS their terms this year and have requested and CANE. We have also given support that new trustees be appointed. Professor Joseph Garnjobst (2009) to national officers to attend the APA Joe Garnjobst has accepted this appoint- Eta Delta (Hillsdale College) meeting and urge local chapters to add ment to a three-year term. Sister Thérèse their support to this project. We began this Dougherty has agreed to another three- APA table two years ago as an experiment. year term as a trustee but requested that HONORARY TRUSTEES
We agreed to continue this for three more someone else serve as chair. Martha Davis years and then evaluate the project. Next has graciously accepted the position of Gamma Omega (Baylor University) year our National Officers will be invited Chair of the Board of Trustees for the to attend the APA meeting in San Diego.
coming year, at the end of which her term W. W. de Grummond Eta (Florida State University) ΗΣΦ has recently received a donation Lastly, I want to thank all the folks at Eta of about $1900 from Beta Alpha chapter Eta chapter for their hard work in making Beta Theta (Hampden-Sydney College) at the University of South Dakota. The this convention so successful. And I also Trustees decided to deposit this donation want to congratulate our Executive Secre- in the Endowment Fund with the inten- tary, Tom Sienkewicz, on his recent Golden EXECUTIVE SECRETARY AND
EDITOR OF NUNTIUS
tion of working toward the establishment Trowel award for service to the AIA.
of a new scholarship for archaeology. We Thomas J. Sienkewicz hope that during the coming year this Respectfully submitted, Gamma Omicron (Monmouth College) amount can be matched by donations from Sister Thérèse Marie Dougherty local chapters. This is how the Bedrick 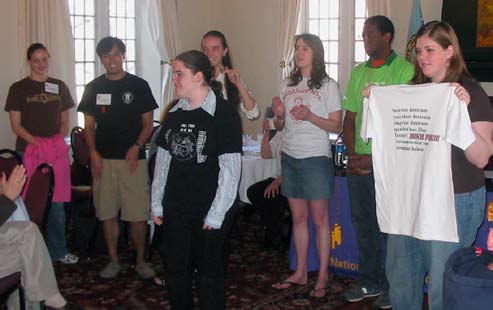 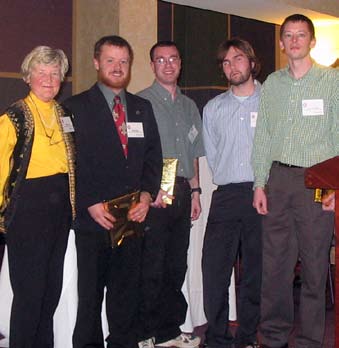 The 78th Annual National Convention (Continued from page 1)
from University of Massachusetts Epsilon
Omicron Chapter beating out the "Bull-
dogs" from the University of Georgia in the
final round and wearing the laurels that
fateful evening in Blacksburg, Virginia.
The following morning all came together in room 1100 of Torgersen Museum for breakfast. This was just a ten-minute walk from the Virginia Tech Inn where most of the visitors were staying, and it was a beautiful walk at that, through the blooming campus and wide-open drillfield. The 78th Annual Business meeting was opened by Dr. Terry Papillon who gave a reading from the Odyssey; after recall-ing the words of Homer, he handed the microphone to the presiding Megale Pry-tanis Karen Kelly from Baylor University (Gamma Omega). The first order of business was the acceptance of the previous year's min-utes. Sharif Said, Megas Grammateus from Mar-quette University (Beta Sigma), presented the minutes from the 77th Convention in North-field, Minnesota, which had been published in the NUNTIUS. The minutes were approved by voice vote. After this Said asked that representatives from Top, the traditional chap- each chapter approach the lectern and ter regalia fashion show present their chapter reports. Delegates and contest. from each chapter then shared their expe-riences for the year and inspired the future Above, the final bitter members with their remarks.
round of the certamen: Dr. Antonios Augoustakis from North vs. South. Baylor University (Gamma Omega) then presented the winners of the 2006 Left, Jane Hal of the Eta Sigma Phi Translation Contest. He National Latin Exam awarding book prizes to the members of the winning certamen team, Thank You
Oedipus and the Mama's Boys from the University Eta Sigma Phi once again thanks the of Massachusetts. Pictured National Latin Exam for contribut- from l. to r. are Jane Hal , ing funds to purchase book prizes for Andy Carrol, Craig the certamen winners at national Anderson, Curt Bel emer, and Chris Lavalette. 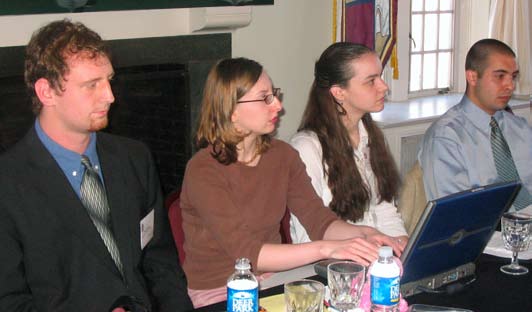 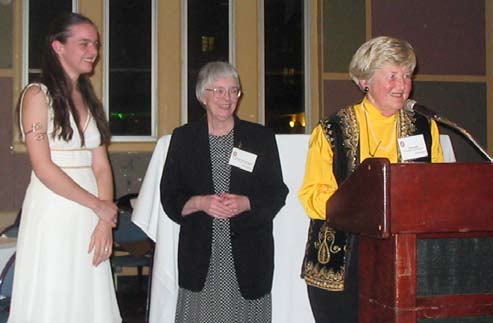