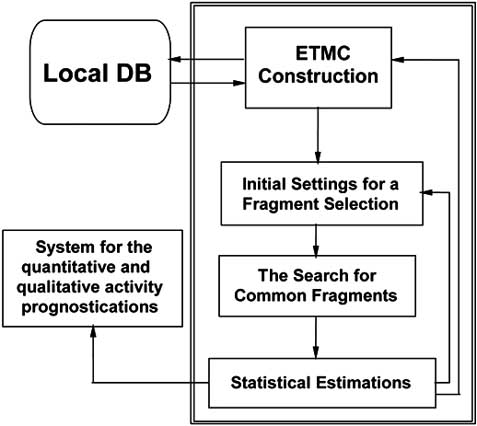 482 Mini-Reviews in Medicinal Chemistry, 2005, Vol. 5, No. 5
Kandemirli et al.
Fig. (2). Common scheme of ETM.
used immediately, if they satisfy some conditions When used together, both types of features represent valuable superimposed by the researcher. At the same time, the information for the design of new compounds with the examination procedure is applied when the researcher wants desired activity A.
to validate the stability of the fragments selected. This isdone by the "leave-one-alone" technique, when allcompounds from the set {Sk NEURAL NETWORK METHOD
A} are tried as templates for matrices' comparison. In contrast to many other methods in Artificial Neural Networks (ANNs) is a group of methods the ETM, this task is fulfilled by the same procedure as the that are increasingly being used in drug design to study one used at the previous step. The features validation is QSAR [27, 28]. This method is able to elucidate structure- obligatory, when a quantitative (functional) model is to be activity relationships and take into account any non-linear developed on the basis of the fragments found (as usually is character of these relationships. Thus, this method can be of the case of indirect methods).
significant interest in 3D QSAR studies.
The concluding step is the development of a set of For the analysis of the data we have used one of the most decision rules for the activity (A) prediction. In the ETM, well-known neural networks - the feed forward neural this set is represented by a set of molecular substructures networks (FFNNs) trained with the back propagation (represented by submatrices of ETMCs, or by ETSA, for algorithm [29, 30]. The architecture of the ANNS was short) and some numerical data that are important for consisted of three-layers with five neurons in one hidden recognising new molecular structures possessing the activity layer. One single output node was used to code activities of A. When having such set, the given property P prediction AChE inhibitors. The bias neuron was presented on the consists in the search of congruent subgraphs in all input and on the hidden layer. At least M=200 independent abovementioned structures Si. Again, this procedure follows FFNN were trained to analyse each set of variables. The the same steps as the procedures for features selection and predicted values of each analysed case were averaged over all validation, but its initial settings ∆1-3 and CP are those
M network predictions and the means were used to calculate calculated at the first step, and templates are exactly the statistical coefficients with targets. The other details of the features selected.
algorithm can be found elsewhere [31, 32].
When successfully found, a feature SjA elucidates core The avoidance of overfitting/overtraining has been shown mechanisms of the receptor-ligand interactions. But a similar to be an important factor for the improvement of predictive study can be carried out when the user wishes to find ‘breaks ability and correct selection of variables in the feed forward of activity', which indirectly characterise sterically neural networks [31]. The Early Stopping over Ensemble inaccessible and/or electronically forbidden regions of (ESE) technique was used in the current study to accomplish receptors. They are fragments that are common to all this. A detailed description of ESE can be found in [31, 32].
compounds from {SlNA, for all l} and cannot be found in the In brief, each analysed artificial neural network ensemble compounds from {SkA, for all k}. (It is noteworthy that for a (ANNE) was composed of M=200 networks. The values break of activity SjNA the criterion CNA looks similar.)
calculated for analysed cases were averaged over all M neural 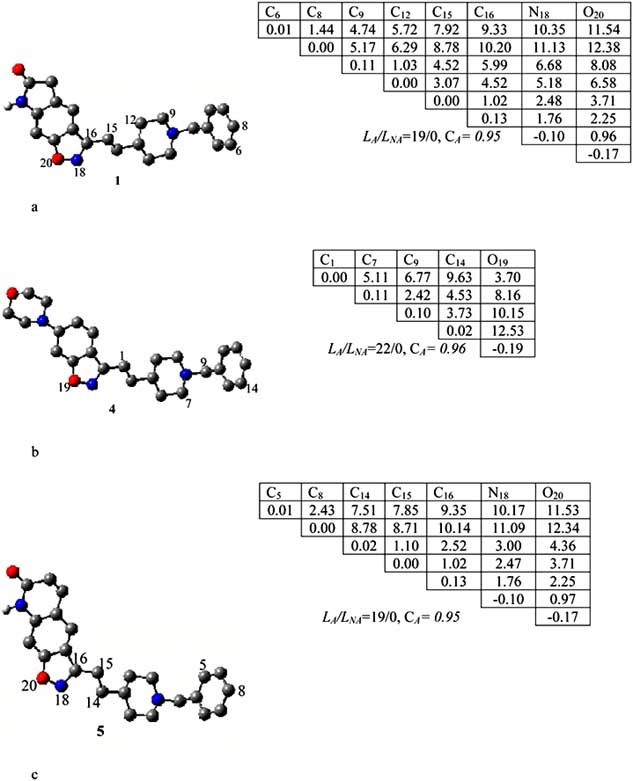 Mini-Reviews in Medicinal Chemistry, 2005, Vol. 5, No. 5 483
Fig. (3). The P1(a), P2(b) and P3(c) pharmacophores found relative to active molecules 1, 4 and 5 respectively.
networks, and their means were used for computing last improvement of root–mean-square error in the early statistical coefficients with targets. We used a subdivision of stopping point. The root–mean-square error E was computed the initial training set into two equal learning/validation as a criterion of network learning to determine the stop subsets. The first set was used to train the neural network points of a training procedure. The quality of the model was while the second one was used to monitor the training tested by the leave-one-out cross-validation q2 value defined process measured by root mean square error. An early stopping point determined as a best fit of a network to the q2 = (SD-press)/SD; validation set was used to stop the neural network learning.
Thus, statistical parameters calculated at the early stopping Introduced by Cramer et al. [33]. Here SD represents the point were used. The training was terminated by limiting variance of a target value relative to its mean and 'press' is the network run to 10, 000 epochs (total number of epochs) the average squared errors of predicted values obtained from or after 2, 000 epochs (local number of epochs) following the leave-one-out (LOO) procedure. 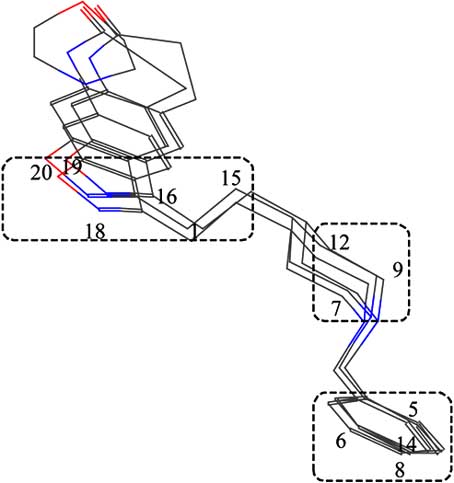 484 Mini-Reviews in Medicinal Chemistry, 2005, Vol. 5, No. 5
Kandemirli et al.
The LOO cross-validation procedure was used to The pharmacophore was found in 19 of 31 active supervise the predictive performance of ANN.
compounds, and it was not found in inactive compounds at
all. Thus, the probability CA of its realisation in the active
It has been shown that pruning algorithms [34, 35] may class is about 0.95. As seen from the pharmacophore's be used to optimise the number of input parameters for structure, it consists of the C6, C8 atoms of the phenyl, and ANNs learning and to select the most significant ones.
C9, C12, C15, C16, N18, O20 atoms.
These algorithms operate in a manner similar to step-wisemultiple regression analysis and exclude on each step one Pharmacophore P2 was calculated relative to the template
input parameter that was estimated to be non-significant.
molecule 4 in a similar way as for P1 (see Fig. 3b). The P2
The pruning algorithms were used in the current study to was found in 22 active compounds and it was not found in determine significant parameters of input data points of the inactive compounds at all (correspondingly, the probability analysed molecules as described in references [34, 35].
of its appearance is estimated as 0.96). The P2 includes five
atoms in total, as seen from (Fig. 3b).
RESULTS AND DISCUSSION
Pharmacophore P3 was calculated by taking compound 5
as the template for comparison. The P3 includes seven
According to the common scheme of the ETM, atoms, which are carbon atoms C5, C8, of the phenyl cycle conformational analysis and quantum chemistry calculations and two carbons, C14, C15, C16, N18, O20. They belong to were carried out for all compounds in the series under study.
different parts of the template molecule, and, as seen from As the result of the conformational analysis, conformational (Fig. 3c), they represent the most important two parts of all
structures with global minimum of their energies are to be active molecules.
In Figure 4, the superimposition of three template
compounds that correspond to the calculated pharmacophores Pharmacophores and Anti-Pharmacophores Calculation
P1 – P3 is shown. In 3D space three separate regions can beindicated for each active molecule, where atoms of the three Electronic and steric parameters responsible for the pharmacophores can be found.
activity form a matrix, which is a submatrix of thecorresponding template ETMC. As it was already said, such These regions are shown in the (Fig. 4) by dotted lines.
submatrix is called the electron-topological submatrix of One of them is formed by the atoms belonging to the phenyl activity (ETSA). So, the activity feature (or pharmacophore) ring, while the other two are formed by the atoms that P1 was calculated by taking molecule 1 as template
represent the heterocyclic rings. It is quite possible that the compound (∆1= ± 0.05, ∆2= ± 0.10). The P1 is shown in
atoms from these regions play an important role in the (Fig. 3a) along with its ETSAP1.
Fig. (4). Template compounds 1, 4 and 5 alignment by superposing the P1, P2 and P3 features. 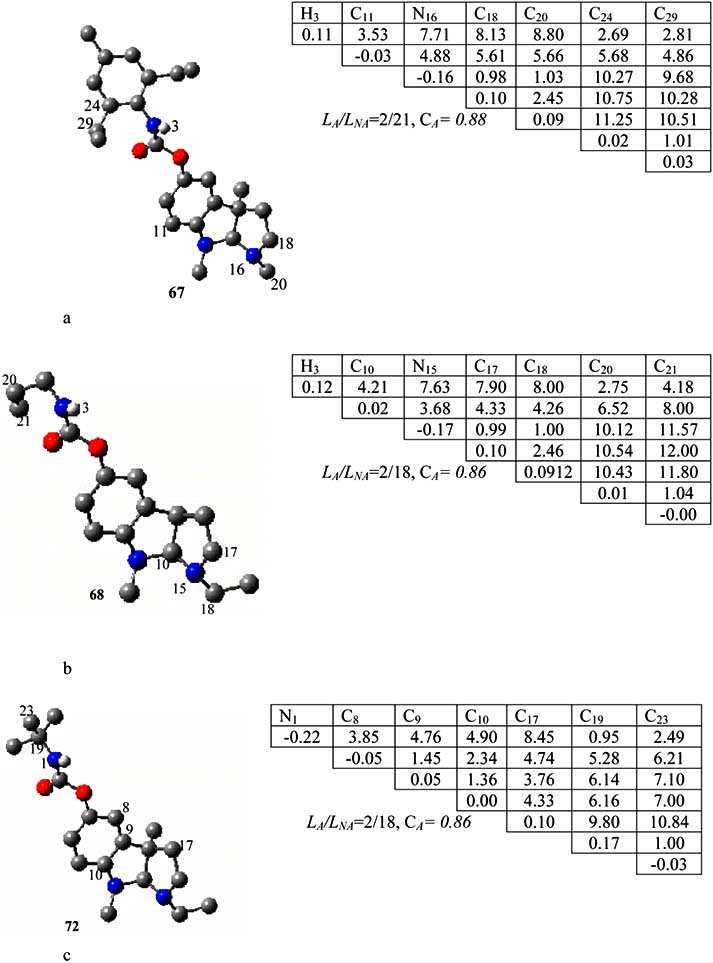 Mini-Reviews in Medicinal Chemistry, 2005, Vol. 5, No. 5 485
Fig. (5). The AP1(a), AP2(b) and AP3(c) anti-pharmacophore found relative to inactive molecules 67, 68 and 72 respectively.
When building a system for the activity prediction, those interatomic 3D distances for the atoms can be seen from its fragments of molecule are also to be taken into account, ETSCAP1. 3D distances used at place of some off-diagonal which are capable of deactivating an active structure (‘breaks elements in the ETSAAP1 are close enough. AP1 feature was
of activity', or anti-pharmacophores). An anti-pharmacophore found in 21of 29 inactive compounds. It was found 2 in AP1 was found from template compound 67 (see Fig. 5a).
active compounds. So, the probability of its realisation AP1 contains seven atoms belonging to different parts of the
(CNA) in this class of compounds is about 0.88.
template molecule 67. These atoms are C3, C11 C16, C18,
Anti-pharmacophore AP2 was calculated from the
C20, C24 and C29. Peculiarities of electronic-topological template compound 68. The atoms C
parameters such as atomic charges, bond multiplicities and 3, C10, C15, C17, C18,

Get inside to spot the BIG moves in SMALL COMPANIES SMALL "This year was our fiscal cliff. FY14 is when we realise all the hard work from our stategy. " Richard Pang, CEO ISS Group Welcome back to another year of Under the Radar. SHARE RESEARCH Tip 1. p2 mAynE pHARmA (myx)