ARTICLE IN PRESS Basic Research—Technology
Comparative Evaluation of Antimicrobial Efficacy ofSodium Hypochlorite, MTAD, and Tetraclean AgainstEnterococcus faecalis Biofilm Luciano Giardino, MD, DDS,* Emanule Ambu, MD, DDS,† Enrico Savoldi, MD, DDS,*Roberto Rimondini, PhD, MS,‡ Clara Cassanelli, MD,§ and Eugenio A. Debbia, MD§ AbstractThe aim of this study was to compare the antimicrobialefficacy of 5.25% NaOCl, BioPure MTAD (Dentsply the major causative factors associated with endodontic treatment failures In Tulsa Dental, Johnson City, TN), and Tetraclean (Ogna infected and necrotic root canal systems, bacteria grow mostly in sessile biofilms, Laboratori Farmaceutici, Milano, Italy) against Entero- aggregates, and coaggregates in which they are embedded in an extracellular matrix coccus faecalis biofilm generated on cellulose nitrate material Biofilms are disrupted, and the microbial load is reduced by mechan- membrane filters. After incubation, the membrane fil- ical instrumentation, irrigation with tissue-lytic and microbicidal solutions, and anti- ters were transferred into tubes containing 5 mL of the microbial medicaments in the root canal. Irrigants are used during the endodontic selected antimicrobial solution test agent or NaCl 0.9% treatment to flush out loose debris, to lubricate the dentinal walls, to dissolve organic (positive control) and incubated for 5, 30, and 60 matter in the canal, and to have antimicrobial effects Different concentrations of minutes at 20°C. After each period of time, the test sodium hypochlorite (NaOCl) were used as root canal irrigants in the past 7 decades agents were vortexed for 60 seconds to resuspend the because of its well-known antimicrobial action and its ability to dissolve tissue microorganisms. Ten-fold serial dilutions were gener- Previous studies have shown that instrumentation and antibacterial irrigation with ated in reduced transport fluid. Each dilution was sodium hypochlorite would eliminate bacteria in 50% to 75% of infected root canals at plated onto a brain heart infusion plates. The plates the end of the first treatment session, whereas the remaining root canals contain recov- were then incubated for 48 hours in an aerobic atmo- erable bacteria In their study Nair et al. showed that 88% of root canal– sphere at 37°C and colony-forming units per membrane treated mandibular molars revealed residual infection of mesial roots after instrumen- was calculated. Statistical analysis showed that only tation, irrigation with NaOCl, and obturation in a one-visit treatment. Because of these 5.25% NaOCl can disgregate and remove the biofilm at limitations, a better root canal irrigant is still being searched for.
every time; however, treatment with Tetraclean caused BioPure MTAD (Dentsply Tulsa Dental, Johnson City, TN) has been described as a a high degree of biofilm disgregation in every consid- universal irrigating solution Torabinejad et al. have shown that MTAD is able ered time intervals as compared with MTAD (T5 to safely remove the smear layer and that it is effective against Enterococcus faecalis, p ⬍ 0.05, T30 p ⬍ 0.01, and T60 p ⬍ 0.001). (J Endod and it can also eliminate bacteria in human root canals that had been infected by whole saliva A new irrigant, Tetraclean (Ogna Laboratori Farmaceutici, Milano, Italy),has been developed. It is a mixture of doxycycline hiclate at a lower concentration than MTAD, an acid, and detergents. It is able to eliminate microorganisms and smear layer Biofilm, Enterococcus faecalis, irrigants in dentinal tubules of infected root canals with a final 4-minute rinse. E faecalis hasbeen often isolated from teeth with endodontic failed treatments Consequently,recent laboratory studies have focused on evaluating the effectiveness of root canalirrigants and medicaments against E faecalis. Many of these studies have grown the From the *Department of Periodontology, Dental School, bacterial strains as planktonic cultures (bacteria in suspension) However, plank- University of Brescia, Brescia, Italy; †Department of Endodon- tonic bacteria do not usually comply with the in vivo growth condition found in an tics, Dental School, University of Modena e Reggio Emilia,Modena, Italy; ‡Department of Pharmacology, University of infected tooth in which bacteria grow as a biofilm on the dentinal wall Bacterial Bologna, Bologna, Italy; and §Department of Microbiology, biofilm is made by bacteria in sessile form embedded in a polysaccharide matrix. This Dental School, University of Genova, Genova, Italy.
structure makes it more difficult for drugs to reach bacteria. Therefore, all studies about Address requests for reprints to Dr. Luciano Giardino, the "clinical" action of endodontic irrigants should be conducted with bacteria in Via Marinella 12, 88900 Crotone, Italy. E-mail address: "biofilm form." Up to now, however, very few studies about the action of antimicrobic [email protected]
0099-2399/$0 - see front matter irrigants against biofilm have been published. As a result, recent laboratory studies have Copyright 2007 by the American Association of attempted to evaluate the efficacy of antimicrobial agents used in root canal treatment against E faecalis grown as a biofilm The aim of this study was to assess the antimicrobial efficiency of endodontic irrigants against E faecalis biofilms.
Materials and Methods The methodology used was adapted from Spratt et al. with some modifica- tions. Biofilms of E faecalis strain ATCC 29212 were generated on cellulose nitratemembrane filters. An overnight culture of E faecalis grown in brain heart infusion(BHI) broth (Difco Co; Becton Dickinson, Sparks, MD), adjusted to 0.5 Mc Farland JOE — Volume xx, Number x, Month 2007 Enterococcus faecalis Biofilm 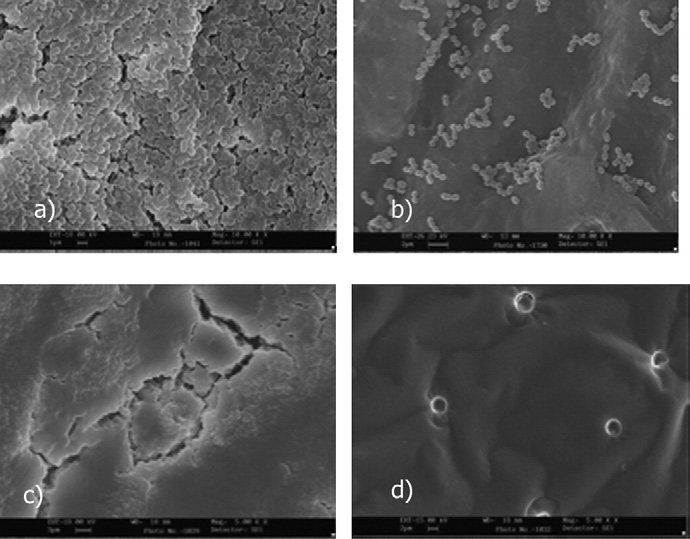 ARTICLE IN PRESS
variances revealed that data were normally distributed (Cochran, Bart-lett test; T5 p ⫽ 0.4, T30 p ⫽ 0.67, and T60 p ⫽ 0.35). Statistical significance was set at p ⬍ 0.05. The overall analysis of variance re-vealed a highly significant either for treatment effect (F[3,8,rsqb] ⫽177.87, p ⬍ 0.00) or for interaction effects (treatment ⫻ time)(F[6,16] ⫽ 5.86, p ⬍ 0.002).
Bonferroni post hoc analysis showed that treatment with Tetra- clean induced an increase in biofilm disgregation in every consideredtime intervals compared with the positive control NaCl 0.9% (T5 p ⬍0.01, T30 p ⬍ 0.001, and T60 p ⬍ 0.001), MTAD (T5 p ⬍ 0.05, T30p ⬍ 0.01, and T60 p ⬍ 0.001), and NAClO 5% (T5 p ⬍ 0.0001, T30p ⬍ 0.00001, and T60 p ⬍ 0.00001).
In any natural environment, bacteria show the tendency to aggre- gate in adherent microbic communities. The biofilm formation ispresent on any surface that comes in contact with natural liquids. Theformation of biofilms follows the same stages starting with theformation of a conditioning film; the adhesion of planktonic bacteria Figure 1. (a) E faecalis biofilm on cellulose nitrate membrane filter after 48 takes place on this surface, and this attachment may be strengthened hours of incubation (original magnification ⫻10,000). (b) E faecalis biofilm through polymer production and the unfolding of cell-surface struc- after 30 minutes of contact with Tetraclean (original magnification ⫻5,000).
tures. In the third stage, the biofilm is already formed, and, in its growth, (c) Undisgregated biofilm after 30 minutes of contact with MTAD (originalmagnification ⫻5,000). (d) Biofim completely removed after 30 minutes of a continuous detachment of bacteria to the planktonic phase is present.
contact with 5.25% NaOCl (original magnification ⫻5,000).
These detached cells serve as a steady source for chronic infection This phenomenon starts after initial adhesion, and the number of bac-teria released is related to the number of bacteria forming the biofilm.
scale (1 ⫻ 108 CFU/mL), was used. An aliquot of 20 ␮L of E faecalis Moreover, the stage of biofilm is a defense of the microbic community was seeded onto 13.0-mm diameter cellulose nitrate membrane filters against host defenses and against antimicrobic agents Central to (0.22-␮m pore diameter; Millipore Corporation, Bedford, MA), which the theme of biofilm control is the use of surfactants, antimicrobial were placed on the surfaces of BHI agar plates. Nine membranes were agents, and preservatives. The microbic communities grown in biofilm used for each plate. Plates containing membranes were then incubated are remarkably difficult to eradicate with antimicrobial agents; bacteria for 48 hours at 37°C in an aerobic atmosphere. The efficiency of the in mature biofilm can resist the action of antibacterial irrigants, but the method for biofilm generation was observed in a pilot study visually and reasons for this resistance are not completely understood. Bacteria in by scanning electron microscopy (SEM) After incubation, biofilm are 2- to 1,000-fold more resistant than the corresponding membrane filters were removed aseptically from the agar plate and bacteria in planktonic form Biofilm bacteria may also show a transferred carefully to avoid any disruption of the biofilm into tubes different phenotype that could increase an enhanced resistance, and containing 5 mL of the selected antimicrobial solution test agent, NaCl this could be because of different metabolic pathways. Biofilm bacteria 0.9% (positive control), and 5.25% NaOCl (negative control) and in- might not express the drug target; they have been found to be more cubated for 5, 30, and 60 minutes at 20°C. After each period of time, the resistant to amoxicillin, doxycycline, and metronidazole.
membrane filters were then carefully transferred aseptically into tubes Furthermore, the "biofilm model"seems to be more realistic than containing 5 mL of neutralizing broth (D/E Neutralizing Broth, Difco the "direct contact method" to test antimicrobic agents. Spratt et al.
Co) for 5 minutes to stop the antimicrobial action of the test agents and used a simple model to evaluate the activity of several irrigants vortexed for 60 seconds to resuspend the microorganisms. Ten-fold against 5 different root canal bacterial isolates. This study reported that serial dilutions were generated in reduced transport fluid. Each dilution sodium hypochlorite is the most effective agent tested.
was plated onto BHI plates. The plates were then incubated for 48 hours In a study published by Sena et al. the capability of different in an aerobic atmosphere at 37°C and colony-forming units (CFU) per irrigants with andwithout agitation against 5 strains of bacteria was membrane were calculated. Controls were exposed to sterile saline forthe same periods. Three replicates were performed for each antimicro-bial agent and control.
The results of this study are shown in 5.25% NaOCl was the only irrigant capable of removing biofilm after only 5 minutes,whereas the same effect was reached by Tetraclean after 60 minutes.
Biopure MTAD was unable to reach this goal at every considered time.
Furthermore, the use of Tetraclean was able to reduce 90% bactericload after 5 minutes and ⬎99.9% after 30 minutes of application. Thebacterial load reduction using Biopure MTAD has not been significantafter 5 minutes, whereas it has been much lower after 30 minutes than Figure 2. Bonferroni post hoc analysis showed that treatment with Tetraclean using Tetraclean or 5.25% NaOCl.
induced an increase in biofilm disgregation in every considered time intervals Statistical analysis was performed by using two-way analysis of compared with the negative control NaCl 0.9% (T5 p ⬍ 0.01, T30 p ⬍ 0.001, and variance followed by Bonferroni post hoc test. A test of homogeneity of T60 p ⬍ 0.001) and MTAD (T5 p ⬍ 0.05, T30 p ⬍ 0.01, and T60 p ⬍ 0.001).
Giardino et al.
JOE — Volume xx, Number x, Month 2007