Inflammatory tinea capitis: a 12â•'year study and a review of the literature

Diagnosis,Therapy and Prophylaxis of Fungal Diseases Inflammatory Tinea capitis: a 12-year study and a review of theliterature Ine s Zaraa,1,2 Abdelmohti Hawilo,1 Amina Aounallah,1 Sondes Trojjet,1 Dalenda El Euch,1Mourad Mokni1,2 and Amel Ben Osman1,21Department of Dermatology, La Rabta Hospital Tunis, Tunisia and 2University of Medicine, El Manar Faculty Tunis, Tunis, Tunisia Inflammatory Tinea capitis (TC) is a rare form of TC. The aim of this study was to reviewepidemiological, clinical and mycological profile of inflammatory TC. We present aretrospective study (1999–2010), enrolled all the cases of inflammatory TC observed ata referral hospital in the northern Tunisia. One hundred and twenty-one patients withinflammatory TC, 83 male patients (68.6%) and 38 female patients (31.4%) wereenrolled. The mean age was about 8 years. A majority of TC (71.9%) were in patientslesser than 10 years of age. Positive family history and contact with animals werenoted in seven and 35 cases respectively. Direct examination was positive in 110 cases(59 ectothrix, 51 endothrix) and positive cultures were obtained in 105 patients (49Trichophyton violaceum, 31 Microsporum canis, 13 Trichophyton interdigitale complex, 12Trichophyton verrucosum). Systemic treatment was carried out in 115 patients withgriseofulvin, in one with terbinafine. A complete recovery was noted in 88 cases; andpersistent alopecia in 28 cases. The inflammatory TC is rare, but more common inrural families. The disease mostly affected male genders (68.6%) and T. violaceumremains the common pathogen of inflammatory TC in northern Tunisia.
Key words: Kerion, Tinea capitis, dermatophytosis, Trichophyton violaceum, Microsporum canis, griseofulvin, NorthTunisia.
inflammatory reaction with sometimes devastating consequences.5–7 The true incidence and prevalence of Tinea capitis (TC) or scalp ringworm is a common inflammatory TC remain unknown in Tunisia and no dermatophyte infection of the scalp in children between large, long-term study of this form of TC has been 3 and 7 years of age.1–3 The epidemiology of TC varies conducted in recent years.
within different geographical areas throughout the The aim of our study was to review the epidemio- world.4 It may occur sporadically or epidemically, and clinical and mycological features of inflammatory TC an increase in its incidence has been noted in many diagnosed in our area and compare the pattern of countries over the last few decades. The presenting infectious agents causing inflammatory TC in our study symptoms vary widely and are mostly mild and tran- to those of previous Tunisian series and other series of sient. A more uncommon and often misdiagnosed the literature.
symptom is inflammatory TC (kerion celsi), a severe Patients and methods Correspondence: Ine s Zaraa, Department of Dermatology, La Rabta,Hospital, Jabbari, Bab Saadoun, Tunis 1007, Tunisia.
This retrospective study was performed in the Depart- Tel.: +21698307425. Fax: +21671569449.
ment of Dermatology of La Rabta Hospital of Tunis, Tunisia. We reviewed all cases of patients with anestablished diagnosis of inflammatory TC observed Submitted for publication 13 September 2011 between January 1999 and December 2010 (12 years).
Revised 6 May 2012Accepted for publication 24 May 2012 Our department is situated in the northern Tunisia. The  2012 Blackwell Verlag GmbH Mycoses, 2013, 56, 110–116 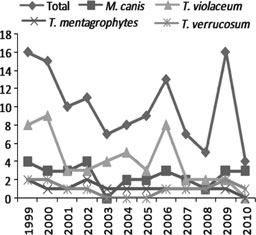 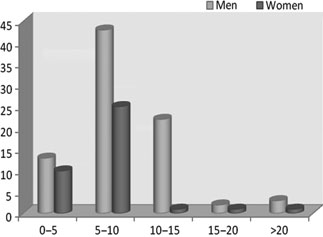 Inflammatory Tinea capitis study included all patients with clinical presentation of and 38 female patients (31.4%) with a sex ratio (M ⁄ F) inflammatory TC (suppurative and painful plaque asso- ciated with purulent drainage), which confirmed by the Our patients come from a rural region in 60 cases mycological examination (direct examination and ⁄ or (49. 59%), Tunis City in 42 cases (34.71%), and an culture positive). Mycological investigation, including a urban area surrounding Tunis city in 19 cases (15.7%).
direct microscopic mount and fungal culture, was Patients were 8.09 ± 3.99 years middle-aged (med- performed for every patient. Clinical materials (scales, ian = 6 years), [range: 18 months to 63 years]. Four hair) were examined microscopically (30% KOH solu- cases (3.3%; three girls, one boy) were diagnosed in tion). In many cases with a positive direct examination, infants less than 2 years old (ranges: 1–2 years). We the type of parasitation of the hair was also recorded.
identified six cases (4.6%) of TC in adults (more than Culture is currently required to identify the precise 18 years) among a total of 42 cases of adult TC organism. Microbiological cultures were incubated at (14.28%), concerning five men (83.33%) and one 25 C in Sabouraud 2% glucose chloramphenicol agar woman (16.67%) with an average age of 31 years and Sabouraud 2% glucose cycloheximide–chloramphe- (from 20 to 63 years). The distribution of patients nicol agar. The specimens were examined twice weekly.
according to age and sex was represented in Fig. 2. We The identification of dermatophytes was based on note that 71.9% of cases (87 cases) occurred in children the macroscopic and microscopic characteristics of the younger than 10 years of age. The mean duration fungi. For each patient, we recorded the age, the gender, of the disease prior to diagnosis was about 1.76 ± the geographical origin, duration of the disease before 1.25 months (range: 10 days to 3 years; median = consultation, the clinical presentation, the contact with other family members or with animals, the responsible Other family members were infected with tinea in dermatophyte and the evolution under treatment and seven cases and contact with animals was reported in complications. The patients were re-evaluated periodi- 35 cases (cats: 17 cases, dogs: 13 cases, rabbits: five cally for at least 6 weeks.
cases). Contributing factors were represented in threecases (2.47%): local application of corticosteroids (twocases) and gastric tumour (woman: 63 years old) in one case. None of the patients had positive HIV serology.
In clinical examination, all patients presented with Epidemiological, clinical features follicular pustular elements on squamous erythematous During the analysed period of 12 years, a total of 121 alopecic patches, realising a kerion (Fig. 3). Cervical cases (10.08 cases ⁄ year) were diagnosed with inflam- (auricular and posterior occipital) lymph nodes and matory TC among a total number of 881 cases of TC fever were found in 15 patients. Inflammatory TC was (13.73%). The year-flow for total TC was represented associated with erythema nodosum in a 5-year-old boy in Fig. 1. The incidence of TC from 1999 was (published case). Physical examination showed Tinea gradually increasing and reaching to its peak in corporis in eight cases (6.61%) (face: four cases, hand: 2006 and 2009. These are 83 male patients (68.6%) two cases, neck: one case, trunk: one case) and Figure 1 The year-flow for total inflammatory Tinea capitis and thedermatophytes isolated from the patients.
Figure 2 Distribution of patients according to age and gender.
 2012 Blackwell Verlag GmbHMycoses, 2013, 56, 110–116 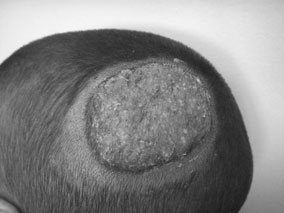 Inflammatory tinea capitis: a 12â•'year study and a review of the literature