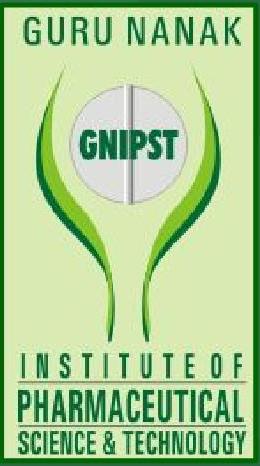 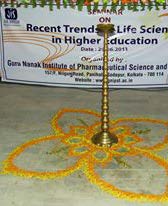 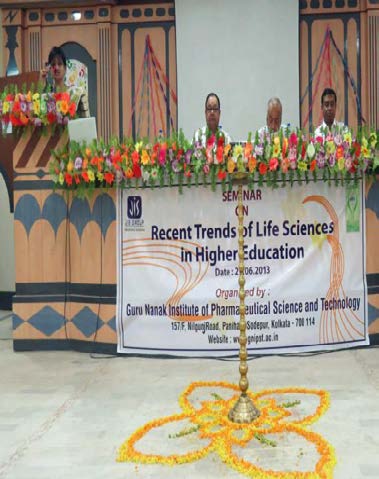 GNIPST BULLETIN 2013 Admission in Biotechnology (M.Sc) and Genetics (M.Sc) is going on
19th July, 2013 Volume No.: 27 Issue No.: 02
TO GROW AS A CENTRE OF EXCELLENCE IN THE FIELD OF PHARMACEUTICAL AND BIOLOGICAL SCIENCE Contents
·
For your comments/contributionOR
For Back-Issues,
1 Bhatt ·a c
GURU NANAK INSTITUTE OF PHARMACE
UTICAL SCIENCE AND
TECHNOLOGY

MESSAGE FROM GNIPST
GNIPST BULLETIN is the official publication of Guru Nanak Institute of Pharmaceutical Science & Technology. All the members of GNIPST are proud to publish the 27th Volume of "GNIPST BULLETIN". Over the last two years this bulletin updating readers with different scientific, cultural or sports activities of this prestigious institute and promoting knowledge of recent development in Pharmaceutical and Biological Sciences. Student's section is informing readers about some curious facts of drug discovery, science, sports and other relevant fields. We look forward to seeing your submission and welcome comments and ideas you may have. LETTER TO THE EDITOR.
NEWS UPDATE
 Protein responsible for 'bad' blood vessel growth
discovered (17th July, 2013)
The team at the UCL Institute of Ophthalmology discovered the new
protein, called LRG1, by screening for mouse genes that are over-
expressed in abnormal retinal blood vessels in diseased eyes.
 New ways for autoimmune disease treatment (17th
July, 2013)
Cells from one's own blood could be converted into a treatment for
autoimmune diseases, like rheumatoid arthritis and Crohn's disease,
based on the discovery of a Purdue University researcher. Chang Kim,
a professor of comparative pathobiology, has created a way to direct
the differentiation of T-cells, a white blood cell that is a key player in the body's immune system  Engineered liver tissue could help scientists test
new drugs and vaccines for malaria(17th July, 2013)
A team led by MIT researchers has now developed a way to grow liver
tissue that can support the liver stage of the life cycle of the two most
common species of malaria, Plasmodium falciparum and Plasmodium vivax.

 Scientists find 3-d structure of key drug target
for diabetes (17th July, 2013)
An international team led by scientists at The Scripps Research Institute (TSRI) has determined and analyzed the three-dimensional atomic structure of the human glucagon receptor. The receptor, found mainly on liver and kidney cells, helps regulate glucose levels in the bloodstream and is the target of potential therapeutic agents for type 2 diabetes.
 Mutation linked to congenital urinary tract defects
(17th July, 2013)
Researchers at Columbia University Medical Center (CUMC) and
collaborators have identified a genetic mutation that causes
congenital malformations of the kidney and urinary tract, a common
form of birth defect and the most common cause of kidney failure in
children. It is the first time that a specific genetic mutation has been
linked to a non-syndromic form of urinary tract malformation.
 Contaminated Ultrasound Gel tied to outbreak of
healthcare-associated infections
(9th July, 2013)
Investigators at Beaumont Health System near Detroit, Michigan
determined contaminated ultrasound gel was the source of bacteria
causing the healthcare associated infection. The findings emphasize
the need for increased scrutiny of contaminated medical products.

Rotavirus Vaccines
Two oral, live, attenuated rotavirus vaccines, Rotarix and RotaTeq, are available internationally; and both vaccines are considered safe and effective in preventing gastrointestinal disease. WHO recommends that rotavirus vaccine for infants should be included in all national immunization programmes. In countries where diarrhoeal deaths account for ≥10% of mortality among children aged <5 years, the introduction of the vaccine is strongly recommended. WHO recommends that the first dose of either RotaTeq or Rotarix be administered at age 6–15 weeks. The maximum age for administering the last dose of either vaccine should be 32 weeks. WHO reiterates that rotavirus vaccines are an important measure that can be used to reduce severe rotavirus-associated diarrhoea and child mortality. DISEASE OUTBREAK NEWS
 Middle East Respiratory Syndrome coronavirus
(MERS-CoV) (18thJuly, 2013)
WHO has been informed of six additional laboratory-confirmed
cases of infection with Middle East respiratory syndrome
coronavirus (MERS-CoV). Of these, two cases have been reported
from Saudi Arabia and four from the United Arab Emirates (UAE).

FORTHCOMING EVENTS
 The 2nd Pharm. Tech IAPST International Conference on "New insights into diseases and recent therapeutic approaches" from 17th to 19th January 2014 in Kolkata, India DRUGS UPDATES
 FDA approves the first non-hormonal treatment
for hot flashes associated with menopause(28thJune)
The U.S. Food and Drug Administration approved Brisdelle
(paroxetine)to treat moderate to severe hot flashes (vasomotor
symptoms) associated with menopause. Brisdelle, which contains the
selective serotonin reuptake inhibitor paroxetine mesylate, is
currently the only non-hormonal treatment for hot flashes approved
by the FDA
CAMPUS NEWS
 One day seminar cum teachers' development programme for school teachers on the theme of "Recent Trends of Life Sciences in Higher
Education" organized by GNIPST held on 29th June, 2013 at GNIPST
auditorium. The programme was inaugurated by Prof . Asit Guha,
Director of JIS Group, Mr. U.S. Mukherjee, Dy Director of JIS Group
and Dr. Abhijit Sengupta, Director cum Principal of GNIPST with
lamp lighting. The programme started with an opening song
performed by the B.Pharm students of this institute. The seminar
consists of a series of lectures, video presentations and poster session.
On the pre lunch session 4 lectures were given by Dr. Lopamudra
Dutta, Mr. Debabrata Ghosh Dastidar, Ms. Swati Nandy and Ms.
Tamalika Chakraborty respectively. On their presentation the
speakers enlighten the recent development of Pharmacy, Genetics and
Microbiology and their correlation with Life Sciences. On the post
lunch session, Ms. Saini Setua and Ms. Sanchari Bhattacharjee explained the recent development and career opportunities in Biotechnology and Hospital Management. The programme was concluded with valedictory session and certificate distribution. About 50 Higher secondary school teachers from different schools of Kolkata and North& South 24 Parganas district of West Bengal participated in this programme. A good interactive session between participants and speakers was observed in the seminar. The seminar was a great success with the effort of faculties, staffs and students of our Institute. It was a unique discussion platform for school teachers and professional of the emerging and newer branches of Life Science.  The following B.Pharm. final year students have qualified, GPAT- 2013. We congratulate them all. Amanpreet Kaur, Mohua Das, SouravBagchi, Uddipta Ghosh Dastidar, Siddarth Shah, PraptiChakraborty, SubhradipRoychoudhury, Soumyajit Das,  GNIPST is now approved by AICTE and affiliated to WBUT for conducting the two years post graduate course (M.Pharm) in PHARMACEUTICS. The approved number of seat is 18. STUDENTS' SECTION
 WHO CAN ANS WER FIRS T????
Which Indian company has developed an indigenous vaccine against Rotavirus? Name of which virus was derived from a Latin word for wheel? Answer of Previous Issue Question: A) Fluorite B)Rifampicin  Send your thoughts/ Quiz/Puzzles/games/write- ups or any other contributions for Students' Section& answers of this Section a EDITOR'S NOTE
I am proud to publish the 2nd issue of 27th Volume of GNIPST
BULLETIN.GNIPST BULLETIN now connected globally through
facebook account ‘GNIPST bulletin'
I want to convey my thanks to all the GNIPST members and the readers for their valuable comments, encouragement and supports. I am thankful to Dr. Abhijit Sengupta, Director of GNIPST and
Prof. Dipankar Chakraborty, Registrar of GNIPST for their
valuable advice and encouragement. Special thanks to Dr. Prerona
Saha and Mr. Debabrata Ghosh Dastidar for their kind co-operation
and technical supports.
An important part of the improvement of the bulletin is the contribution of the readers. You are invited to send in your write ups, notes, critiques or any kind of contribution for the forthcoming special and regular issue. ARCHIVE
 The general body meeting of APTI, Bengal Branch has been conducted at GNIPST on 15th June, 2012. The program started with a nice presentation by Dr. Pulok Kr. Mukherjee, School of Natural Products, JU on the skill to write a good manuscript for publication in impact journals. It was followed by nearly two hour long discussion among more than thirty participants on different aspects of pharmacy education. Five nonmember participants applied for membership on that very day.  GNIPST is now approved by AICTE and affiliated to WBUT for conducting the two years' post graduate course (M.Pharm) in PHARMACOLOGY. The approved number of seat is 18.  The number of seats in B.Pharm. has been increased from 60 to 120.
 AICTE has sanctioned a release of grant under Research Promotion Scheme (RPS) during the financial year 2012-13to GNIPST as per the details below: a. Beneficiary Institution: Guru Nanak Institution of Pharmaceutical Science & Technology. b. Principal Investigator: Dr. LopamudraDutta. c. Grant-in-aid sanctioned:Rs. 16,25000/- only d. Approved duration: 3 years e. Title of the project: Screening and identification of potential medicinal plant of Purulia& Bankura districts of West Bengal with
respect to diseases such as diabetes, rheumatism, Jaundice,
hypertension and developing biotechnological tools for enhancing
bioactive molecules in these plants.