Publication details, including instructions for authors and subscription information:

Oxidation of Emerging Contaminants during Pilot-Scale
Ozonation of Secondary Treated Municipal Effluent
Saileshkumar Singha, Rajesh Setha, Shahram Tabeab & Paul Yangb
a Civil and Environmental Engineering Department, University of Windsor, Windsor, Ontario
N9B 3P4, Canada
b Ontario Ministry of the Environment, Ontario M7A 1N3, Canada
Accepted author version posted online: 02 Feb 2015.Published online: 02 Feb 2015.
To cite this article: Saileshkumar Singh, Rajesh Seth, Shahram Tabe & Paul Yang (2015): Oxidation of Emerging Contaminants
during Pilot-Scale Ozonation of Secondary Treated Municipal Effluent, Ozone: Science & Engineering: The Journal of the
International Ozone Association, DOI:
To link to this article:
PLEASE SCROLL DOWN FOR ARTICLE Taylor & Francis makes every effort to ensure the accuracy of all the information (the "Content") containedin the publications on our platform. However, Taylor & Francis, our agents, and our licensors make norepresentations or warranties whatsoever as to the accuracy, completeness, or suitability for any purpose of theContent. Any opinions and views expressed in this publication are the opinions and views of the authors, andare not the views of or endorsed by Taylor & Francis. The accuracy of the Content should not be relied upon andshould be independently verified with primary sources of information. Taylor and Francis shall not be liable forany losses, actions, claims, proceedings, demands, costs, expenses, damages, and other liabilities whatsoeveror howsoever caused arising directly or indirectly in connection with, in relation to or arising out of the use ofthe Content.
This article may be used for research, teaching, and private study purposes. Any substantial or systematicreproduction, redistribution, reselling, loan, sub-licensing, systematic supply, or distribution in anyform to anyone is expressly forbidden. T Ozone: Science & Engineering, 37: 1–7Copyright 2015 International Ozone AssociationISSN: 0191-9512 print / 1547-6545 onlineDOI: 10.1080/01919512.2014.998755 Oxidation of Emerging Contaminants during Pilot-Scale
Ozonation of Secondary Treated Municipal Effluent
Saileshkumar Singh,Rajesh Seth,Shahram Tabe,and Paul Yang
1Civil and Environmental Engineering Department, University of Windsor, Windsor, Ontario N9B 3P4, Canada 2Ontario Ministry of the Environment, Ontario M7A 1N3, Canada The transformation of 41 target emerging contaminants in precautionary principle dictates that their discharge to the secondary treated municipal wastewater effluent in Canada environment should be limited to the extent possible.
was examined at pilot-scale, at transferred ozone doses of Studies conducted in various parts of the world have 2.8 mg/L (0.46 O3/mg DOC) and 4.4 mg/L (0.72 mg O3/mgDOC). In general, transformation efficiencies of CECs either detected the presence of several CECs in potable water increased or were retained at the higher ozone dose. The sources (Auriol et al. Benotti et al. Daughton and higher ozone dose of 0.72 mg O3/mg DOC (Zspec = 0.6 mg Ternes Huber et al. Tabe et al. Municipal O3/mg DOC) was sufficient to transform 21 of the 31 detected wastewater treatment plants are an important point source CECs by over 80% as well as achieving the disinfection target for many CECs released to such sources (Daughton and of < 200 MPN E. coli per 100 mL. Ternes Petrovi´c et al. It makes logical sense to treat and remove the CECs from the municipal wastewater Emerging Concern, Municipal Wastewater, Pharma- effluent (MWWE) when their concentration is higher, rather than from a water supply for potable water in which they Secondary Treated Effluent, Wastewater Treatment have been diluted several orders of magnitude (Oneby et al.
Tabe et al. The conventional technologies totreat MWWE are efficient in removing suspended solids, organics, and nutrients. However, they are not effective inremoving many CECs that are present in trace quantities Studies in the 1990s reported trace amounts of contami- (Ternes Hence, new treatment technologies or addi- nants in wastewater treatment plant effluent that could induce tional treatment processes are required to remove these CECs, estrogenic effects and were suspected to be responsible for which are normally low molecular weight compounds in the feminization of male fish in water bodies receiving such the size range of about 150 to 500 Daltons (Snyder et al.
Downloaded by [Mrs Mary Ann Muller] at 11:15 19 June 2015 effluent discharges (Folmar et al. Harries et al. Since then, several other trace contaminants of human and The scientific community has been aware of the disinfec- ecological health concern have been detected in waters and tion property of ozone since the start of the 20th century.
wastewaters (Shon et al. Snyder et al. Ternes Recent studies that demonstrated the potential of ozone to et al. These contaminants are grouped commonly oxidize and transform many CECs have renewed interest in as contaminants of emerging concern (CECs), and include the technology for wastewater treatment and reuse applica- pharmaceutically active compounds (PhACs), personal care tions (Bahr et al. Hansen et al. Snyder et al. products (PCPs), fire retardants, and nanomaterials. Although Ternes et al. Further benefits of ozonation of MWWE evidence of actual observed environmental effects from expo- include an increase in its dissolved oxygen levels, decreases sure to CECs is limited (Bloetscher and Plummer in its chemical oxygen demand, and improvement in aes-thetic characteristics due to reduction in turbidity and color.
Received 2/11/2014; Accepted 11/27/2014 In addition, due to the significant advances in the ozone man- Address correspondence to Dr. Rajesh Seth, Civil and ufacturing technology in the last couple of decades and the Environmental Engineering Department, University of Windsor, experience gained from studies on ozone treatment of water 401 Sunset Avenue, Windsor, Ontario, N9B 3P4, Canada. E-mail: and wastewater, costs for ozone treatment have declined to Ozonation of Secondary Treated Municipal Effluent July–August 2015 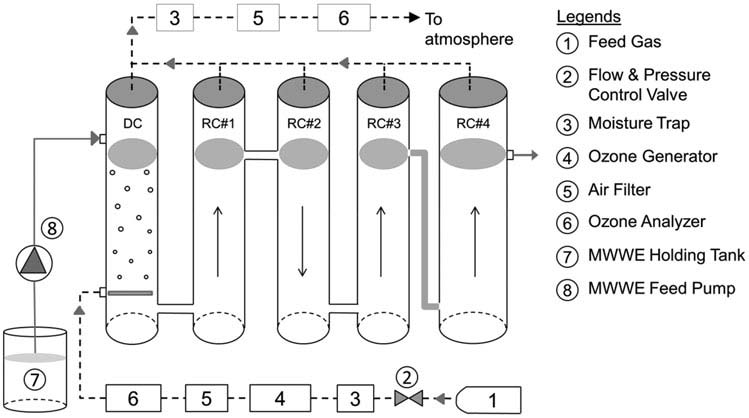 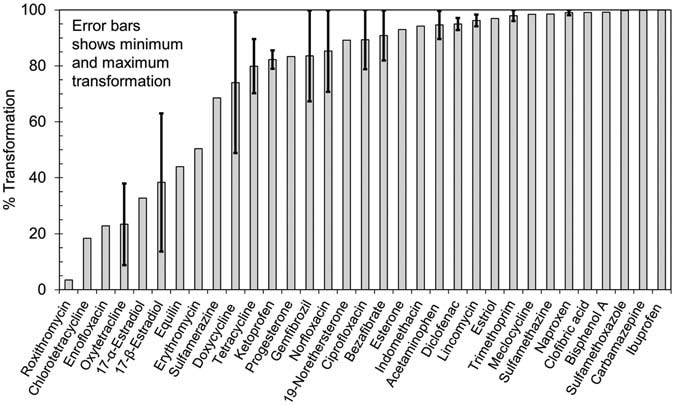 of other studies (Hollender et al. Huber et al. Transformation of CECs at TOD of 2.8 mg/L
Reungoat et al. Snyder et al. (0.46 O3/mg DOC) and TOD of 4.4 mg/L (0.72 mg
The transformation of antidepressant and lipid regulator drugs such as carbamazepine, bezafibrate, clofibric acid, and During the second experimental run, the MWWE was gemfibrozil was above 90%. Bahr et al. have reported treated with two different ozone doses. The concentrations 17 to 21% transformation of bezafibrate and clofibric acid at of target CECs in MWWE are presented in (Exp-2).
ozone dose of 0.4 mg O3/mg DOC. They observed 74 to 98% presents summary of the observed transformation reduction at a higher ozone dose of 0.8 mg O3/mg DOC.
efficiencies of the detected CECs at the two ozone doses.
Hollender et al. have also reported average 88% and The result shows that the number of CECs detected in the 66% removal of bezafibrate and clofibric acid at ozone doses unozonated MWWE and but not in the ozonated MWWE of 0.6 to 0.67 mg O3/mg DOC. Snyder et al. and increased from three at the TOD of 2.8 mg/L to seven at the Dickenson et al. have reported > 93% transformation TOD of 4.4 mg/L. In general, the transformation of CECs of gemfibrozil at an ozone dose of around 0.3 mg O3/mg C.
was higher at the higher ozone dose. The transformation of Concentrations observed of most of the potential EDCs BPA, carbamazepine, diclofenac, indomethacin, lincomycin, (estrogen replacement agents, ovulation inhibitors, repro- sulfamethoxazole, trimethoprim, and was more than 80% at ductive hormones) were low. Transformations of 19- both ozone doses. There was a noticeable increase in the norethisterone, estrone (E1), estriol (E3), and bisphenol-A transformation of naproxen, ciprofloxacin, bezafibrate, and (BPA) were in the range of 93–99%, which is consistent clofibric acid from 27–67% at TOD of 2.8 mg/L (0.46 O3/mg with values reported in literature (Huber et al. Nakada DOC) to 79– >99% at TOD of 4.4 mg/L (0.72 O3/mg et al. Ternes et al. Wert et al. The trans- DOC). Transformations of enrofloxacin, roxithromycin, formation of E2 was in the range of 14 to 63%. Equilin oxytetracycline, and chlortetracycline were below 30% at both and 17-α-estradiol were detected in concentrations less than the ozone dose.
10 ng/L in one sampling event only and their transformationafter ozonation was 44% and 33%.
shows the transformation observed of CECs at TOD of 4.4 mg/L. For 21 of 31 CECs for whichtransformation efficiency could be calculated, average trans- This study reports results from pilot-scale ozone treat- formation efficiency exceeded 80%. The average trans- ment of secondary-treated municipal wastewater effluent in formation of another six CECs including 17-α-estradiol, Canada for 41 target CECs at TODs of 2.8 mg/L (0.46 O 17-β-estradiol, erythromycin, sulfamerazine, doxycycline, DOC) and 4.4 mg/L (0.72 mg O and tetracycline, was between 30–80%. For the remaining 3/mg DOC). In general, the transformation efficiencies (TEs) of CECs either increased or four (roxithromycin, chlortetracycline, enrofloxacin, and maintained at the higher ozone dose. TEs of > 80% were oxytetracycline; all antibiotics), the average transformation observed at both ozone doses for seven CECs (bisphenol was less than 30%.
A, carbamazepine, diclofenac, indomethacin, lincomycin, Downloaded by [Mrs Mary Ann Muller] at 11:15 19 June 2015 FIGURE 2.
Transformation of CECs at TOD of 4.4 mg/L (0.72 mg O3/mg DOC).
Ozonation of Secondary Treated Municipal Effluent July–August 2015 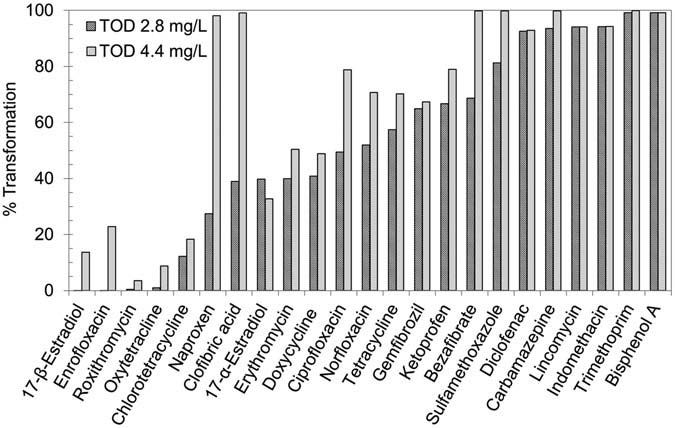