International Environmental Modelling and Software Society (iEMSs) 2012 International Congress on Environmental Modelling and Software Managing Resources of a Limited Planet, Sixth Biennial Meeting, Leipzig, Germany R. Seppelt, A.A. Voinov, S. Lange, D. Bankamp (Eds.) Enhancing Stocks and Flows modelling to
support sustainable resource management
in low carbon infrastructure transitions.
Jonathan Busch1,2, David Dawson1,2, Katy Roelich1,2, Julia Steinberger1, Philip
Purnell2
1. Sustainability Research Institute, University of Leeds 2. Institute for Resilient Infrastructure, University of Leeds Abstract: Emissions reductions of the scale required to avoid dangerous climate
change will require rapid, systemic change including extensive refurbishment and
replacement of infrastructure systems. The technologies required to make this
systemic change exist today but many rely on critical metals which are at risk of
scarcity and difficult to substitute. There has been extensive debate in the
academic and policy literature about whether the availability of these critical metals
will constrain the transformation required. However, policy decisions are being
made without addressing these material barriers or considering how critical
materials could be managed more sustainably during future infrastructure renewal.
This project enhances the established stocks and flows (S&F) methodology used in
industrial ecology by adding layers of extra information on material criticality. This
transforms S&F from being concerned only with quantities of materials, to capturing
supply constraints as well. This in turn allows us to analyse how transitions in the
physical infrastructure may introduce vulnerabilities, associated with materials
supply. More excitingly, it allows us to identify conflicts between low carbon
pathways and sustainable resource management. This paper presents the results
of a proof-of-concept case study that demonstrates the enhanced S&F
methodology on a simple infrastructure system. The findings of the proof-of-
concept study will be used to propose improvements to the modelling approach
and its application to policy development and decision making.
Keywords: Stocks and Flows, Critical materials, Low Carbon Infrastructure
transitions, sustainable resource management.

Emission reductions of the scale required to avoid dangerous climate change will
require rapid, systemic changes including extensive refurbishment and
replacement of infrastructure systems. This may include a rapid increase in
renewable energy provision; new nuclear power stations; a bigger, smarter grid to
cope with fluctuating supply; electric vehicle infrastructure; shifting freight to rail
and waterways; and preparing roads, railways etc. for more intense heat or rainfall
[IEA 2011; HM Government 2009].
Such disruptive transitions in the mix of infrastructure technology may introduce
new vulnerabilities, as new technologies need materials that are not widely present
in, or demanded by, current infrastructure. Many of these materials are described
as ‘critical' because they are at risk of scarcity and difficult to substitute [European
Commission 2010]. Introducing new materials into physical infrastructure, where
annual production is measured in Giga-tonnes, can increase demand by orders of
magnitude or induce criticality in previously abundant materials. Current
procurement and design processes ignore the physical, economic and geopolitical
J.Busch et al. / Enhancing Stocks and Flows modelling to support sustainable resource management in low carbon infrastructure transitions. risks associated with critical materials; this will introduce vulnerability in new
infrastructure and further reduce its sustainability and adaptability. There has been
extensive debate in the academic and policy literature about the constraints these
critical metals could place on the transformation required [Kleijn et al. 2011; Moss
et al. 2011]. Most scenarios of low carbon technology transitions, however, do not
consider these constraints, even though demand for scarce materials is expected
to multiply five- to ten-fold as emerging economies grow rapidly [Graedel and Cao
2010]. This poses a challenge to designers and policy makers, who must develop
carbon reduction strategies for infrastructure without being able to assess whether
they are increasing or decreasing its vulnerability. As a result, there is a genuine
need for a new method that allows policy makers to take this into account.
This project aims to enhance the established stocks and flows (S&F) methodology
used in Industrial Ecology. In our methodology, physical infrastructure is
disaggregated into structures and their components, both of which may contain
materials. Additional layers will be added containing information on material
criticality. This will allow us to analyse how infrastructure transitions may introduce
vulnerabilities associated with critical material supply and analyse reuse/recycling
strategies to alleviate these vulnerabilities. 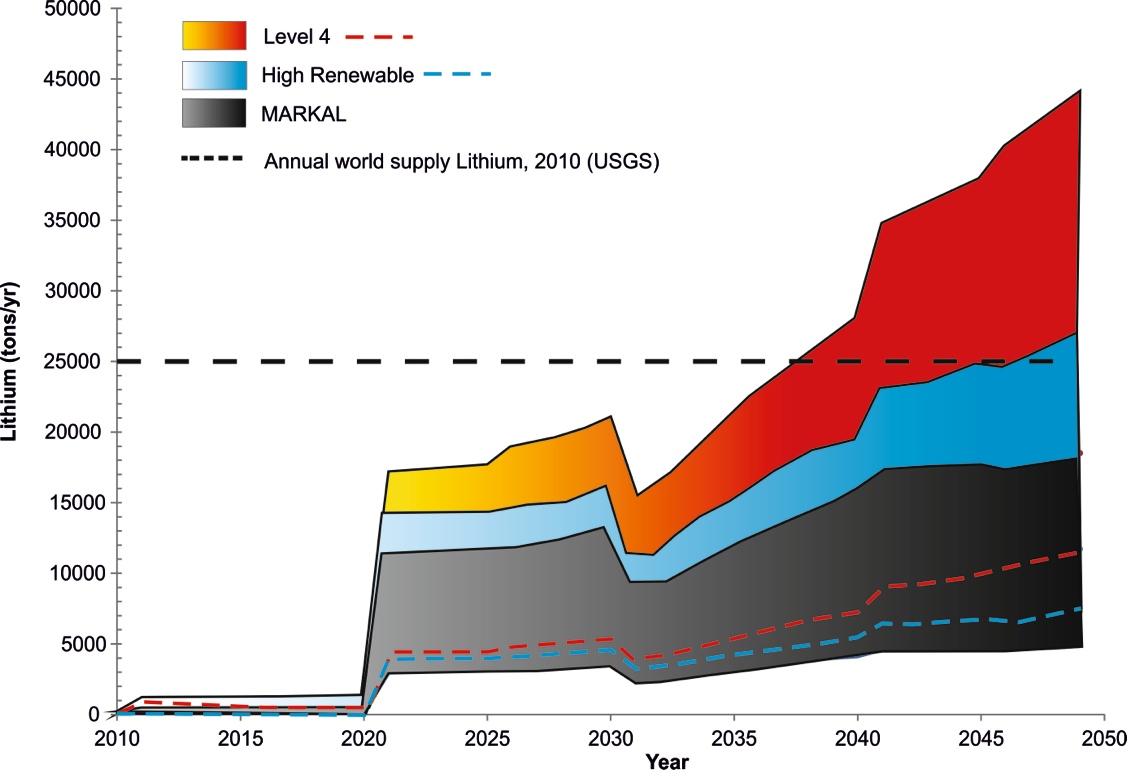 J.Busch et al. / Enhancing Stocks and Flows modelling to support sustainable resource management in low carbon infrastructure transitions. Figure 2: Annual lithium demand from UK passenger vehicles in the UK based on
three transition scenarios [HM Govenrment 2010, 2011]. Dashed lines represent the lower estimates based on the range of material intensities for Li-ion batteries in EVs and PHEVs (Bauer et al. 2010). Estimates are compared with annual world supply (mine production) taken from USGS (2010). The model is also capable of estimating the amount of platinum that will be available from future scrapped ICE vehicles estimated in the scenarios. The most conservative scenario of EV and PHEV deployment and material intensity estimates a peak in 2022 that suggest approximately 250 tonnes of platinum will be scrapped in that year (assuming all ICE vehicles have a catalytic converter). This figure represents approximately 30% of the estimated annual world mine production of platinum in 2010 [USGS 2010]. It has the potential to displace virgin metal reducing the need to mine primary materials. This case study provides an illustrative example of the application of the enhanced S&F model to a low carbon infrastructure transition. Electric vehicles make for a particularly interesting study as they are inherently componentised technology structures; batteries are components of the vehicles but have their own lifetime functions. The detailed effect of this in the model is that a significant fraction of batteries do not in fact last until their average lifetime. Batteries will be replaced on average once and then scrapped with the parent vehicle. An interesting follow-up to this case study will be on the effect of this lifetime mis-match on different replacement/recovery strategies for resource management. A further necessary extension of this case study will use fictitious scenarios for model validation. The usual validation and calibration strategy using historical data is not applicable to most of the case studies of interest to this project as the existing stock of most low carbon technologies is very small. Instead, the model will be validated against a set of fictitious scenarios designed to be simple enough to predict independently of the model. J.Busch et al. / Enhancing Stocks and Flows modelling to support sustainable resource management in low carbon infrastructure transitions. FUTURE DEVELOPMENTS

The purpose of developing an enhanced S&F methodology is to assess the
vulnerability of low carbon infrastructure transition plans to material criticality. In
order to make such an assessment, however, additional information is required.
Factors that contribute to material criticality are: geological scarcity; geopolitics;
environmental impact; demand from other sources; importance to economy or low
carbon strategy; potential for reuse/refurbishment/recycling of components or
materials and substitutability of materials [Roelich 2012]. The model must therefore
include the information needed to make an assessment of the risk posed by each
of these factors.
All but the last two of these factors (recyclability and substitutability) we term
‘derived factors' as they are purely functions of the amount of a material required.
The current infrastructure S&F model allows us to estimate this amount. The
information used to assess the magnitude of these factors and their impact on low
carbon transitions can be added as an extra layer to the model once the material
stock levels are known. The next phase of work will determine a method that
combines these diverse criticality factors into a useful index, or set of indices.
These indices will be used, in combination with material flow data, to assess the
increase in criticality of metals and the resulting vulnerability of low carbon
transitions to this criticality.
The substitutability and recyclability of materials and technologies are determined
by the properties of these objects. Their assessment must be integrated into the
model in a way that changes the dynamics of the stocks and flows of the
technology and material objects (Figure 1). These are, therefore, termed ‘dynamics
factors'. The next phase of work will include amendments to the model to
incorporate substitution of materials, components and structures and recycling
based on consideration of their properties.
6.0
CONCLUSIONS

This paper has presented the current developments towards a methodology that
applies an enhanced stocks and flows model to the assessment of vulnerabilities of
materials in low carbon infrastructure transitions. The structural implementation of
the basic model was outlined and a proof-of-concept case study has been
demonstrated. This highlighted a significant step change in resource requires for
the UK's low carbon transport infrastructure, and illustrates the urgent need for a
more robust modelling framework. Finally, in order to achieve such a framework
the anticipated model enhancements were outlined. With these additions, it will be
possible to assess the UK's infrastructure vulnerability to material criticality in low
carbon transitions.

Illicit drugs and by Angela Dean Almost half the population of Australian adults reports use of an illicit substance at least once. Therefore it is likely that some of our patients may be using illicit drugs in combination with other medications. Illicit substance use may contribute to adverse effects, interfere with treatment efficacy, or even augment treatment effects. Additionally, regular users of illicit substances may exhibit poor medication adherence or impaired ability to engage in behaviours such as blood glucose testing in diabetes.