Nano Res. 2011, 4(3): 290–296 Nano Res. 2011, 4(3): 290–296 DOI 10.1007/s12274-010-0081-x CN Research Article Hybrid Silicon-Carbon Nanostructured Composites as Superior
Anodes for Lithium Ion Batteries
Po-Chiang Chen1, Jing Xu1, Haitian Chen2, and Chongwu Zhou2 () 1 Mork Family Department of Chemical Engineering and Materials Science, University of Southern California, Los Angeles, CA 90089, USA2 Ming-Hsieh Department of Electrical Engineering, University of Southern California, Los Angeles, CA 90089, USA Received: 6 October 2010 / Revised: 13 November 2010 / Accepted: 13 November 2010 Tsinghua University Press and Springer-Verlag Berlin Heidelberg 2010 ABSTRACT
We have successfully fabricated a hybrid silicon–carbon nanostructured composite with large area (about
25.5 in2) in a simple fashion using a conventional sputtering system. When used as the anode in lithium ion
batteries, the uniformly deposited amorphous silicon (a-Si) works as the active material to store electrical energy,
and the pre-coated carbon nanofibers (CNFs) serve as both the electron conducting pathway and a strain/stress
relaxation layer for the sputtered a-Si layers during the intercalation process of lithium ions. As a result, the
as-fabricated lithium ion batteries, with deposited a-Si thicknesses of 200 nm or 300 nm, not only exhibit a high
specific capacity of >2000 mA·h/g, but also show a good capacity retention of over 80% and Coulombic efficiency
of >98% after a large number of charge/discharge experiments. Our approach offers an efficient and scalable
method to obtain silicon–carbon nanostructured composites for application in lithium ion batteries.
KEYWORDS
Amorphous silicon, carbon nanofibers, lithium ion batteries, hybrid nanostructured composite
1. Introduction
(1-D) nanostructures, have the advantages of high surface area (such as single-walled carbon nanotubes In recent years, due to the depletion of fossil fuels with a surface area of 300–600 m2/g) and short ion and the increasing concern about environmental issues, diffusion length, and have been viewed as components interest in developing alternative energy sources and for next-generation electrochemical energy conversion devices, including solar cells, fuel cells, supercapacitors, and storage devices [9–11]. For instance, TiO2–B nano- and lithium ion batteries, has increased rapidly [1–6]. wires have been shown to have a higher specific Among the above-mentioned energy conversion and capacity than TiO2–B nanoparticle-based materials storage devices, lithium ion batteries have been widely when used as anodes in lithium ion batteries [11]. applied in both portable electronics and consumer More recently, silicon (Si) nanostructures have been electronics because of their high energy density, high suggested to be one of the most promising anode power density, and low fabrication cost. Most research materials for lithium ion batteries and have attracted efforts have been devoted to the synthesis of electrode considerable attention because of their large theoretical materials and the design of electrode structures [7, 8] by gravimetric specific capacity of 4200 mA·h/g and adapting nanostructured materials. One-dimensional relatively low working potential at around 0.5 V vs. Address correspondence to [email protected] 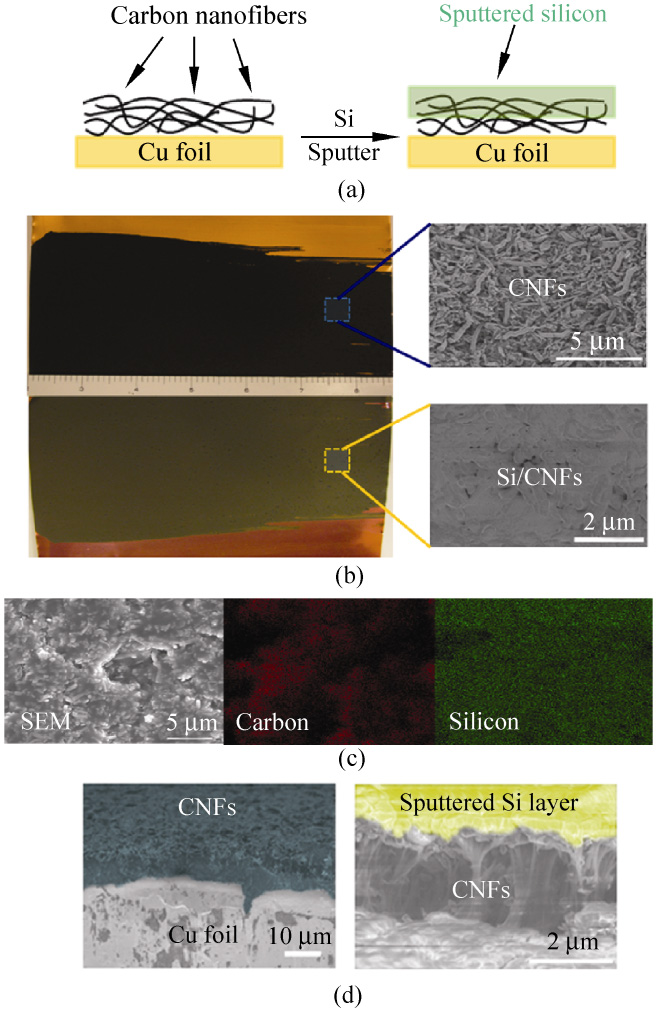 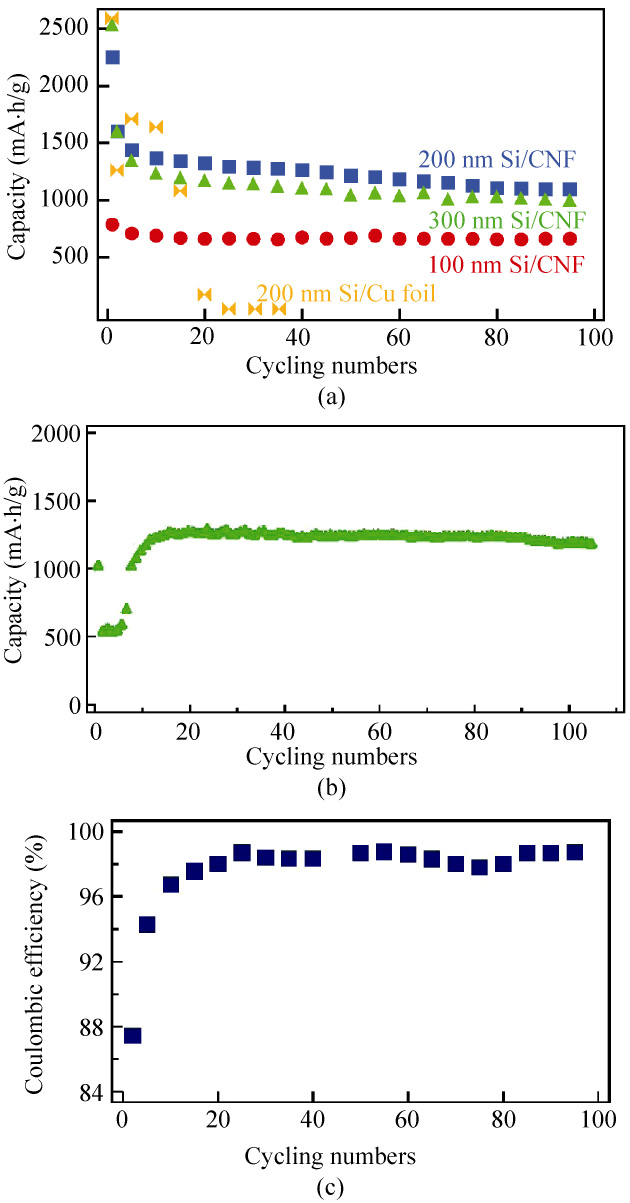 Nano Res. 2011, 4(3): 290–296 is more space for volume expansion than in the thicker sputtered Si samples. For 200 nm Si/CNF anodes, the capacity retention up to the 50th cycle ( 80%) is close to values reported in the literature. Good capacity retention was also observed even at a higher charge/ discharge rate (C/4). In this case, as shown in Fig. 3(b), the 300 nm Si/CNF anode exhibited a high specific capacity up to 1200 mA·h/g after 105 cycles, corres- ponding to over 90% capacity retention. In the initial stage of the cycle tests, a reduced capacity was obser- ved, and after about 10 cycles, the capacity recovered to about 1200 mA·h/g. Similar observations have reported by Takamura et al. [31, 32] and can be understood in terms of the Si film initially being very compact and unable to accept a large amount of Li, but after repeated Li insertion/extraction, the film structure underwent changes enabling it to accept more Li. To highlight the advantage of our Si/CNF anodes, we directly sputtered 200 nm Si on Cu foil (Si/Cu) and carried out GV measurements as a comparison. As expected, the Si/Cu anode showed extremely poor capacity retention, which can be attributed to the huge volume expansion after Li ion insertion/extraction. After 20 cycles, there was almost no measurable capacity from the anode, indicating a total loss of active material. We also investigated the Coulombic efficiency of our devices and, as an example, the results for the 200 nm sputtered Si/CNF anodes are shown in Fig. 3(c). The cell exhibited a good first cycle of Coulombic efficiency of 88%. The Coulombic efficiency in the second cycle increased to 93% and a very high Coulombic efficiency between 98%–99% was Figure 3 (a) Discharge capacity of 100 nm, 200 nm, and 300 nm
sputtered Si/CNF anodes, and 200 nm Si/Cu anodes at a current
maintained over the next 80 cycles. Subsequently, the rate C/10. (b) Discharge capacity of 300 nm sputtered Si/CNF discharge capacities faded a little but remained at anodes at a current rate C/4. (c) Coulombic efficiency of a 200 nm 70% up to 90 cycles (relative to the second cycle). sputtered Si/CNF anode Such good capacity retention was not observed for the 200 nm electrode, but also for 100 nm and 300 nm the Si surface after 95 cycles appears rough, as a sputtered Si/CNF anodes. consequence of the lithiation/delithiation processes. In order to study any variation in chemical com- Figures 4(b) and 4(c) show EDS images of the sputtered position of our sputtered Si/CNF anodes after the Si/CNF electrodes. The red color represents carbon cycling experiments, EDS was carried out and the atoms and the green color indicates the presence of results are shown in Fig. 4. The SEM image of a 200 nm silicon atoms. The EDS mapping strongly suggests sputtered Si/CNF anode after 95 charge/discharge that the sputtered Si layer is still well coated on CNFs cycles (Fig. 4(a)) clearly shows that there is still good and has a strong adhesion with them, even after a adhesion between Si and the substrate. In addition, large number of cycling experiments. Although the compared with the pristine surface shown in Fig. 1(b), sputtered Si film was broken into small grain domains 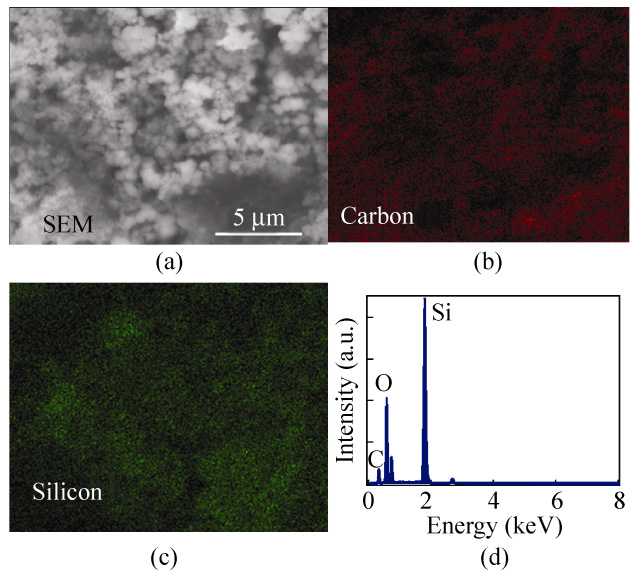