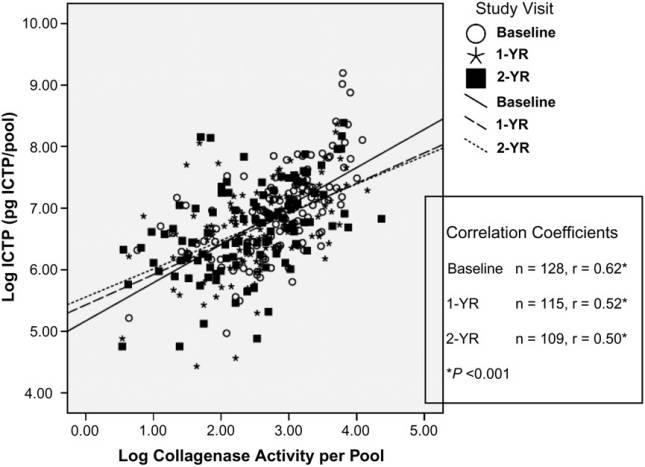 SDD and GCF Biomarkers in Postmenopausal Women Volume 79 • Number 8 not use concomitant medications (P =0.0002), whereas this effect was not sig-nificant in subjects who used concomi-tant medications (P = 0.7). Reductionsin GCF collagenase activity and MMP-8 immunoreactive levels due to SDDtherapy were not complete (i.e., resid-ual collagenase activity and MMP-8 pro-tein levels could be detected at 1 and 2years; the therapeutic advantage of thisless-than-complete reduction is ad-dressed in the Discussion). No other sig-nificant associations between treatmentand MMP levels were observed.
Regarding the levels of IL-1b in the GCF samples from placebo- and SDD-treated subjects over the 2-year timeperiod, the pattern of change was simi-lar to that seen for collagenase andICTP, although the reduction in IL- 1b levels was not significant except for Correlation between natural log–transformed col agenase activity (percentage lysis of a subgroup of subjects (see below). In collagenase-susceptible substrate) and natural log–transformed ICTP in GCF of PM women general, based on intent-to-treat and with chronic periodontitis over the 2-year clinical protocol for SDD and placebo subjects on per-protocol analyses, the SDD sub- combined. Linear regression lines are drawn for each time point. 1-YR = 1 year; 2-YR = jects exhibited ;20% and 33% lower median values, respectively, for IL-1b over the study time period compared to placebo subjects, after adjusting for different base-line values, but these data were not statistically signif- Distribution of MMP-1 (collagenase-1), icant (P >0.2 for each; Fig. 5). Regarding subgroup MMP-8 (collagenase-2), and MMP-13 analyses, the data for IL-1b were not statistically sig- nificant for subjects within 5 years of menopause (P =0.1). However, for those subjects beyond 5 years of menopause, subjects administered SDD showed a statistically significant 51% lower median value forIL-1b per pool of GCF than placebo-treated subjects (OR = 0.49; 95% CI: 76% lower to 1% lower; P = 87.5 (39.2 to 98.5) 0.05). When the data were expressed per microliterof GCF, a similar pattern of change was seen, and re- sults from the intent-to-treat and per-protocol analyses Data reported as the percentage of total collagenase protein in GCF.
were similar, but these data were not statistically signif-icant (data not shown).
Moreover, 1) the reduction of MMP-8 in SDD-treated subjects likely was driven by differences in the higher The rationale for the current interventional (i.e., long- term administration of SDD) human clinical trial on (PMN)-type MMP-8 (65 to 75 kDa), with a 38% reduc- PM women exhibiting local (periodontitis) and mild tion in the odds of higher PMN values for SDD subjects systemic (osteopenia) bone loss was two-fold. First, compared to placebo subjects (P = 0.1), and a much organ and cell culture, in vivo animal, and human smaller effect on the mesenchymal-type MMP-8 (45 studies1-3,8-11,16,20,25-29 over the past 25 years dem- to 55 kDa) where the odds of non-zero values were onstrated beneficial, non-antibiotic effects of TC com- 12% lower for SDD subjects compared to placebo pounds (e.g., SDD and CMTs) on pathologic local and subjects (P = 0.8), and 2) subgroup analysis demon- systemic bone loss. Second, it is increasingly being strated that the dramatic reduction in MMP-8 levels recognized that patients and experimental animals due to SDD therapy reflected an 83% lower odds of with systemic bone-deficiency disease, particularly high values for this collagenase in subjects who did PM osteoporosis (but also other disorders such as