VASCULITIS
The vasculitides are a heterogeneous group of clinicopathological entities that share the common feature of vascular inflammation and injury. While a number of underlying causes can be identified in some disorders, the aetiology is unknown in many. The pathogenetic mechanisms involved are mainly immunological, immune complex mediated tissue injury being the most commonly incriminated factor. Vasculitis may be the sole manifestation of a disease or it may occur as part of another Primary disease. It may be confined to one organ or may affect multiple organs simultaneously. Vasculitides is generally classified based on the size of the vessel involved: I. Large vessel vasculitis: Giant cell arteritis Takayasu's arteritis II. Mediumvessel vasculitis: Polyarteritis nodosa Kawasaki disease III. Small vessel vasculitis: Microscopic polyangiitis Leukocytoclastic vasculitis Wegener's granulomatosis Churg-Strauss disease Vasculitis Syndromes may also be classified as Primary and Secondary Vasculitis Syndromes. ETIOLOGY & PATHOGENESIS
The cause remains undetermined in most vasculitic syndromes, while some forms of vasculitides may be ascribed to underlying factors like infections, drug reactions, malignancy or connective tissue disorders. Immunologic damage by immune-complex deposition or cell-mediated hypersensitivity is responsible in the majority of cases. A number of factors like genetic predisposition, environmental exposure and immue regulation to antigens are all important. The possible immunopathologic mechanism in the causation of vasculitis are: 1. Pathogenic immune complex formation and or deposition within the vessel wall. This leads to
complement activation and chemotactic attraction of neutrophils, subsequent phagocytosis
with liberation of neutrophil granular products leads to vascular damage. Eg. Henoch Schonlein purpura, Conective tisu diseases, Hepatitis B & C associated with Polyarteritis Nodosa and mixed ryglobulinemai. 2. Cell-mediated hypersensitivity: Antigenic exposure may attract lymphocytes which liberate
cytokines causing tissue damage and further activation of macrophages and lymphocytes and
granuloma formation. Eg.Giant cell arteritis and Takayasu's Arteritis.
3. Production of Antineutrophilic Cytoplasmi Antibodies(ANCA) – Eg. Wegener's Granulomatosis, Churg Strauss Syndrome & Microscopic Polyangiitis. ANCAs were originally described in Davies et al in 1982 in segmental necrotising glomerulonephritis, and by van der Woude et al in 1985 in Wegener's. The Second International ANCA Workshop, held in The Netherlands in May 1989, fixed the nomenclature on perinuclear vs. cytoplasmic patterns, and the antigens MPO and PR3 were discovered in 1988 and 1989, respectively. ANCA are antibodies directed against antigens in the cytoplasmic granules of neutrophils and monocytes. Cytoplasmic ANCA (c-ANCA) refers to diffuse granular cytoplasmic staining seen under Indirect Immunofluorescent Microscope. The target antien is Proteinase 3(PR3), a 29-kDa neutral serine proteinase present in neutrophil azurophilic granules. More than 90% of patients with WG have c-ANCA. Perinuclear ANCA (p-ANCA) which is targeted against Myeloperoxidase(MPO), occur as a more localized perinuclear or nuclear staining pattern under IIF microscopy. Other antigens producing p-ANCA pattern include elastase, cathepsin G, lactoferrin, lysozyme and BPI. P-ANCA occur in MPA, CSS, GPS, Crescentic glomerulonephritis and also in WG. Atypical ANCA(x-ANCA) with Snow-drift pattern in IIF, contains mixture of C- and P-ANCA pattern. These are nonspecific, directed against lactoferrin, lysozyme, beta-glucuronidase, cathepsin G, and so forth, found in Primary sclerosing cholangitis Primary biliary cirrhosis, Autoimmune hepatitis, SLE, RA, nonvasculitis conditions like Rheumatic and Nonrheumatic autoimmune diseases, inflammatory bowel disease, certain drugs, cystic fibrosis and bacterial endocarditis. Microscopic
Wegener's
Churg-Strauss Syndrome
PR3-ANCA
MPO-ANCA
Negative
ANCA titres are generally measured using ELISA and indirect immunofluorescence. 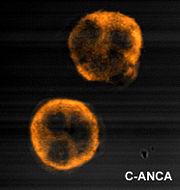 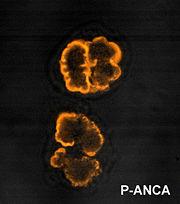 Development of ANCA It is poorly understood. There is probably a genetic contribution, particularly in genes controlling the level of immune response. Two possible mechanisms of ANCA development are postulated: Theory of molecular mimicry:Microbiaare molecules expressed by bacteria and
other microorganisms that have the power to stimulate a strong immune response by activation
of T-cells. These molecules generally have regions that resemble self-antigens – this is the theory
of molecular mimicry. Staphylococcal and streptococcal superantigens have been characterised
in autoimmune diseases – the classical example in post group A streptococcal rheumatic heart
disease, where there is similarity between M proteins of Streptococcus pyogenes to cardiac
myosin and laminin. It has also been shown that up to 70% of patients with Wegener's
granulomatosis are chronic nasal carriers of Staphylococcus aureus, with carriers having an eight
times increased risk of relapse.
Theory of defective apoptosis: Neutrophil apoptosis, or programmed cell death, is vital in
controlling the duration of the early inflammatory response, thus restricting damage to tissues by
the neutrophils. ANCA may be developed either via ineffective apoptosis or ineffective removal
of apoptotic cell fragments, leading to the exposure of the immune system to molecules normally
sequestered inside the cells.
Role in disease: It is unclear what the rôle of ANCA may be in these diseases – they may be markers of disease or may play some part in the pathogenic process. It has been shown that in Wegener's granulomatosis there is positive correlation between ANCA titre and disease activity and in vitro studies have shown that ANCA cause activation of primed neutrophils and react with endothelial cells expressing PR3. ANCA may act by causing release of lytic enzymes from the white blood cells, causing vasculitis. Cytoplasmic (cANCA)
Perinuclear (pANCA)
Granular cytoplasmic staining Homogenous perinuclear staining Antigens: PR3 (90%), MPO (5%), & BPI (4%)
Antigens: MPO (70%), lactoferrin (10), elastase
(8%), cathepsin G (5%) & PR3 (2%) cANCA disease association:
pANCA disease association:
Primary vasculitis Primary Systemic Vasculitis Wegener's granulomatosis Microscopic polyangitis (MPO) Microscopic polyangitis Churg-Strauss syndrome (MPO) Churg-Strauss syndrome Polyarteritis nodosa (MPO) Connective Tissue Diseases Felty's syndrome (lactoferrin) Systemic lupus erythematosus (lactoferrin) Rheumatiod arthritis (lMPO/lactoferrin) Sjögren's syndrome (MPO/lactoferrin) Chronic inflammatory bowel disease Ulcerative colitis (cathepsin G/elastase) Crohn's disease (elastase) Chronic liver disease Prim. Sclerosingcholangitis (cathepsinG) PATHOLOGY:
For a definitive diagnosis of vasculitis, the presence of vascular damage, particularly in the form of fibrinoid degeneration, is essential. Perivascular cellular infiltration is a common histological finding. Vasculitis may involve blood vessels of varying calibers and this feature forms the basis of a useful pathological classification of vasculitis. An infiltrate, composed of a variety of cell types, like neutrophils, lymphocytes, and histiocytes may invade the vessel wall and the surrounding tissue. Extravasation of red cells is a prominent feature in many vasculitides. In Takayasu Arteritis and GCA Granulomatous inflammation with giant cell formation is a characteristic feature. The signs and symptoms
The symptoms of vasculitis depend on which vessel and the particular organ involved by the inflammatory process. For example, GCA typically involves the medium– to large–sized blood vessels supplying the head and neck, but rarely involves the blood vessels of the kidneys. In contrast, Wegener's granulomatosis frequently involves the kidneys, very often the lungs, and almost always the upper respiratory tract, but rarely blood vessels to the brain. Buerger's disease involves the toes. Gangrene can result from a profound lack of blood flow. General signs and symptoms of vasculitis experience include: Fever, fatigue, weight loss > 10%, muscle and joint pain and loss of appetite.Each type of vasculitis can also cause specific signs and symptoms. Organ systems affected in Vasculitides: Skin: A variety of rashes, the most classic of which is "palpable purpura" –purplish–red spots, usually found on the legs. These spots can usually be felt by the examiner's fingertips, hence the descriptor "palpable". They tend to occur in "crops". 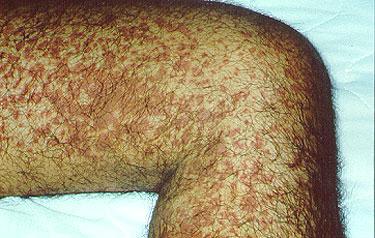 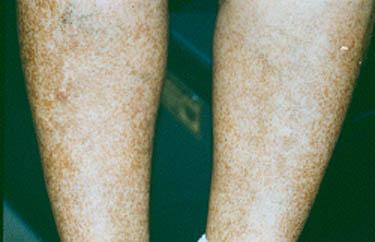 Repeated bouts of purpura may lead to hyperpigmented areas of the skin. Symptoms range from full–blown arthritis to aches in the joints without obvious swelling (arthralgias). Lungs Cough, hemoptysis, shortness of breath, a pneumonia–like appearance to a patient's chest X–ray, lung "infiltrates", and the development of cavities in the lungs. The X–ray shows fluffy infiltrates in both lungs, representing bleeding from damaged capillaries. 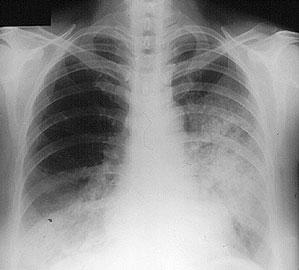 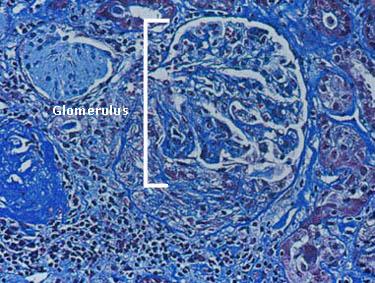 Microscopic hematuria, clumps of red blood cells (known as "casts"), and Proteinuria. Renal damae may lead to renal insufficiency and the requirement of dialysis. Depicted in the figure below is a single glomerulus (the filtering unit of the kidneys; each kidney has approximately 1 million glomeruli). This glomerulus is involved actively by an inflammatory process, particularly evident in the bottom of the figure. Gastrointestinal Tract Abdominal pain, bloody diarrhea, perforation of the intestines. 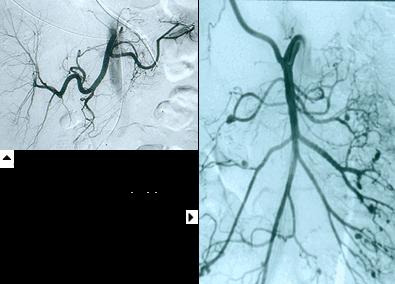 Blood Anemia (Normochromic, normocytic), a slightly elevated white blood cell count, elevated ESR and CRP. Sinuses, Nose and Ears Chronic sinusitis that persist for longer than they should; hearing loss; inflammation of the nasal septum, sometimes resulting in a perforation or collapse of the bridge of the nose. Eyes May affect either blood vessels to the eyes, causing the sudden loss of vision, or small blood vessels within the eyes, leading to retinal problems, thinning of the sclera, uveitis and conjunctivitis. Headaches, strokes, changes in cognition, difficulty with coordination r locomotion. Paraesthesias, pains in the arms and legs, numbness, and asymmetrical weakness (Mononeuritis Multiplex). One of the least invasive ways of making the diagnosis. A minor procedure performed under local anesthesia. The wound is closed with 1–2 stitches that are removed 7–10 days later. 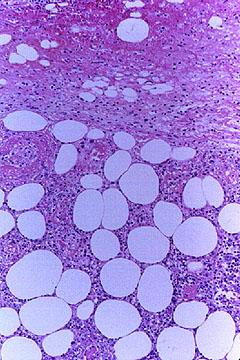 Diagnosis, Treatment and Monitoring of Hyperadrenocorticism CAUTION: Federal (USA) law restricts this drug to use by or on the order of a licensed veterinarian. As with all drugs, side effects may occur. In field studies and post- approval experience, the most common side effects reported were: anorexia, lethargy/depression, vomiting, diarrhea, elevated liver enzymes, elevated potassium with or