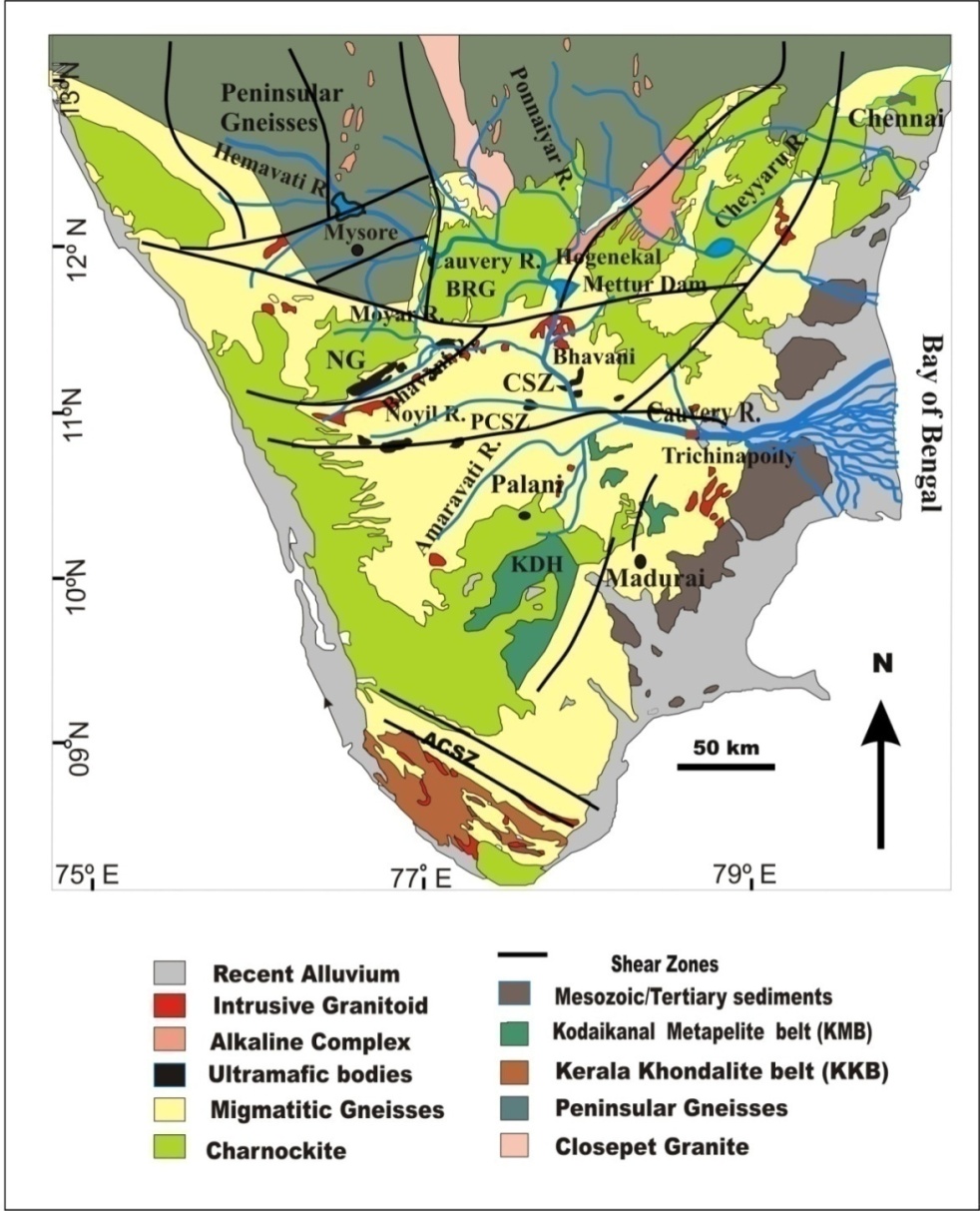 MOHAPATRA, A. KRISHNAMURTHY, P. SRINIVASAN, P. SINGH, P. P. DAS Fig. 1. Geological map of Cauvery river basin modified after Santosh et al., (2009) showing different sedimentary units and high altitude hill regions. NG - Nilgiri Hills, BRG -Biligirirangan Hills, KDH- Kodaikanal Hills, PCSZ - Palaghat-Cauvery Shear Zone, CSZ-Cauvery Shear Zone, ACSZ- Achankovil shear zone. Pollen preparation
The pollen is extremely resistant to decay and is often preserved for thousands of years (Faegri and Iversen, 1975). The pollen grains consist of two layers- exine, composed of Sporopollenin (Zetzsche, 1932) with little Polysaccharides (Rowley et al, 1981) and intine composed of Cellulose. During fossilisation only exine gets preserved retaining the characteristic morphology of the plant taxon. Palynological protocol, adapted from Faegri and Iversen (1975), was followed for processing of pollen with slight modifications. The whole procedure is given in chart.3.1. First 5g to 6g of sample from the master core were taken for analysis. Recoveries of the core sediment, quality of samples (clay rich) as well as the interest in special core section were taken into account for the number of sub samples to be considered. The selected samples were taken for oven drying for duration of 24 to 48 hours at 40 to 45°C. The oven dried samples were then crushed in a hand agate mortar for breaking up the lumps and to make samples consistent and 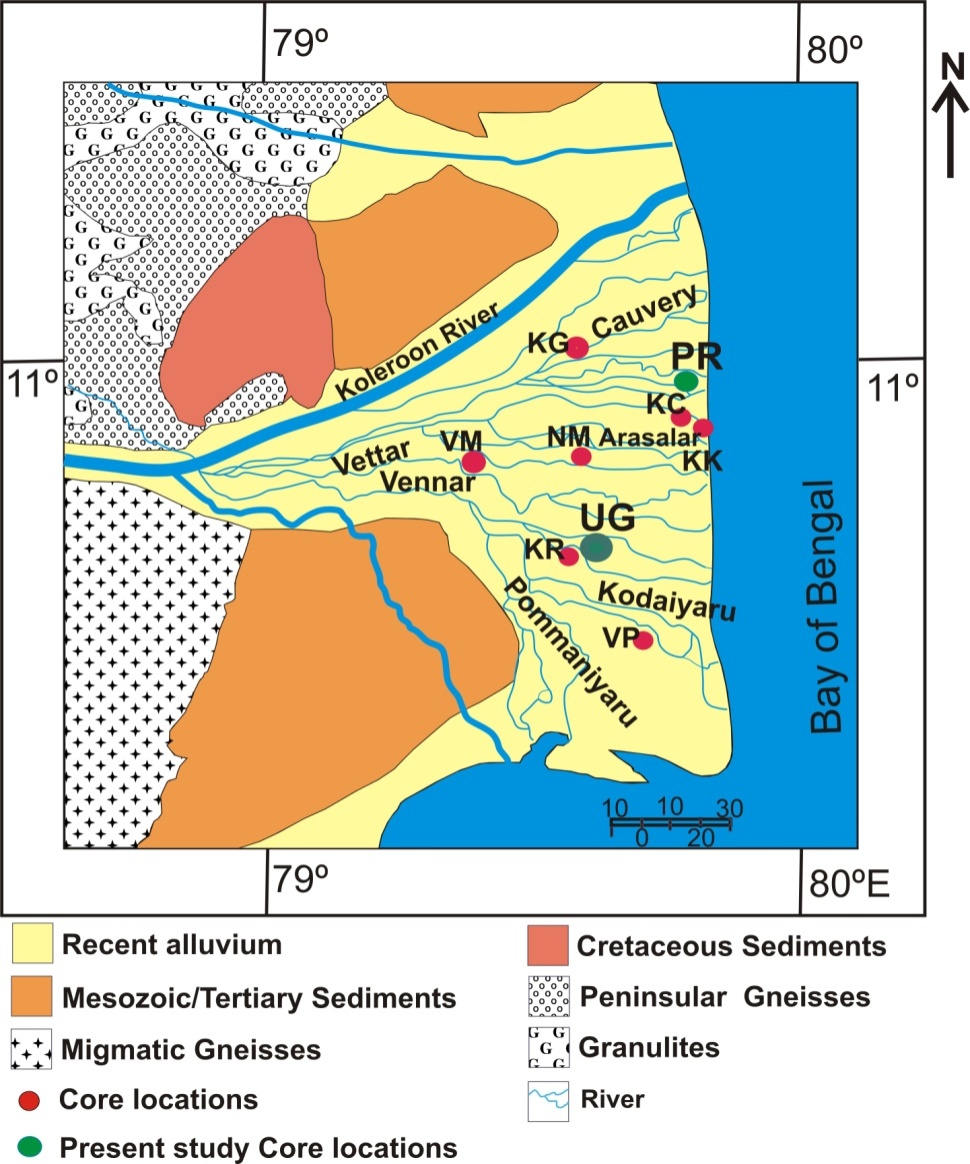 A PALYNOLOGICAL INVESTIGATION OF QUATERNARY SEDIMENT CORE FROM CAUVERY DELTA uniform. This was followed by suspending the powdered samples in distilled water and constant stirring by a magnetic stirrer for effective dispersion of the sediments. Fig. 2. Map showing Cauvery river basin Geology, locating the studied cores UG- Uttrangudi and PR- Porayar and other drilled cores locations, VP- Vadapadi, VM-Valangaiman, NM-Nannilam, KK-Karaikal, KC-Kottucheri west, KR-Keeralthur, KG- Kadalangudi in the delta. The solution was then subjected to wet-sieving with a 150µm mesh. Sample fractions less than 150µm were collected into a 500ml glass beaker with a Teflon funnel and those greater than 150µm were discarded. This sieved sample solution was then centrifuged for 3 to 4 minutes at 2000 to 2500 rpm and the supernatant liquid was discarded. An addition of 10% potassium Hydroxide (KOH) was made to the sample residue and the sample was subjected to heating in a water bath for 5 minutes to remove humic material such as unsaturated organic soil colloids and humic acids. This process is also helpful in removing various particles of less than 3µm that interfere with pollen in organic rich sediments. The sample was then added with 10% Hydrochloric acid (HCl) to dissolve Carbonate materials. The above processes were repeated until all reactions were brought to an end. The sample, after this pre-treatment, was treated with 40 to 60 ml of 48% Hydrofluoric acid (HF) in polypropylene 100 ml tubes for 36 to 48 hours in order to dissolve silica (SiO2) with intermittent stirring and 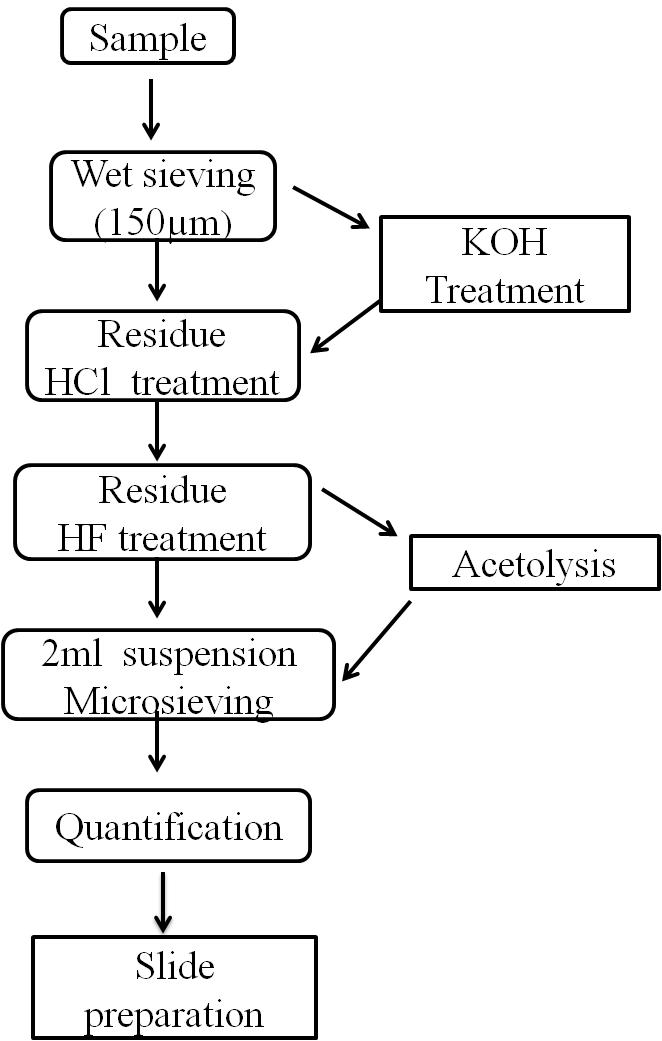 Ford offers the power of choice with fuel-efficient and fun-to-drive vehicles. PLUG -IN HYBRID Ford Electrified Vehicles Put the Power in Your Hands Whether you want to save on fuel, reduce your carbon footprint or be part of the electric evolution, you have an Learn more online interest in electrified vehicles (EVs). No matter the reason,

National stroke services must address all elements of care of patients with cerebrovascular disease and stroke from prevention, acute treatment, non-acute treatment, rehabilitation and continuing and palliative care

Irish Heart Foundation: Council for Stroke National Clinical Guidelines and Recommendations for the Care of People with Stroke and Transient Ischaemic Attack Revised Version March 2010 Foreword 18 months ago the Irish Heart Foundation published an audit of stroke services in the Republic of Ireland. The audit revealed what many had suspected. Adequate services and facilities to prevent, asses and treat the yearly toll of10,000 victims of stroke are not available to most of our population. Even when supposedly available they are often seriously deficient. Only one hospital had a stroke unit. The Rehabilitation services were often poorly organised and uncoordinated. The end result was that most patients with acute stroke received care which was less than optimal and were not accorded the timely rehabilitation which plays a major part in preventing long-term disability. The Stroke Council of the Irish Heart Foundation addressed the issues raised by the audit. It set up a working party to produce a comprehensive strategy for the development of a service in line with best international practice adapted to Irish conditions. The result, prepared over the last 18 months is this document. It sets out a strategy for the prevention, treatment and management of stroke. It shows that strokes may be prevented, that warning signs are often ignored and that simple population educational measures can be very effective in reducing numbers of victims. The establishment of proper assessment units for the prompt management of patients suffering transient ischaemic attacks is one of the key points of this preventive strategy. Prompt treatment reduces mortality from acute stroke and t disability levels amongst survivors. The key to this is rapid assessment of the stroke victim, the provision of thrombolytic therapy where appropriate and the organisation of Accident and Emergency departments to deal effectively with the victims and to direct them to designated stroke units. Such units provide immediate care, close monitoring of and appropriate intervention in the evolving stroke. The physical grouping of patients in such units ensures that rehabilitation can be provided in a timely fashion and the many disciplines involved can be organised in such a way as to ensure that this is done to provide optimal benefit. The patient can progress seamlessly from the acute event through early rehabilitation into properly organised appropriate rehabilitation programs and back to the community. Stroke at this stage has elements of a chronic illness, and ongoing nursing, medical and therapist support is required, both at home, and for an important minority of those affected, in nursing homes. The report deals with the role of allied and health professionals, nurses, doctors and primary care centres in this process. Central to this concept is the creation of stroke networks. Networks embrace all the hospitals, services and individuals providing care at every stage of the process. Care of the acute stroke victim begins in the ambulance, continues through thrombolysis, early recognition and assessment in the accident and emergency departments, stroke unit and the provision of internationally acceptable levels of ongoing care. Such a service could save up to 350 lives a year and substantially reduce the number of those suffering from major disability. As medical director of the Irish heart foundation I have watched with admiration the way in which so many people, far too numerous from me to acknowledge individually, have worked together to produce this report. They are drawn from all the disciplines associated with the care of the stroke patient and were joined by others