Over 75% of toxicology studies are currently conducted in-house within Big Pharma setups. It comes as no surprise then that toxicity has not been receiving the attention it requires, since Big Pharma's large and unwieldy R&D setups are not the most conducive for effective discovery and development. However, as pharmaceutical and biotech companies consolidate and step-up their focus on improving R&D productivity and drug-safety-assessment, the emphasis on outsourcing toxicology studies is bound to increase. We expect that outsourcing levels could reach 35 - 40% in 2015, driven by profit-pressures caused by patent expirations and the need to deliver consolidation benefits on pricey M&A deals. Exhibit 5a: Global toxicology market (USD bn)
Exhibit 5b: Outsourced toxicology market (USD bn)

The global market for outsourced toxicology services is highly fragmented with only two major players, Covance and Charles River Laboratories. There are a handful of mid-sized players, including the likes of MPI, Harlan, LSR and Ricerca, followed by numerous small players. Pure in-vitro players include Ceetox, Caliper, Iconix, Celsis, etc. We also have another category of players who are engaged in developing software models to predict toxicity effects of a compound (also known as in-silico or predictive toxicology). This is a fast-growing field since innovators have started using in-silico methods to supplement traditional toxicity studies. 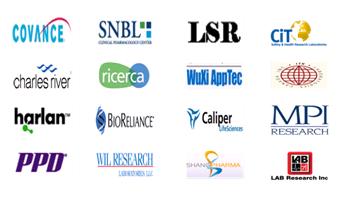 India's presence in the preclinical development domain has been historically limited to medicinal/ discovery chemistry. As of 2009, the total Indian export of preclinical services (discovery + development) was dominated by discovery chemistry (at 78% of the total), followed by discovery biology (at 15% of the total) and toxicology services trailing with a mere 8% contribution to the total kitty. However, with the expanding global requirement for low-cost and world-class toxicology

services, preclinical toxicology services are projected to account for as much as 15% of total preclinical service exports from India by 2015, with preclinical toxicology projected to grow > 30% p.a. during this period. Exhibit 8: Growth projections for Pharmaceutical contract R&D from India
2009-15 CAGR 33%
2009-15 CAGR 41%
2009-15 CAGR 15%
Discovery Chemistry Discovery Biology Preclinical Toxicology Indian companies providing pre-IND toxicology services can be divided into three broad segments. Firstly, there are over 10
CROs that provide non-GLP tox studies to aid lead optimization/candidate selection as part of the overall discovery process.
Secondly, we have 5-6 CROs that are capable of providing selected GLP tox services that enable an IND submission. Lastly, we
have CROs that provide end-to-end services required to deliver an IND package. The (GLP) Regulatory Animal toxicology
landscape in India is dominated by Advinus, which remains the "go-to" player for customers seeking a vendor who can deliver
end-to-end services from candidate-selection to IND filing.
Exhibit 9: Indian service-provider landscape in the pre-IND toxicology space

About Avendus
Avendus Capital (Avendus) is a leading financial services firm with a strong transaction record and established relationships
with companies and investors. Avendus has been consistently ranked among the top-five corporate finance advisors in India.
The firm is also a leading syndicator of private equity deals in India. Avendus uses its unique domain and industry-focused
approach in businesses such as M&A advisory, private placements for growing companies, structured finance advisory, equity
capital markets, institutional broking, alternative asset management and wealth management. Avendus has emerged as the
advisor of choice for cross-border M&A deals, having completed more than 30 Indo-US and Indo-Europe deals in the past
three years. Headquartered in Mumbai, Avendus has offices in New Delhi, Bangalore, New York and London.
For more information, please vis