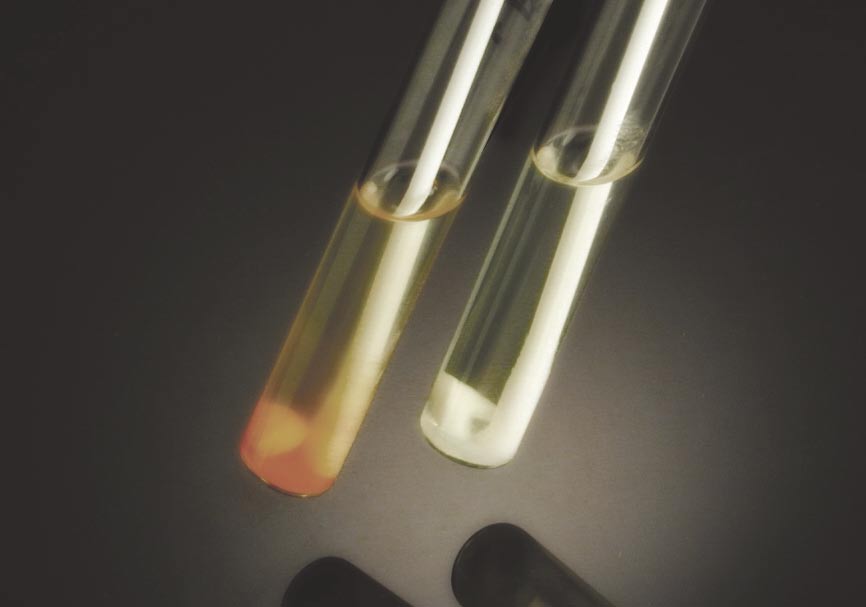 J.R. DiPersio, J. Beach and L. Deﬁne Summa Health System, Akron, OH Background: Group B Streptococcus (GBS) remains
Group B Streptococcus (GBS) remains one of the Vaginal/rectal swabs were collected using the BBL CultureSwab™ (dual swab) Collection & Transport System (Becton one of the leading causes of sepsis and meningitis in leading causes of sepsis and meningitis in newborns Dickinson). One swab was used to inoculate a tube of LIM broth (BD) and the other to inoculate a tube of StrepB newborns despite recent advances in the prevention despite recent advances in the prevention of neonatal Carrot Broth™ (Hardy Diagnostics) following manufactures directions. One hundred vaginal/rectal patient specimens of neonatal group B streptococcal disease. The current group B streptococcal disease. Approximately 10- were cultured in parallel using both methods. CDC recommended OBGYN screening method 30% of pregnant women are asymptomatic carriers involves use of a selective broth such as LIM or Trans- of GBS, which represents a risk to the newborn. The All LIM and StrepB Carrot Broth™ tubes were sub-cultured onto blood agar following incubation for up to 24 hrs at Vag, but several alternative methods such as StrepB CDC currently recommends OBGYN screening for 35°C. Blood agar plates were streaked like a urine culture using a 0.001 ml loop; ﬁrst down the center of the plate, Carrot Broth™ have been developed with comparable intrapartum GBS colonization at 35–37 weeks gestation. followed by cross streaking. Plates were incubated at 35°C for 24-48 hrs.
sensitivity, speciﬁcity, and reduced turnaround time. Culture based methods involve the inoculation of vaginal/rectal specimens into a selective broth such as LIM and/or StrepB Carrot Broth™ tubes, initially positive for GBS were held at room temperature and sub-cultured Purpose: This study evaluated the ability of StrepB
LIM or Trans-Vag, followed by subculture onto blood onto blood agar at periodic intervals (usually 3x weekly) until two successive subcultures failed to yield identiﬁable Carrot Broth™ and standard LIM Broth to maintain agar. Several alternative methods such as StrepB GBS colonies. Suspected GBS colonies as well as normal ﬂora colonies were semi-quantitated (no growth to 4+ the viability of GBS over time following specimen Carrot Broth™ have been developed with comparable inoculation. Use of these broths as a storage medium sensitivity, speciﬁcity, and reduced turnaround time. would facilitate antimicrobial susceptibility testing at a Newer molecular methods of detection are also now in later date if penicillin-allergic patients are not identiﬁed use for this purpose. Identiﬁcation of women colonized at the time of culture. with GBS around the time of delivery allows physicians Each broth system detected the same 21 GBS positive patients out of the 101 patient specimens tested. Results of to better assess the need for prophylactic antimicrobial sequential subcultures are shown in table 1. Survival in LIM Broth ranged from 13 to 90 days (avg = 32 days) and Methods: One hundred vaginal/rectal patient
1. Both broth systems maintained the viability of GBS survival in StrepB Carrot Broth™ ranged from 15 to 113 days (avg = 51 days). GBS survival in StrepB Carrot Broth™ specimens were cultured in parallel using both broth for at least 13 days at room temperature and usually was longer than in LIM broth for 19 of 21 positive patients.
methods. Each broth system detected the same 21 GBS Penicillin is the preferred agent for use against GBS and much longer.
positive patients (using manufacturers' recommended conﬁrmed resistance has not been observed to date. procedures). Positive broths were held at room Anaphylaxis associated with GBS prophylaxis is rare but 2. StrepB Carrot Broth™ maintained viability much Table 1. Recovery Rates of GBS from StrepB Carrot Broth™ and LIM Broth Over Time
temperature and further evaluated for long-term GBS alternative treatment with a non-beta lactam antibiotic longer than LIM broth (average of 51 days vs. 32 days Lim Broth
recovery by subculturing onto SBA for semi-quantitation may be warranted in penicillin- allergic women at high StrepB Carrot BrothTM Color
StrepB Carrot BrothTM
respectively).
Number of Days
risk. Macrolide and lincosamide class drugs may be Number of Days positive
used as alternatives to Penicillin but in-vitro antimicrobial 3. Use of either broth as a storage medium should allow Results: GBS were recovered from either broth system
susceptibility testing (AST) of GBS is recommended adequate time for follow-up AST by the laboratory if for a minimum of 13 days and usually much longer. GBS due to rising rates of resistance. Some laboratories survival in StrepB Carrot Broth™ averaged 51 days perform routine AST on all GBS while others perform (range 15 to 113 days) and GBS survival in LIM Broth testing only when Penicillin allergy is noted at the time of averaged 32 days (range 13 to 90 days). GBS survival specimen processing. If AST is not routinely performed in StrepB Carrot Broth™ was longer than in LIM broth on all GBS isolates, the laboratory should hold isolates 1. Schrag et al. (2002) Prevention of perinatal group B for 19 of 21 positive specimens. In 2 of 21 specimens, for a reasonable amount of time for possible additional streptococcal disease. Revised guidelines from CDC. GBS survived longer in LIM Broth. testing requests even after culture results are ﬁnalized. MMWR Recomm. Rep. 51:1-23.
Conclusion: Both broth systems maintained the
The purpose of this study was to evaluate the ability 2. Schreckenberger et al. (2005) Evaluation of StrepB viability of GBS at room temperature for at least 13 days of StrepB Carrot Broth™ and standard LIM Broth Carrot Broth™ and LIM broth methods for recovery and usually much longer, but StrepB Carrot Broth™ to maintain the viability of GBS over time following of group B streptococci (GBS). Results of a multi- maintained viability longer than LIM broth for most GBS specimen inoculation. Use of these broths as a center trial. Abstracts of the Annual Meeting of the isolates. Use of these broths as a storage medium storage/holding medium would facilitate antimicrobial ASM (C-109).
should allow adequate time for follow-up testing when susceptibility testing at a later date if penicillin-allergic patients are not identiﬁed at the time of culture.
3. DiPersio L, and J. DiPersio. 2006. High rates of erythromycin and clindamycin resistance among OBGYN isolates of group B Streptococcus. Diag. Microbiol. Infec.t Dis. 54:79-82.

Early anti-pseudomonal acquisition in young patients with cystic fibrosis: rationale and design of the epic clinical trial and observational study,