Executive summary. on the brink of death. violence against women and the abortion ban in el salvador. 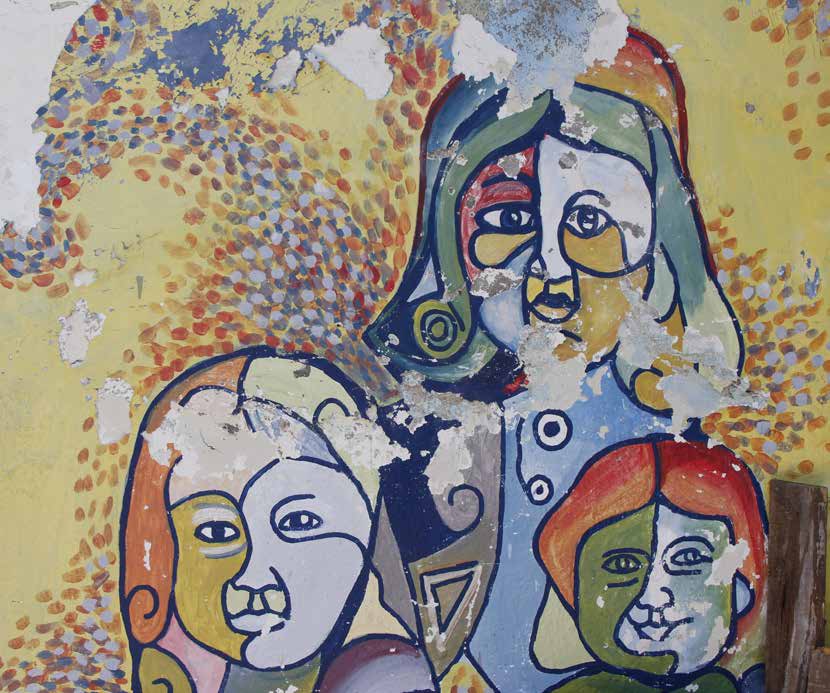 El Salvador's total abortion ban places women and girls on the brink of death. It also severely
compromises the health and wellbeing of thousands who are forced to rely on unsafe clandestine abortions, who have suffered miscarriage, or who have been raped. It leads to the arbitrary and unjust imprisonment of women and girls for ‘crimes' which in reality amount to attempting to exercise their basic human rights. The failure of the Salvadoran government to address damaging cultural norms that marginalize and restrict the lives of women and girls, as well as their refusal to properly address the inescapable barriers to modern contraception and effective sexuality education, condemns generations of young women to a future shaped by inequality, discrimination, limited choices and restricted freedoms.
Amnesty International's findings provide a glimpse into the pervading cultural and
institutional barriers that women and girls in El Salvador face to exercising their human rights, particularly those barriers that obstruct the realization of their sexual and reproductive rights. The testimonies of the women and others who spoke to Amnesty International illustrate in explicit and distressing terms the terrible cost that these barriers exact on women and girls on a daily basis in terms of their health, personal freedoms, socio-economic circumstances and mortality. They also demonstrate how gender equality cannot become a reality in El Salvador as long as cultural prejudices and prevalent gender stereotypes are enshrined and promoted through reckless, discriminatory laws and institutional practices. The government of El Salvador has committed to the advancement of the rights of women and girls through the adoption of a wide range of international and regional human rights treaties and global agreements. However, these commitments are rendered meaningless by the systematic failure to address legal, institutional and societal discrimination and violence against women in the country. More information on the relevant human rights legal framework can be found in the report that accompanies this summary (Index: AMR 29/003/2014). The following recommendations outline what the Salvadoran government must now do to honour its human rights obligations and effectively respect, protect and fulfil the rights of women and girls. Amnesty International September 2014 Index: AMR 29/004/2014 ON THE BRINK OF DEATH: 17 VIOLENCE AGAINST WOMEN AND THE ABORTION BAN IN EL SALVADOR EXECUTIVE SUMMARY RECOMMENDATIONS

Amnesty International calls on the Salvadoran authorities to take legislative and educational
measures towards eliminating harmful and discriminatory gender stereotypes throughout society, including in the criminal justice system, and to pay particular attention to vulnerable groups, such as girls and those living in poverty. Amnesty International calls on the Salvadoran authorities to:
1. Ensure access to safe and legal abortion
Repeal laws criminalizing abortion; ensuring the elimination of punitive measures for women and girls seeking abortion, and for health care providers and others performing abortions or assisting in obtaining such services where consent is fully given; Ensure access to abortion both in law and in practice, at a minimum, in cases where pregnancy poses a risk to the life or to the physical or mental health of a pregnant woman or girl, in cases where the foetus will be unable to survive outside the womb, and in cases where the pregnancy is the result of rape or incest; Ensure that all laws and practices establish the duty of health providers to respect patient confidentiality, including by not reporting women suspected of undergoing abortions and those who have had miscarriages to law enforcement authorities. Ensure that all staff working in the health care system are aware of this legal obligation and impose sanctions on those failing to comply.
2. Imprisonment of women in connection with pregnancy-related issues
Immediately and unconditionally release all women and girls who have been imprisoned in relation to undergoing abortions or for having miscarriages, including those convicted of abortion, homicide, aggravated homicide or any other crimes. Ensure that such women and girls, as well as those serving non-custodial sentences, are not left with a criminal record; Drop charges against women and girls whose cases are pending trial in relation to undergoing an abortion or having a miscarriage, and immediately and unconditionally release any of them who are detained; Until relevant laws are changed, cease investigating and charging women and girls in relation to undergoing abortions or for having miscarriages; When considering the pardon petition submitted by the human rights group Agrupación Ciudadana in relation to women imprisoned for other pregnancy-related issues, assess if convictions were a result of unfair proceedings. In particular, examine the following: Whether the woman was informed of her rights prior to questioning; Whether the woman had access to effective and timely legal representation; Whether the woman was questioned while lucid, including not under the effects Index: AMR 29/004/2014 Amnesty International September 2014 18 ON THE BRINK OF DEATH: VIOLENCE AGAINST WOMEN AND THE ABORTION BAN IN EL SALVADOR EXECUTIVE SUMMARY of anaesthetic, severe blood loss or while in shock; Whether forensic evidence met acceptable scientific standards, and whether forensic and other evidence against these women was incomplete, contradictory or Whether any of the women were suffering from a mental health disorder or condition at the time the events occurred; Whether the law enforcement and justice officials involved in the cases complied with their professional obligations to non-discrimination and ensuring equality before the law, including not relying on discriminatory gender stereotypes when fulfilling their job duties.
3. Guarantee access to modern contraceptive information and services
Ensure that all women, including young women can access contraceptive information and services, including the full-range of quality modern methods of contraception, including emergency contraception; Ensure access to youth-friendly, confidential sexual and reproductive health information and services, including by repealing laws and stopping practices which mandate parental or guardian consent for accessing contraception; Provide comprehensive, accurate and non-discriminatory sexuality education both inside and outside the formal education system.

4. Fully implement and resource the 2012 Special Integral Law for a Life Free from Violence for
Ensure that all state bodies tasked with the implementation of the 2012 Special Integral Law and other related legislation designed to promote and protect women's rights have the necessary resources to carry out their roles and that they are trained in the application of the 2012 Special Integral Law and in gender sensitivity and non-discrimination; Ensure that a single coherent system of data collection is available and operational, in order to properly assess the scale and nature of violence against women and girls; Ensure that additional shelters are made available across the country for women and their children fleeing gender-based violence; Ensure that any official who allows, promotes or tolerates impunity for, or who blocks investigation of crimes of violence against women faces a sanction for doing so, as articulated in Article 4 of the 2012 Special Integral Law Amnesty International September 2014 Index: AMR 29/004/2014 WHETHER IN A HIGH-PROFILE CONFLICT
OR A FORGOTTEN CORNER OF THE
GLOBE, AMNESTY INTERNATIONAL
CAMPAIGNS FOR JUSTICE, FREEDOM
AND DIGNITY FOR ALL AND SEEKS TO
GALVANIZE PUBLIC SUPPORT TO BUILD
A BETTER WORLD
WHAT CAN YOU DO?
Activists around the world have shown that it is possible to resist the dangerous forces that are undermining human rights. Be part of this movement. Combat those who peddle fear and hate.
• Join Amnesty International and become part of a worldwide movement campaigning for an end to human rights violations. Help us make a difference.
• Make a donation to support Amnesty International's work.
Together we can make our voices heard.
I am interested in receiving further information on becoming a member of Amnesty International I wish to make a donation to Amnesty International (donations will be taken in UK£, US$ or €) Please return this form to the Amnesty International office in your country.
For Amnesty International offices worldwide: www.amnesty.org/en/worldwide-sitesIf there is not an Amnesty International office in your country, please return this form to: Amnesty International, International Secretariat, Peter Benenson House,
1 Easton Street, London WC1X 0DW, United Kingdom
ON THE BRINK
VIOLENCE AGAINST WOMEN AND THE
ABORTION BAN IN EL SALVADOR
Persistent gender discrimination and inequality are at the root
of women's and girls' inability to exercise their human rights in
El Salvador.
Every year, thousands of women and girls are denied their
rights and choices by El Salvador's total ban on abortion and
its criminalization. Women and girls who are carrying an
unwanted pregnancy are confronted with two options: commit
a crime by terminating the pregnancy, or continue with the
unwanted pregnancy. Both options have life-long and potentially
devastating implications. The number of girls and young
women facing this choice is exacerbated by the failure to
provide comprehensive sexuality education and quality, modern
contraception.
These restrictions are serious violations of the human rights of
women and girls and must be dealt with as a matter of urgency.
The Salvadoran government is ultimately responsible for the
deaths of women and girls denied an abortion and for thousands
of others whose human rights have been violated as a result of
the country's total abortion ban.
This executive summary outlines the barriers faced by women
and girls in El Salvador in exercising their rights, particularly
those barriers that obstruct the realization of their sexual and
reproductive rights. It includes testimony from health experts,
women's rights defenders and the women themselves. This
executive summary accompanies the report of the same
name, which provides further detail, testimony and analysis
of these issues.
September 2014

Mobile audio assistance in bus transportation for the blind J H Sánchez and C A Oyarzún Department of Computer Science, University of Chile, Blanco Encalada 2120, Santiago, CHILE ABSTRACT People with visual disabilities have serious difficulties when mobilizing through the city on the public transportation system. We introduce AudioTransantiago, a handheld application that allows users to plan trips and provide contextual information during the journey through the use of synthesized voices. The usability and cognitive evaluation of AudioTransantiago was performed using a prototype evaluation in order to identify and solve usability issues, ending up with an intuitive and simple interface. Finally, a cognitive impact evaluation administered during bus trips taken with the assistance of AudioTransantiago demonstrated that the software provides more autonomy and effectiveness for users' trips, improving their orientation and mobility.